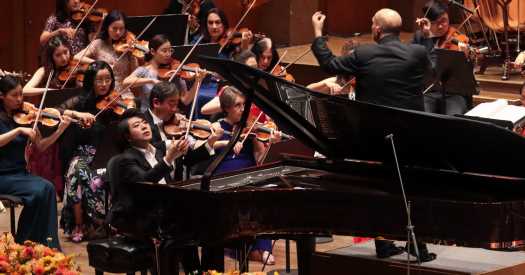 Lang Lang, piano superstar and Billy Joel jam partner, is back on the gala circuit.

But as this notoriously flamboyant performer slowly returns to the stage — after a left-hand injury in 2017 stalled his career for over a year — he also wants to make it known that his rehabilitation has been more than just a matter of tendons and ligaments.

“I used the time,” he told The New York Times this summer, “to rethink everything I do.”

It’s a sign that Mr. Lang, now in his late 30s, might be entering a more mature and thoughtful phase — a case he made with mixed success on Monday at the New York Philharmonic’s fall gala, his first post-recovery concerto appearance in the city.

The program, a Beethoven double bill, was a surprisingly conservative choice for an orchestra that has otherwise smartly eschewed celebrations of the 250th anniversary of that composer’s birth. This season features the start of Project 19, an initiative to commission 19 new works from women, in honor of the 19th Amendment’s centennial; why not give a preview of that?

For his New York re-entry, Mr. Lang chose Beethoven’s Piano Concerto No. 2 — not a far cry from the Mozart of his comeback concert at Tanglewood in 2018, and certainly less of a vehicle for his theatrical style than the Romantic war horses that made him famous. Indeed, the piece’s comparatively modest Classicism defies showiness, with demands that are more intellectual than athletic.

Which is why Mr. Lang’s hammy habits felt so out of place as they crept into a performance that otherwise had moments of exquisite restraint. During the fleet-footed first movement, he ended a gentle upward scale with a flick of the wrist; after another run, his hands took flight off the keyboard. His arms raised high, he had the look of a soloist conducting from the piano, sometimes in conflict with the stately, controlled orchestral accompaniment led by Jaap van Zweden.

These gestures often felt more like effects than insights — and occasionally entered the realm of dubious interpretation, artificially heightening the music’s vigor. Mr. Lang’s interventions were most apt in the second movement, which he played like a richly expressive aria. He has never been skilled at pedalwork; but here, in one of the movement’s final solos, his softened and sustained voicing lent a fuzziness to the melody, like the memory of a song from childhood.

As if to overstate his recovery, though, Mr. Lang blazed through the Rondo finale, deflating its buoyancy in a breathless dash. I wonder how much of the speed — fast enough, at times, to muddle the melody — was the doing of Mr. van Zweden, who showed no signs of slowing in the hellfire reading of Beethoven’s Fifth Symphony that followed.

Mr. van Zweden’s inexhaustible intensity — crisply delivered by the Philharmonic players, much more so than in their 2018 recording of the symphony with him — had an edge-of-your-seat excitement that dimmed with each movement. With the baseline already at boiling from the start, where else can you go? He did push even further, in the finale, but he ended up pitching his baton into the viola section.

Joshua Barone is a senior staff editor on the Culture Desk, where he writes about classical music and other fields including dance, theater and visual art and architecture. @joshbarone • Facebook