It’s almost a month before New Year’s Eve, but as audience members left the Metropolitan Opera on Tuesday evening, they received free little bottles of sparkling wine. Confetti was blasted at the curtain calls.

What was the momentous event? Nothing less than the start of a new period in the Met’s history: the Yannick Nézet-Séguin era.

[Read about Yannick Nézet-Séguin’s bold plans for the Met.]

To begin his tenure as the company’s music director, Mr. Nézet-Séguin led an uncommonly fine rendition of Verdi’s “La Traviata,” in a new staging by Michael Mayer that stars the soprano Diana Damrau and the tenor Juan Diego Flórez. And in a rare gesture of respect and good will, the Met’s musicians joined Mr. Nézet-Séguin on stage for a bow after the show.

After the company’s traumatic break earlier this year with its former music director, James Levine, over allegations of sexual misconduct — which Mr. Levine denies — it’s no surprise the Met would want to turn the page and break out the bubbly. And on Tuesday it was well deserved. Since making his Met debut in 2009, Mr. Nézet-Séguin has proved his excellence in nearly 70 performances. I expected his “Traviata” to be good, but not this good.

[Our critics choose the best classical music of 2018]

During the poignant music that opens the prelude to Act I, Mr. Nézet-Séguin drew radiant yet delicate playing from the strings. Then he shaped the melody that unfolds in sighing, descending phrases with elegance and refinement.

A little later, during the duet when the passionate young Alfredo expresses his long-brewing love to the courtesan Violetta, Mr. Nézet-Séguin excelled at the most essential requirement for a Verdi conductor: the ability to keep a simple oom-pah-pah accompaniment in the orchestra steady and undulant, while giving the singers just enough leeway to expressively bend vocal lines. Then, in moments of intensity, he drew vehemence without a trace of melodramatic excess. 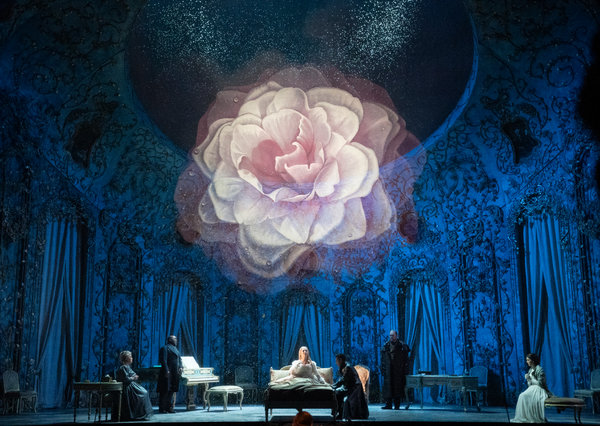 Mr. Mayer — who made his Met debut in 2013 with a “Rigoletto” updated to 1960s Las Vegas and recently staged Nico Muhly’s “Marnie” — has said he wanted to capture the mix of romantic and decadent elements of “Traviata.” He presents the opera, as other directors have, as the memories of Violetta, who is seen dying in bed during the prelude.

The action take place in a semicircular room with an opening at the top, designed by Christine Jones. The turquoise walls are covered with leafy gold filigree that sometimes seems to separate from the walls and close in on Violetta, emphasizing the social pressures on her and her status as a kept woman.

In every scene — Violetta’s Paris home, her escape in the country, her friend Flora’s place — we see Violetta’s bed in the middle, her piano and dressing table at the rear. The production suggests that all the action has merged in her recollection as, dying, she flashes back to the events of her life.

For all its decadent touches — slightly garish, Day-Glo costumes in the party scenes (designed by Susan Hilferty); steamy ballet dancers who perform for the guests at Flora’s party — Mr. Mayer’s production is essentially a traditional staging set in the mid-19th century. But the imagery is not that involving, especially in comparison with the boldly surreal, excitingly provocative Willy Decker staging it’s replacing. If a production is going to rely on what’s in effect a unit set, it would be better for that set to be more visually interesting.

The singing, though, was wonderful. In a recent interview, Mr. Nézet-Séguin said that he had encouraged Mr. Flórez, as Alfredo, to sing the well-known toast “Libiamo” with lyrical grace and hint of shyness. Those qualities came through in Mr. Flórez’s lovely performance.

He has slowly been moving out of his comfort zone in the florid bel canto repertory, toward roles that require more weight and carrying power. His voice was a little light in comparison with some classic Alfredos. Still, I loved the lyrical nuances he brought out in the music, the clarity of his execution, and the honesty of his singing. He sounded fresh and rich, and he looked adorably youthful; in moments of jealous passion, he was a convincing hothead.

Ms. Damrau was an extraordinary Violetta, singing with big, plush yet focused sound, taking enormous but well-calculated dramatic liberties during Violetta’s moments of soulful reflection and wrenching despair over her illness. The solid, robust baritone Quinn Kelsey was grave and formidable as Germont, Alfredo’s father, though the crucial scene with Violetta was nearly ruined by an ill-considered directorial touch.

Germont tells Violetta that he has a daughter at home whose engagement is jeopardized by the family scandal Alfredo has created. In this production, Germont brings his daughter, played by a silent actor, onstage with him. But Germont would never expose his daughter to a woman like Violetta. And the tragic poignancy of Violetta’s sacrifice when she agrees to give up Alfredo comes from her imagining that young woman’s predicament. The daughter is more real when we don’t see her.

Even if it was in traditional style, the Met has opened a new chapter with this “Traviata.” Early this season, Mr. Nézet-Séguin and the Met’s general manager, Peter Gelb, laid out ambitious plans, including commissions, unusual repertory and collaborations with Mr. Nézet-Séguin’s Philadelphia Orchestra.

But the company’s music director’s job, of course, also involves leading performances of staples like “La Traviata.” How did he do? Splendidly.

La Traviata
Through Dec. 29, and returning in April with a different conductor and cast at the Metropolitan Opera, Manhattan; 212-362-6000, metopera.org.