What does it mean to say an actor is radiant in a role?

In the case of Heather Raffo’s performance as the title character in “Noura,” which opened on Monday at Playwrights Horizons, it doesn’t mean outgoing or gracious or glamorous. In fact, Noura is pensive and prickly. And though she dresses smartly, in clothing befitting a modern architect, the emphasis is on cut and line, not display.

Same with her home: an abstraction of unplastered lath, partly unfinished and partly a fantasy. She “won’t even buy a couch,” her husband complains.

Home, it turns out, is a fraught issue for Noura. A Christian Iraqi refugee, born in Mosul but now living in New York, she feels irreparably incomplete, hungering for wholeness. It’s that hunger — and Ms. Raffo’s bone-deep understanding of it — that’s radiant, superheating her every word and gesture.

This is hardly a surprise. Ms. Raffo, herself Iraqi-American, not only stars in the play but wrote it, and could thus customize the role to her considerable strengths as an actor. She’d done so before, in her 2004 breakthrough, “Nine Parts of Desire,” giving a bravura performance as nine Iraqi women.

Her Noura is so complex that she seems to encompass all nine. The resulting play is compelling and ambitious but also, under Joanna Settle’s direction, a bit blurry. With so much going on inside the title character, much of it contradictory, the audience may feel, along with her family, flummoxed by her whipsawing.

Indeed, when we meet her, Noura is torn between the joys of Christmastime and the horror of the recent fall of Mosul to ISIS. After eight years in the United States, she and her family have finally achieved citizenship and received their new passports — a cause for celebration except that she cannot tolerate the new names they’ve adopted. Her husband, Tareq, is now Tim; her tweenage son, Yazen, is now Alex. And just by simplifying a vowel, she is Nora.

The name is no accident. “Noura” is in part a response to “A Doll’s House,” the Ibsen classic in which Nora Helmer shocked the world by leaving her husband — and her children — in a flight of self-discovery. Still, this is no homage or sequel. Ms. Raffo isn’t as interested in the plot that led Nora to slam the famous door on Torvald as in what she lost in the process. No wonder Noura is obsessed with doors, both as an architect and a refugee: After allowing you exit they shut you out. 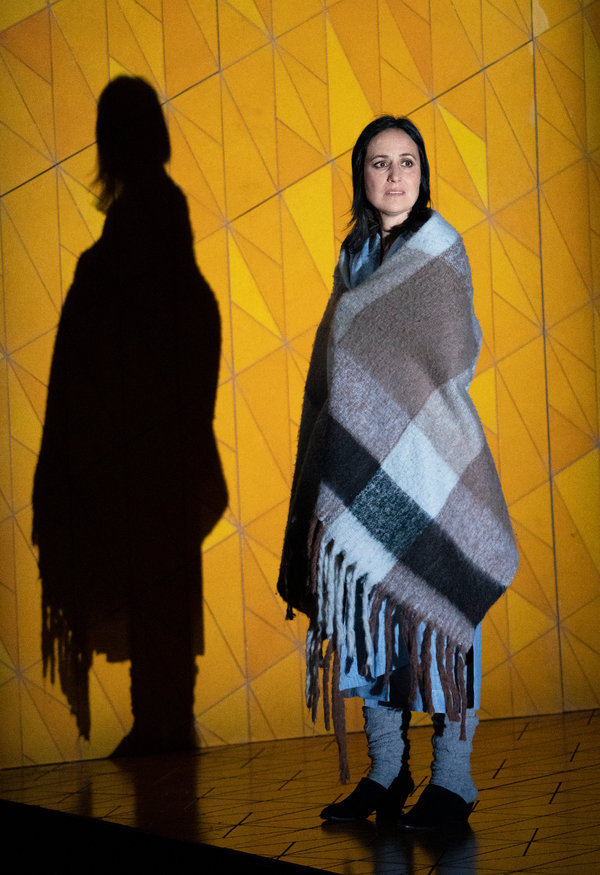 The loss of her homeland is never far from Noura’s mind as she and Tareq cook a traditional Mouslawi Christmas feast that features, among other delicacies, a dish the Americanized Alex calls “face.” (Yes, we get to see it.) The presence of their oldest friend, Rafa’a, a Muslim émigré who grew up with Noura, only adds to her fretting: How easily a cosmopolitan society comes apart when neighbors revert to tribes.

Dinner party plays, even those with exotic foods, usually require a stranger to stir up the action, and here “Noura” comes up with a doozy. She is Maryam, a younger Iraqi refugee, now a physics student at Stanford. She is also, notably, an orphan, whose flight from Iraq and resettlement in the United States Noura has helped to sponsor. When she arrives bearing gifts she also bears a big surprise. Let’s just say the name Maryam is no accident either.

The Christmas dinner itself, like many in real life, is a confusing affair. On one hand, it offers a corrective portrait of refugees as actual people instead of political boogeymen. This is a loving, productive family, adjusting well to snow and subways (both the transportation and the sandwich shop). Whether called Tareq or Tim, Noura’s husband is no Torvald; he has a modern disposition and seems comfortable catering to his wife. Alex, despite his jones for Minecraft, is not so Americanized as to sass his parents too harshly or renounce the pleasures of cuddling.

But in the manner of more conventional dramas, the dinner and its aftermath strip away what the rest of the play has built up, and for reasons that seem more expedient than characterological. Noura’s radiance becomes erratically pyrotechnic, setting off dozens of incendiary ideas but letting many of them fizzle. Ms. Settle’s production — she also directed “Nine Parts of Desire” — is likewise long on mood, short on clarity.

Yet many moments — as when Noura dresses Alex (Liam Campora) in her father’s kaffiyeh to play one of the Magi in their church’s Christmas pageant — are perfectly clear and stirringly powerful. Ms. Settle’s work with the cast is excellent. The triangular relationship of Noura, Tareq (Nabil Elouahabi), and Rafa’a (Matthew David) is deftly handled. As Maryam, Dahlia Azama counters Noura’s hungry radiance with a different kind: the radiance of self-sufficiency. It’s a form of withholding that she wants nothing from anyone.

But with surprises piling up in the final scenes, plot lines nurtured so carefully earlier are abandoned without comment — leaving me, at least, feeling a bit underfed.

I’m not sure Ms. Raffo would mind; she has said, of “Nine Parts of Desire,” that she wants “American audiences to walk out a little confused.” After all, how easily should they grasp “the psyche of people who have lived under Saddam for 30 years with American support, then had a war with Iran, resulting in 1.5 million deaths, followed by 13 years of sanctions and two wars under American firepower?”

It’s good that the best parts of “Noura” aren’t, in fact, easy. But a central performance as deep as Ms. Raffo’s can eventually become inaccessible. A door that appeared immeasurably open has somehow slammed shut.