A gentle snow is falling as a child sings a holiday song on a city street, her small metal crutch laid on the ground beside the plastic cup she’s brought for donations.

This is Tiny Timothia, and she’s trying to raise money for music lessons. But when her great-uncle, Scrooge, passes by and she tells him she’s busking, he begs to differ.

“You mean begging,” he growls, and gives her nothing.

In “A Christmas Carol in Harlem,” a new adaptation of the Dickens novella presented by the Classical Theater of Harlem and City College Center for the Arts, Scrooge is a contemporary tightwad of a deludedly selfish variety — the kind of guy who thinks he owes his material success to no one but himself, so would never dream of helping anyone out.

This is willed amnesia, of course; Scrooge (Anthony Vaughn Merchant), who makes his money in real estate, has forgotten how vulnerable he once was, and how much kindness meant to him then. In Dickens’s telling, the Ghost of Christmas Past calls the mission to redeem Scrooge a “reclamation,” because once upon a time, he was warm and decent. He’s just lost his way.

Truth be told, this brisk, 90-minute production — which the Classical Theater of Harlem hopes to nurture into an annual tradition — has yet to find its way. Directed by Steve H. Broadnax III at Aaron Davis Hall, it has a curiously unfestive air despite some lovely interspersed a cappella carols (the music director is Kahlil X Daniel) and dance (choreographed by Tiffany Rea-Fisher) that’s eye-catching from the opening scene, a balletic snow frolic. 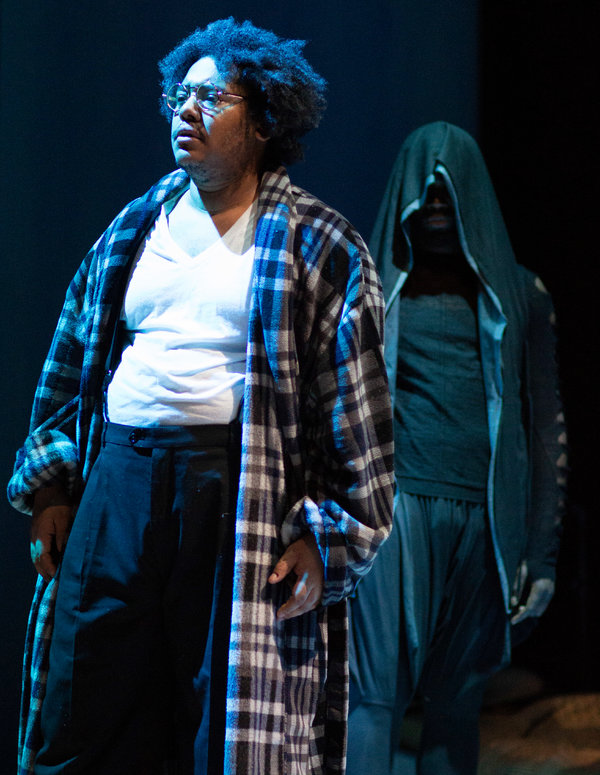 Part of the trouble is scenic: a plain set (by Izmir Ickbal) designed to accommodate plentiful projections (by Kate Ducey) that, in the cold electronic nature of the medium, feel at odds with a story that is so essentially about the human heart.

Shawn René Graham’s script is problematic, too, whittling away at both the depth and number of characters. One significant figure she adds is Sierra Jones (Alexandria Danielle King), a community organizer whose purpose seems almost purely didactic.

Tiny Timothia (Emery Jones) is an only child here, and the crowded Cratchit Christmas that Dickens made so joyous and instructive in love becomes a dour little affair. Mrs. Cratchit (Kenzie Ross) sounds like a health care ad as she lectures her husband, “You have a job and still can’t get necessary coverage, Bob.”

Because Ms. Graham has made Bob (Jeffrey Rashad) Scrooge’s nephew, there is no traditional nephew Fred, and without him we don’t get the fun of Fred’s party scene. Scrooge’s fondly remembered old boss, Fezz (Daniel Echevarria), does make an appearance, but too briefly for his emotional importance to register.

As for Scrooge, Mr. Merchant — a comic standout last summer in the Classical Theater of Harlem’s visually stunning “Antigone” — goes for laughs this time, too. His Scrooge doesn’t seem all that mean, but he never seems fully formed either. And if he’s merely a clown, how much can we care?