There aren’t many people left on earth who can speak to the spirit of Alvin Ailey — not in terms of his dances or the institution he created, but the man. Alvin Ailey American Dance Theater celebrates its 60th anniversary this season and along with that, the work of another choreographer who mercifully is on the earth right now: Ronald K. Brown. Through his dances, he speaks to the spirt of Ailey, and for nearly 20 years now he has enriched Ailey’s company with unaffected, soulful choreography that gives its dancers dimension and depth.

His latest, “The Call,” which had its debut at New York City Center on Tuesday, is Mr. Brown at his essence. His dances, earthy and subtly rapturous, tell stories of spirituality by weaving a tapestry of modern dance and West African forms. He can make a dance about love and not be corny; that sentiment is at the root of “The Call” — which he has described it as a love letter to Ailey, whose choreography he first encountered when he was 8. After seeing that performance, he made his first dance.

[Read about Mr. Brown and his relationship to Ailey]

Mixed in with Mr. Brown’s soft swaying twists of the arms and hips are details and shapes taken from the Ailey canon. In this way, “The Call” — Mr. Brown’s seventh piece for the Ailey company — is something of a conversation between the choreographers, a beauty of a dance that ripples along while highlighting Ailey’s formality, his ebullience and how he came to find his choreographic voice.

Opening with a meditative section of Bach’s Trio Sonata in G — Mr. Brown could set more dances to Bach, and I wouldn’t complain — the tone is measured and formal, but never stiff. Five dancers, some doing their own thing and others pairing up, curl across the stage in elegant patterns that reveal the music’s pulse. 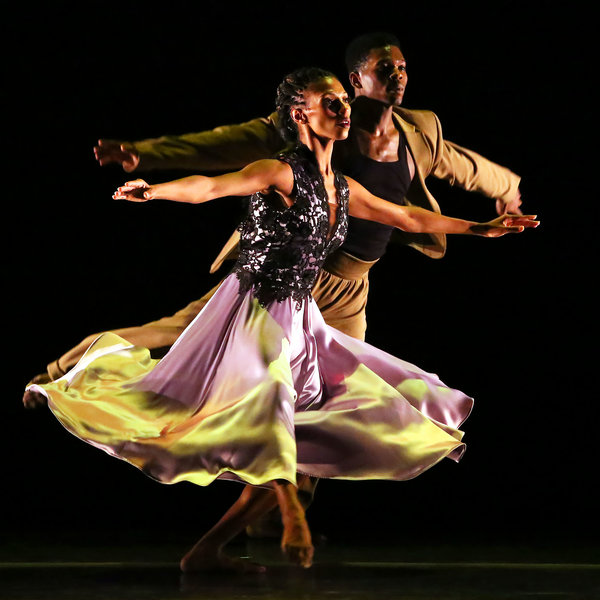 As the sound shifts from classical to the buoyant jazz of “Blues for Timme” by Mary Lou Williams — with whom Ailey collaborated on “Mary Lou’s Mass” in 1971 — the mood changes, too. The handsome pair of Jacqueline Green and Solomon Dumas (stepping in for an injured Jamar Roberts) slip inside the swinging piano music with fresh, youthful levity, evoking the close bond between Ailey and Carmen de Lavallade, the woman responsible for taking Ailey to a dance class in the first place.

The other dancers — Fana Tesfagiorgis, Danica Paulos and Daniel Harder — are more than supporting figures. With pliant knees and lifted chests, they fill out the spine of the dance as they come and go from the wings or take solo turns that extend Mr. Brown’s spiraling streams of movement. This dance is full of chain reactions: One moment leads to the next in a journey that lands the cast in a setting bathed in light, green and later yellow, featuring Malian music recorded by Asase Yaa Entertainment Group.

Aptly, this song is called “The Love,” and the section begins with Mr. Dumas, now shirtless, with his back to us and arms raised. As the stage brightens and the dancing locates a robust harmony, it’s as if we are witnessing Ailey the dance maker coming into his own. Captivating before, Mr. Dumas — a former member of Mr. Brown’s company, Evidence, he’s commanding and confident without having to push — is spellbinding now as he coaxes his torso and limbs into a seamless balance of sharp and soft. In flashes, he even looks like a young Ailey.

In the final pose — raised arms, which refer to the familiar wedge formation that also concludes the “Fix Me, Jesus” section of Ailey’s 1960 masterpiece “Revelations” — the dance comes full circle. Or does it signal the start of it all?

After “The Call” on Tuesday came two other works, Jawole Willa Jo Zollar’s “Shelter” a trenchant and, given the sight of many New York City streets and subway cars, timely exploration of homelessness; and Robert Battle’s frenetic “In/Side.” Like clockwork, the program ended with “Revelations” — as good as ever, but less urgent somehow. It held, for that night at least, Mr. Brown’s spirit, one of unwavering faith, in its reflection. “Revelations” may have been the source, but “The Call,” for all of its quiet intimacy, speaks to the future, and it would have been brave to let it stand alone.