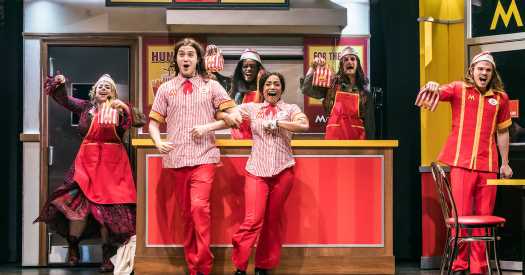 When classics get adapted or updated, I often find myself asking: What’s the added value? What do you get from Shakespeare with penguins that you don’t get better from Shakespeare straight up?

That’s the chip I had on my shoulder when I went to see “Scotland, PA,” a musical riff on “Macbeth” that opened on Wednesday at the Laura Pels Theater. It’s not as if the great tragedy hadn’t been plundered enough already; earlier “Macbeth” mash-ups include a “Macbett,” a “MacBird!” and even a “MacHomer,” in which Banquo is reconfigured as Ned Flanders.

And I already knew that this one, a world premiere commission from Roundabout Theater Company, was based on a 2001 film by William Morrissette that moves the action to the 1970s — not the most appealing era for updates. I worried the witches would be Charlie’s Angels.

But “Scotland, PA” — in which the witches, happily, are stoners instead — turns out to add some delicious value to both the original play and the film. Its smart book (by Michael Mitnick) and agreeable songs (by Adam Gwon) are often laugh-out-loud funny, something no one ever said about the version that opened in 1606. The show, directed by Lonny Price, is also quietly insightful, making piquant connections between Shakespeare’s drama of political powerlust and the consumerist mania of our own fast-food culture.

So I guess you could say the chip on my shoulder turned out to be a potato chip. After all, “Scotland, PA” takes place at a poky burger shack: a joint called Duncan’s in the title Pennsylvania town (a real place). There Joe McBeth, an affable slacker known to everyone as Mac (Ryan McCartan), is wading into his 30s content to work the Fry-O-Lator. He’s so laid back he doesn’t even mind that all his ideas for improving the business — revolutions like a drive-through window — are squashed by his brutal boss, Duncan (Jeb Brown).

But Mac’s wife, who also works at Duncan’s, does mind. In a fine “I Want” song called “What We’ve Got” — “not enough” — Pat McBeth (Taylor Iman Jones) lets her frustrated ambitions for a better life spill out. “You want one more night eatin’ from cans?” she sings. “You could be someone makin’ great big plans.” Soon, in “Everybody’s Hungry,” Mac catches her spark: “Time to get in on the chase/Shoutin’ to the cosmos/Like I own the whole damn place.”

Still, Mac’s ascent starts almost accidentally, when he and Pat deliver Duncan to a fittingly fast-food fate during an attempted robbery. The carefully calibrated tone of the musical — modeled no doubt on the comic-creepy balancing act of “Little Shop of Horrors” and “Sweeney Todd” — allows this material to work as comedy, even if it involves a murder. It helps that Mac, unlike Macbeth, is a dopey underdog and that his nemesis is such a sadist. But it also helps that Gwon’s songs give everybody a classic-rock heart.

Set up this way, the story pulls us along even when the steps to burger supremacy involve treading on innocents. One, a homeless man (David Rossmer), gets framed for Duncan’s murder. So does Duncan’s son Malcolm (Will Meyers), a high school student who’d rather play football (for secret reasons) than inherit the kingdom. Next, a dim but sweet co-worker of the McBeths called Banko — real name Anthony Banconi — is bamboozled into providing them an alibi. This occasions a terrific number called “Kick-Ass Party,” which Jay Armstrong Johnson sells in full surfer-dude mode.

If you are trying to trace the parallels to “Macbeth,” you are probably in a tangle by now. That’s just as well; Mitnick’s unusually tight book has the confidence not to be overly faithful to the play or even the movie. Though his Malcolm tracks nicely with the one in “Macbeth,” Banko doesn’t really line up with Banquo. Peg McDuff, the detective who arrives at the end of the first act, is only tangentially related to Shakespeare’s Macduff — and unlike the movie’s detective, played by Christopher Walken, is a woman: that reliable old pro Megan Lawrence.

That McDuff is also a vegetarian helps keep the story focused on the burger business as a case study in metastatic ambition. (There’s a reason so many of the characters’ last names begin with Mc instead of Mac.) What begins for Pat as a simple case of monetary reparations (“Not payback but back pay,” she says) winds up a quest for commercial domination. At the end, in a nifty plot twist I won’t spoil, the spooky stoners’ augury that McBeth will prevail unless “the peaks of mountains drip with blood” — no Birnam Wood here — comes hilariously, gruesomely and relevantly true.

Small, clever musicals are fragile things, though, and I don’t want to oversell this one in praising it. “Scotland, PA” still needs to cure a few structural hiccups (the first act seems to end twice) and to address its longueurs and lapses of logic. One of those arises from what are otherwise improvements: Now that the McBeths’ hatred of Duncan is so rationally motivated — we even learn that he beats his wife — the leap from hatred to murder is not.

That’s probably fixable with a few deft lines. But the show’s slight case of ambient mildness may be a harder problem to solve, especially in the songs. The deliberately warmed-over ’70s pastiche of Gwon’s music, and notably of its matching lyrics, too often favors authenticity at the expense of theatricality. Ambition is a dish best served hot.

Yet this is also a show that under Price’s clean direction gets so much right. For one thing, unlike its characters, it understands its own ambition, avoiding overplaying and over-amplification. It is admirably well sung and acted by the spirited cast, especially the smoky-voiced Jones as Pat and Alysha Umphress as the stoner who spouts both prophecy and melisma. It moves without undue fuss on Anna Louizos’s simple revolving set.

And it makes its points with a similar modesty. That’s more than you can say for Shakespeare, with his annoying psychological profundity and show-off verbal panache. He may have presciently endorsed the musical’s theme 400 years ago when he had Malcolm worry that “my more-having would be as a sauce to make me hunger more,” but “Scotland, PA” is something even he never predicted: a kick-ass party.

Jesse Green is the co-chief theater critic. Before joining The Times in 2017, he was the theater critic for New York magazine and a contributing editor. He is the author of a novel, “O Beautiful,” and a memoir, “The Velveteen Father.” @JesseKGreen • Facebook