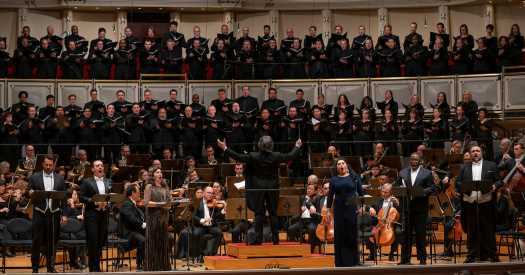 CHICAGO — While Verdi’s “Aida” ends with a delicate duet for its lovers, who have been sealed alive together in a tomb, they don’t have the opera’s final word. That goes to the princess Amneris, who begs softly for peace, and a chorus of priests and priestesses.

What are they saying in the somber closing bars? I bet you’ve never heard the words. At most performances of “Aida,” the chorus intones on a vague, barely audible “ah.”

But with Riccardo Muti, our most scrupulous modern Verdian, leading the Chicago Symphony Orchestra and Chorus in a concert performance of the opera on Friday evening, the sound was barely a gauze, and yet the rhythm was exact, each phoneme crystal clear and relished: “Immenso Fthà,” a prayer.

The moment took on new mystery and wonder, and the import of the opera’s conclusion — a timeless religious sphere quietly swallows up the transient concerns of governments and romances — was suddenly fresh.

There were passages like this, as if hearing the opera with new ears, throughout Mr. Muti’s “Aida”: pinprick violin arpeggios evoking the flow of the Nile in the opening of the third act; tiny grace notes that add ineffable spirit to the short second-act ballet in Amneris’s chambers.

At the beginning of this Triumphal Scene, a dotted rhythm, properly crisp, conjured the light step of horses. And as Amneris pledged revenge against the man who won’t love her, a passing trill in the trumpets — usually buried in the orchestral textures — was a memorably angry flare. 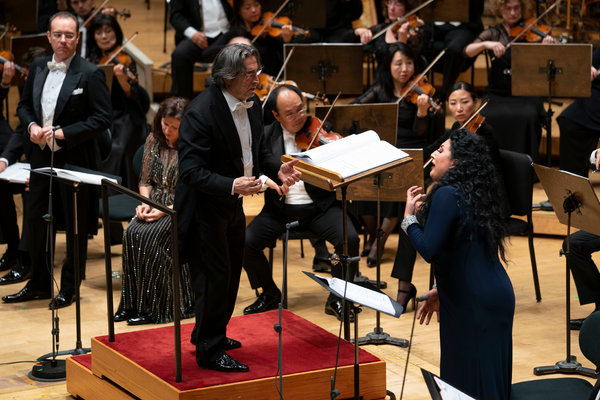 It’s unsurprising that the performance was full of little revelations like these. Mr. Muti made his career in Italian opera, and this is the fourth Verdi work he has done in his decade-long tenure in Chicago, after a harrowing “Otello” (2011), a darkly surging “Macbeth” (2013) and a stylishly witty “Falstaff” (2016). “Aida” would have been the most crushing artistic loss had the orchestra musicians’ strike not been resolved, after nearly seven weeks, at the end of April.

Mr. Muti’s position is that Verdi has been abused by modern musicians. His rhythms have been fudged; his operas have become occasions for vulgar high-note battles rather than displays of refinement, subtle vocalism and meticulous wedding of text and music. Mozart and Wagner, Mr. Muti argues, would never be subjected to the disrespect — the cuts, the smudgings — still commonplace in Verdi performance.

He’s not wrong; Teutonic condescension to southern European culture has long loomed large. For his part, Mr. Muti has responded with Verdi interpretations that are pledges of allegiance to each marking in the music, each 16th rest (never to be confused with an eighth rest, so help him God).

The performance on Friday sometimes had the feel of a time capsule being prepared. In a hundred years, this “Aida” could be opened and you could recreate the score, note by note, as if taking dictation from Verdi himself.

As an orchestral showcase, it was always impressive — the tempos judicious; the sound unfailingly balanced; the winds, in particular, beautifully blended. Mr. Muti has appointed three players in the past few years whose interplay was a model of sensitivity: Stefan Ragnar Hoskuldsson, principal flute of the Met Orchestra before coming to Chicago; Keith Buncke, principal bassoon; and William Welter, new this season as principal oboe, and remarkably full and liquid in tone and line.

The playing of this “Aida” was in many ways exemplary. And yet, like Mr. Muti’s performance of the opera at the Salzburg Festival two years ago — with the Vienna Philharmonic an even more extravagantly virtuosic and sensual partner — it was often cool to the touch. It was a practically flawless reading of the score, but it was never moving. The drama barely crackled. Even the most forceful moments felt rounded off, smoothed out, ultimately muted.

I found myself, as I never have before, wanting more heft from the brass players, notorious for playing too loud but often superbly elegant on Friday. I wish that at the end of the Judgment Scene, when their howls mark the opera’s climax, Mr. Muti had really unleashed them. Controlled wildness isn’t the same as vulgarity.

That’s one lesson about opera that should be remembered. Another is that intelligence and respect for the score are integral, but only get you so far. Without vocal richness and power, “Aida” means little; the work’s structure must of course be correct, but great singing fills it with life.

So it is no coincidence that this “Aida,” the least thrilling of the four Verdi operas Mr. Muti has conducted here, features the spottiest cast of the four.

The soprano Krassimira Stoyanova, her voice pale and fragile on Friday, has long collaborated with Mr. Muti. (She was a wrenching Desdemona in his “Otello” here.) But the question of whether she was ill, or the bloom is more permanently out of her voice, is less important than the reminder she offered that vocal glamour and power are not incidental to the details of articulation.

Those details were observed fastidiously by everyone onstage, including the bass Ildar Abdrazakov (as the chief priest Ramfis), the bass-baritone Eric Owens (the King) and the baritone Kiril Manolov (Amonasro). But there was not real vocal richness or personality among that trio of deep male voices; they struggled to match the orchestra for color and resonance. There was, moreover, a chilled feeling, as if everyone were so intent on executing Mr. Muti’s exacting vision to the split second that spontaneity had been banned.

It was only in the fourth-act duet between the tenor Francesco Meli, an ardent, sweet-voiced Radamès, and the mezzo-soprano Anita Rachvelishvili, a moody Amneris, that attentiveness to detail met tonal security and allure. The result was, finally, the kind of emotion that should be pervasive in “Aida” — the reason, after nearly 150 years, we keep on wanting to hear it.

The program repeats on Tuesday at Symphony Center, Chicago; cso.org.

Zachary Woolfe has been the classical music editor since 2015. He was previously the opera critic of the New York Observer. @zwoolfe