When the choreographer Reggie Wilson curated “Dancing Platform, Praying Grounds: Blackness, Churches and Downtown Dance,” a series of performances, talks and walking tours at Danspace Project last year, he wove together three rich threads into a tapestry full of history and heart. The aftereffect of that platform still echoes at Danspace, which also, of course, happens to be a church — St. Mark’s.

This week, the work he choreographed in honor of the platform, “… they stood shaking while others began to shout,” returned to Danspace Project as part of American Realness 2019. (The Gibney dance organization is a co-presenter.) Inspired by black Shakers, mainly the religious activist Mother Rebecca Cox Jackson, Mr. Wilson explores the intersection of worship and dance with poetic imagination. Within the frame of postmodern dance — and with a heady mix of spirituals, contemporary music and field recordings — he produces a remarkable work that flows seamlessly from start to finish.

Each program starts with a performance lecture. There are three possibilities for any given night; the one on Monday, opening night, lasted slightly longer than the dance and covered ring shout, African dance and postmodern dance. Mr. Wilson discussed the rhythmic ritual that moves in a counterclockwise circle with shuffling feet and also screened video excerpts from different styles of African dance and contemporary pieces to show, among other things, how cultural appropriation works.

As a speaker, Mr. Wilson isn’t dry and neither was his lecture, which included a call and response with the willing audience and an impromptu ring shout performed by volunteers. Both the talk and “… they stood shaking” could have existed on their own, but together they achieved something deeper: They moved the spirit into the space. 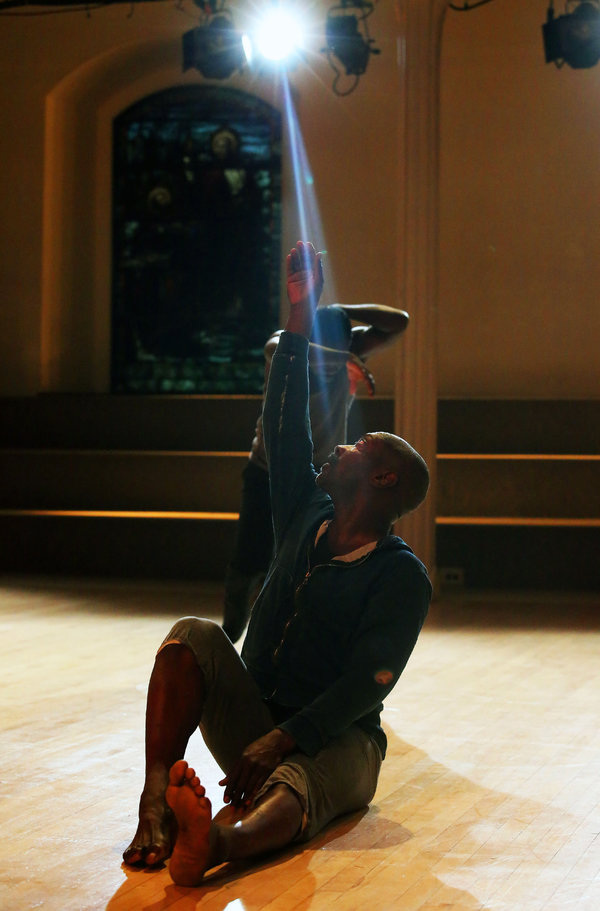 “… they stood shaking” begins with a processional led by Mr. Wilson, who covers the horizontal width of the stage to the altar; in once instance, he lugs a suitcase full of, we discover, clothing. Each dancer moves across the floor, dressed in sandy-toned African prints — the costume’s construction is by Adrienne McDonald with additional styling by Enver Charkartash. Once the dancers arrive on the altar, they change into ordinary street clothes, a staple of postmodern dance.

Scooting forward on their rears with their legs stretched before them, they punch and grab at the air until Rhetta Aleong, a veteran member of Mr. Wilson’s Fist & Heel Performance Group, pulls them up. She’s all business but also tender; it’s as if she’s plucking them, one by one, out of water.

The dancers, to Gladys Knight & the Pips’ soulful rendition of “The Way We Were,” enact gestural choreography that becomes ritualistic as they spread out and echo one another in a canon structure to create a lulling sense of reverberation. There is a hypnotic ring shout, too, as the cast moves in concentric circles until converging in the center with raised arms and repeating the pattern again. It feels as much a movement purification as a prayer.

After the dancers break from the ring, they move more explosively before gradually splintering off to leave the stage for the balcony above. By the time Yeman Brown — a captivating performer with meticulous detail and abandon — leaves the stage, the others are all in the balcony repeating the ring shout with an exalted air to Grace Jones’s version of “Ring of Fire.”

The balcony, it is important to note, was once a slave gallery and from that memory and this specific space, Mr. Wilson paints a spellbinding sight: Under unforgiving lights that expose peeling paint, a diverse, multigenerational cast reclaims a space with a dance. It’s magnificent.

“… they stood shaking while others began to shout”
Through Saturday at Danspace Project, Manhattan; danspaceproject.org.