It’s been a year like no other, filled with tragedy and confusion, resilience and hope. It may feel like now is the time to dance, but it’s still not the time to dance the pain away. In “Afterwardsness,” a new presentation by the Bill T. Jones/Arnie Zane Company, the point isn’t to celebrate what the future holds, but to stay put, just for a second, in the moment.

Created by Bill T. Jones and Janet Wong in collaboration with members of the company, “Afterwardsness” is named after Freud’s idea of the belated understanding of trauma. But what it explores, in part, are Jones’s in-the-moment feelings regarding what he sees as twin pandemics: the coronavirus and the unrelenting violence against Black bodies.

Performed on Wednesday at the Drill Hall at the Park Avenue Armory, which commissioned the work, “Afterwardsness” illuminates the swirling emotions and struggles of the last year. Even in more fiery passages, there is a sense of isolation and exhaustion as weary and brave bodies dart in and out of vacant spaces and pathways, delineated by blue and yellow tape on a 55,000-square-foot stage. The world of “Afterwardsness” isn’t exactly entertaining; certain moments can really crawl. And yet it feels genuine, and beyond that, resolute in its unwillingness to paint the wrong snapshot of a time. 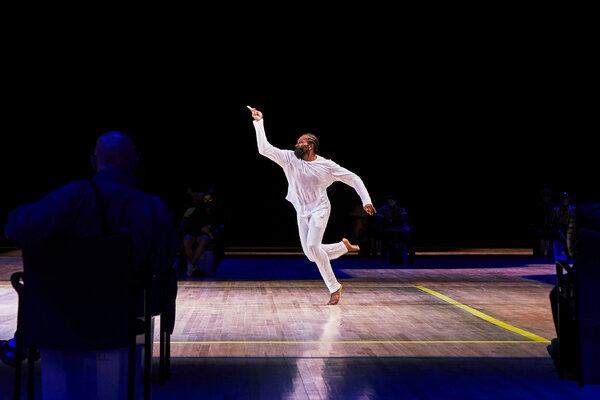 We entered the space in small groups. In what still seems rare, an in-person performance, the audience’s choreography is just as involved as that of the dancers. (The production was originally scheduled to be performed in March, but was postponed after several members of the company tested positive for the coronavirus.) As people started filing in, it was as if a task-based dance — a postmodern call to action — had begun. Walk in a straight line. Sit down at your appointed chair. Place your belongings in the plastic bin underneath your seat. Find stillness.

The dancers, nine in all, weren’t so contained in their entrance: Running across the space, they banged on pots to create a cacophony of motion and sound. From the start, a voice-over periodically listed dates — March 13, March 15 and so on — up to May 19, the night we had gathered. But this diaristic approach interrupted the flow and distracted from watching the dancers navigate space and time to music by artists including Olivier Messiaen, Holland Andrews — what a creamy voice they have — and Pauline Kim Harris. In its best moments, “Afterwardsness” was fully alive.

As the clarinetist Paul Wonjin Cho played in an elevated chair — it looked a little like a lifeguard tower — bordering the stage, the dancers took their places, some close in a large middle square, others in the distance, creating a domino echo of shapes. Even in proximity, no one touched. The choreography, culled from material the dancers had learned from archival videos of work no longer in the repertory, was an array of short movement phrases full of leaps and runs, twisting torsos and crisply held arms. It could get repetitive. I wanted the lighting, by Brian H. Scott, to be more intuitive and less intrusive; at times, it felt like it was being operated with a dimmer switch.

Yet even as the dancing appeared and disappeared like fragments, its starts and stops mirrored the energy of a strange and sad year. Wasn’t this what the days have been like, one banging cluelessly into the next? Waiting for a vaccination, waiting for justice. Hoping.

The music, perhaps more than the dancing, gave the work its dramatic arc. About halfway through, the dancer Vinson Fraley Jr., dressed in white and seemingly a guiding force, sang “Another Man Done Gone.” Afterward, Harris, also the production’s music director, quietly entered the large center space and played a violin solo, “Homage,” in honor of George Floyd, whose death, last May, generated protests worldwide.

As she performed her composition — a long and lonely lament in which her strings could feel like lungs gasping for air — she rotated, so gradually that it was almost imperceptible.

For the dancers, there were solos or at least featured moments: Huiwang Zhang was astonishing — slippery and resilient as he wound and rolled his way along a single pathway of light. Nayaa Opong, in motion or not, simmered with a kind of otherworldly splendor, as did Chanel Howard, slicing her hips through the space. But it was really the bond of the ensemble, also including Barrington Hinds, Dean Husted, Shane Larson, S. Lumbert and Marie Lloyd Paspe, that gave the dancing its power.

Aside from Fraley, they appeared in unpretentious practice clothes, everyday outfits, perhaps making reference to what must have been an arduous pandemic project: Putting together a dance on Zoom. In moments, they were shaky and out of sync, yet what they created was unexpected and vulnerable, more illuminating than a display of perfect form: A group synergy born from social distancing.

In the end, as they took their bows, the dancers, masked the whole time, locked eyes with as many audience members as they could find. Somehow, it wasn’t corny. In this acknowledgment — look what we’ve been through, look at what we did together — “Afterwardsness” became more than a show that you hoped would feel timeless. Really, only these dancers could dance it in this moment. What does it capture? The spirit of time.