The weather is a misery, the subways are a disaster, the news is unspeakable. But inside a tent tucked into a rear corner of Lincoln Center Plaza, a poodle is tooling around in a miniature sports car, his sequined scarf fluttering. Which is to say that the Big Apple Circus is in town and a little more joy is loosed upon the city.

This year’s show, again written and directed by Mark Lonergan, is high flying, but also more low key. The marquee acts are fewer and gone is Barry Lubin, a beloved clown I’d always found hinky and unfunny, fired from the circus for sexual misconduct. He’s been replaced by Adam Kuchler, a nifty juggler dressed like a Jazz Age swell. Mr. Kuchler has a sidekick, Mark Gindick, disguised a phone-glued weekend dad who wanders into the ring by mistake. Together they groove to the cheerful live music. (The choreography is by Grady McLeod Bowman.) 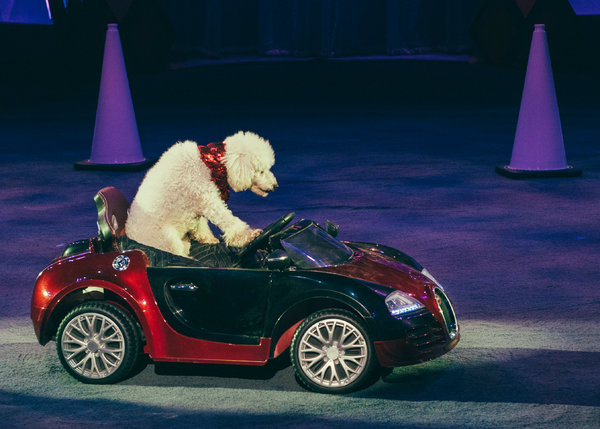 Also new: the ringmaster Stephanie Monseu, sparkly, but underused. Couldn’t she eat just a bit of fire? Only her lace-up bustier cues her origins in the adult Bindlestiff Family Cirkus.

The show kicks off with Emil Faltyny balancing on the free-standing ladder, an act that requires astounding discipline, but isn’t much to look at, until he adds a soccer ball, improvising a lulu of a penalty kick. By contrast, Victor Moiseev’s horizontal juggling is visually ravishing — balls shaped like giant cranberries besiege him on all sides — but unastounding. “It looks like he’s doing magic, but really he’s not,” my 5-year-old, cotton-candy-drunk date said sagely.

Valeriy Sychev and Ekaterina Abakarova perform a steamy aerial straps act, a soaring sex ballet in which Mr. Sychev enfolds Ms. Stepanova and lifts her toward acrophilic bliss before grounding and then ghosting her. It included some dazzling holds, as when Ms. Stepanova keeps herself aloft through thigh strength alone.

A rousingly egalitarian doubles act comes courtesy of Virginia Tuells and Ihosvanys Perez, a married couple who perform as Duo Fusion. Do they know this also the name of an antacid? Their acrobatic balance begins typically, but after a few moves, Virginia takes a turn as the anchor, supporting Ihosvanys. She bends into a bridge and he does a handstand atop her abdomen (is that the antacid tie-in?) and good lord is it wonderful. I kept nudging the 5-year-old in a see-girls-really-can-do-it-all way; she never imagined they couldn’t and took the wonders in stride.

An act called Spicy Circus bounds atop twinned trampolines, and I took no notes as the Flying Tunizianis flung themselves toward their trapezes because it turns out I can’t write while I’m gaping. This year’s routine involved two catchers and, during the finale, a spangled foursome seems to square dance midair. The Flying Tunizianis perform with a safety net, which may nettle some thrill seekers, but I’ve always found the alternative too stressful.

For absolute gladness, there is no topping Jenny Vidbel’s animal acts. The use of animals in circuses is controversial, but Ms. Vidbel, who works only with domestic animals, lives with them year-round and continues to care for them in their retirement, makes it seem a friendly and virtuous thing. (Her costumes all have treats pockets.) The stallions are grand; the miniature horses cuddly; the potbellied pig deserves a string of kiss-blowing emojis the width of this page. To see her dogs catch flying discs — which yes, most dogs do, but these dogs do it better and in time with the band — is to be on barking terms with delight. “You have to write down that this part is good,” my date demanded.

These may sound like damning words, but — with the bustier and aerial straps maybe excepted — the Big Apple Circus is wholesome family entertainment. It is good-hearted and pleasure-minded. The acts don’t overstay their welcome (honestly, that pig could have stayed forever) and the cast is robustly international. In the finale, everyone returns to the ring, shimmying together like a spangled, more flexible United Nations.

I left happy and even though she’s a tough customer and I’d confiscated her cotton candy, my date did, too. The circus ran away with us.