As important as they can be to a hip-hop act, hype men are supporting characters: They are there to valorize the M.C. and are meant to stay in their lane. A few, like Jay-Z, went on to fame but mostly nobody ever thought Flavor Flav had more to say than Chuck D in Public Enemy.

What happens when one of these sidekicks steps forward sets in motion the plot of “Hype Man: a break beat play,” Idris Goodwin’s likable but overstuffed new show at the Flea Theater in Manhattan.

For years, Verb (Shakur Tolliver) and his best friend, Pinnacle (Matt Stango), have had an arrangement: Pinnacle rhymes, and Verb gets the crowd going. This works for both of them, but left unsaid is that the presence of Verb, who is black, legitimizes Pinnacle, who is white. In the middle is their beatmaker, Peep One (Tay Bass), a woman of mixed race — in this show, you don’t have to squint too hard to read messages.

Just as they are about to hit the big time with an appearance on “The Tonight Show,” Verb is shaken by an instance of police brutality, in which a black teenager is shot 18 times. Usually a party-happy guy, he wants to take a stand on national television. 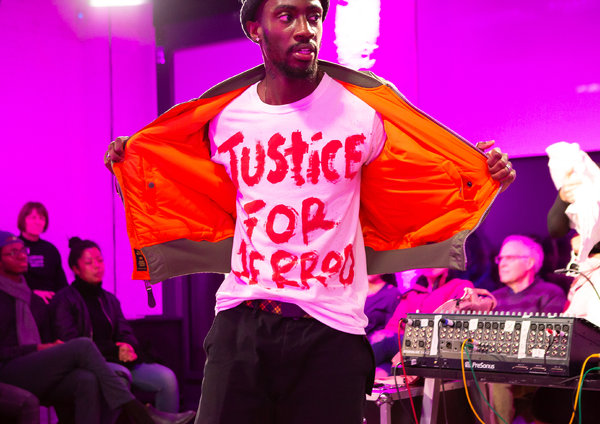 Peep One and Pinnacle are less than thrilled. “This is our introduction to a lot of new people,” she says. “Probably shouldn’t come out the gates making political statements.”

Verb pays them no heed, and his action upsets the professional and personal relationships that bind the trio.

Mr. Goodwin (“This Is Modern Art”) packs in a lot of ideas and not enough connective tissue, leading to abrupt transitions and a rushed feeling. Peep One feels especially underwritten as she explains her desire to be a role model for aspiring female hip-hop producers and tries to placate the two men. Mostly she feels like a bystander in the central conflict.

The show is more interested in race than in gender anyway. Pinnacle grandstands about growing up in a rough neighborhood, but he is oblivious to the built-in advantages his race has given him, and does not show much empathy for his friend’s politicization. “I don’t have a viewpoint on it,” Pinnacle says of the killing. “Verb got a viewpoint. He should write it. Oh that’s right — he can’t!”

Unfortunately, Mr. Goodwin does not fully explore the complicated relationship between a hype man and an M.C., especially when they’re of different colors. Pinnacle had started marginalizing Verb on creative grounds even before the “Tonight Show” caper; on a larger scale, American entertainment has a long history of sticking people of color in supporting roles designed mainly to make a white star shine brighter. The parallels do not appear to have occurred to Pinnacle.

The production, staged by Kristan Seemel and the Flea’s artistic director, Niegel Smith, zips along, at least. Mr. Stango gives Pinnacle an appropriately weaselly mien, and Mr. Tolliver has a confident swagger that is effective when Verb is goofing off as much as when he’s raging. And when the trio gets cranking on musical numbers — Mr. Goodwin is also an M.C. with several releases under his belt, while Wendell Hanes composed the earworms — you won’t need a hype man’s injunctions to put your hands up in the air.