In 2012, Hank Willis Thomas saw a poster of Norman Rockwell’s painting of a family seated around a holiday table, the matriarch presenting a turkey to her guests. For Mr. Thomas, a 42-year-old black artist raised in Manhattan, the pale complexions in Mr. Rockwell’s 1943 masterpiece did little to represent his experience of a diverse America. So he decided to create a tableau of his own.

Mr. Thomas and the photographer Emily Shur rented a home in Los Angeles for a weekend in May. There, they shot several images that harked back to Mr. Rockwell’s “Freedom from Want,” one in a series of four paintings inspired by Franklin D. Roosevelt’s 1941 speech to Congress celebrating America’s freedom and democratic values.

“The image haunted me because of the world we live in,” the artist said, referring to today’s divisive political climate. “I wanted to imagine what it would look like today.” 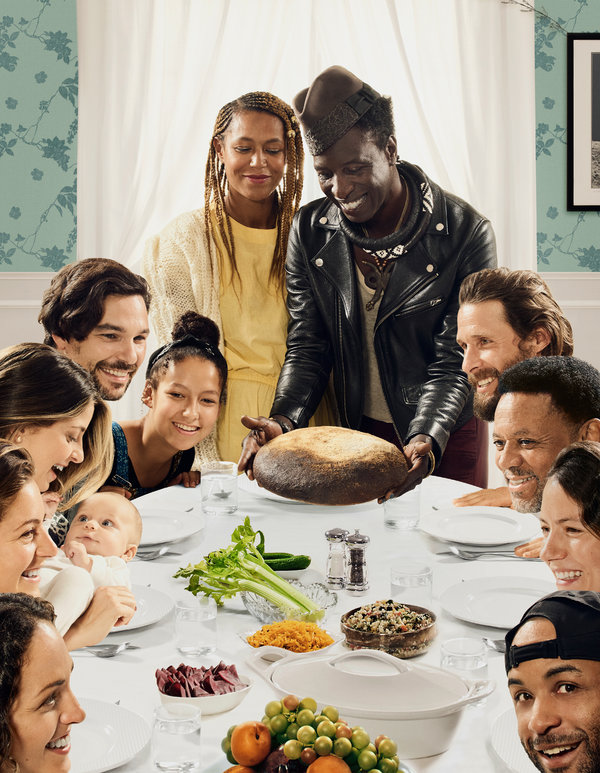 Rockwell, who died 40 years ago on Nov. 8, is among America’s most influential illustrators. And he is experiencing a resurgence this year. The “Four Freedoms” series is touring the United States in celebration of its 75th anniversary. And The Saturday Evening Post, the literary magazine that published Mr. Rockwell’s series and many of his other illustrations, recently announced it was putting its archives online.

But it is the interpretation of the artist’s classic images, perhaps, that has given Mr. Rockwell’s work renewed life. Mr. Thomas is one of a number of artists who have reimagined “Four Freedoms,” most of them spurred by racial and political tension that has divided the country.

Among those is Maurice “Pops” Peterson, an artist from Hillsdale, Mass., about 20 miles from Stockbridge, where the Norman Rockwell Museum is situated and where Mr. Rockwell had a studio in his later years. Mr. Peterson, 66, was unnerved by the 2014 fatal shooting of Michael Brown by a police officer in Ferguson, Mo.

“We do not all have freedom from fear,” he said in an interview.

Mr. Peterson used his iPhone in 2015 to create “Freedom From What?,” a photographic compilation he made based on Mr. Rockwell’s “Freedom From Fear.” In Mr. Peterson’s interpretation, a black man holds a newspaper with the words “I Can’t Breathe,” a reference to Eric Garner, the unarmed black man from Staten Island who died in 2014 after he was placed in a chokehold by police.

“It was then my art became personal,” Mr. Peterson said.

Mr. Rockwell’s portraits of Americana in the 1940s and 1950s were quite popular, but largely limited to white, Anglo-Saxon subjects who were friends or acquaintances of the artist. His “Four Freedoms” series helped boost patriotism in a country on the brink of war, a visual reminder of American ideals. During World War II, they were turned into posters to muster sales of U.S. war bonds.

Laurie Norton Moffatt, director of the Norman Rockwell Museum, said, “Rockwell worked for hire and had to address the norms” of The Saturday Evening Post. Later, in the 1960s, the artist joined Look magazine and depicted civil rights and poverty. “We saw him progressively move toward more representation,” she said. “But it was an evolution.”

Ms. Moffatt said the museum embraces the work of Mr. Peterson — he has given lectures there — and others because it wants to connect the ideals in Rockwell’s paintings to current culture. But it also blunts criticism that Rockwell’s work is solely for a white audience. “It is a new way of stimulating the public and bringing him to a young audience,” Mr. Peterson said.

As part of the “Four Freedoms” tour, the organizers are showing works by contemporary artists inspired by the artist.

Mr. Thomas, a founder of For Freedoms, which produces exhibitions, public art and a billboard campaign to spur civic activism, said he first approached Ms. Shur about creating the photographic series in 2017. But even so, finding a cast of diverse subjects was fraught. “What does a Muslim look like?” Mr. Thomas asked. “What does a Jew look like? We were worried about tokenism.”

The project came together in early 2018. Well, sort of. Mr. Thomas and Ms. Shur planned to shoot the tableaus at the “Into Action” festival in downtown Los Angeles in January. But the morning of the shoot, they lost their space. “The logistics were crazy,” Ms. Shur said. “He has the ideas and I have to execute.” They were prepared to drop the project altogether, but within hours Mr. Thomas found an empty studio across the street.

That weekend a parade of people streamed through the front doors to be photographed for recreations of Mr. Rockwell’s “Freedom of Speech” and “Freedom of Worship.” The actress Rosario Dawson showed up. So, too, did the rapper Chuck D, a founder of Public Enemy. Mr. Thomas said Gina Belafonte, the daughter of the actor and activist Harry Belafonte, came with a group of ecumenical leaders. Even Dolores Huerta, a co-founder of the United Farm Workers with activist Cesar Chavez, stopped by. By the end of the weekend, more than 150 people had been photographed, Mr. Thomas said. They became the underpinnings for the final photographic compilations.

“All of these people have their own communities,” he said of those photographed. “Everyone wants to be a good person. The demonizing of people doesn’t help.”

That’s what led Maggie Meiners, an artist from suburban Chicago, to create a series of her own. In 2008, she visited the Norman Rockwell Museum with her husband and was struck by the elderly couple at the head of the table in “Freedom From Want.” That year, Californians had voted to overturn an earlier decision of the California Supreme Court to legalize same-sex marriage.

“Why should the courts get to decide what constitutes a family?” she said.

The ban on gay marriage was later deemed unconstitutional. And in 2015, Ms. Meiners, 46, recreated the photograph with two married, gay friends serving their guests.

Ms. Meiners, like Rockwell, photographs people she knows. In 2017, soon after the inauguration of President Trump, she said, an American-born Muslim man came to speak at her Christian church. At the time, Mr. Trump was using anti-Muslim rhetoric to whip up support for his ban on immigration from mostly Muslim countries. Ms. Meiners was moved by the speaker’s story.

“I don’t know a lot of Muslims, and that was disconcerting,” she said.

So, she asked him out for coffee. “I said, ‘I feel that the group most targeted is Muslims,’” she said. “I said, ‘I don’t know any Muslims. I really want people to know who you are.’ We had a good conversation.” She asked him if he and a group of his friends would be willing to pose for one of her photographs. “He said, ‘Tell me where to meet and I will bring the people,’” she said.

One of the women brought a hijab patterned after the American flag. Ms. Meiners said she continued to be in touch with the man.

“I want to expand dialogue,” she said. “The value of art is it can connect people on all levels.”