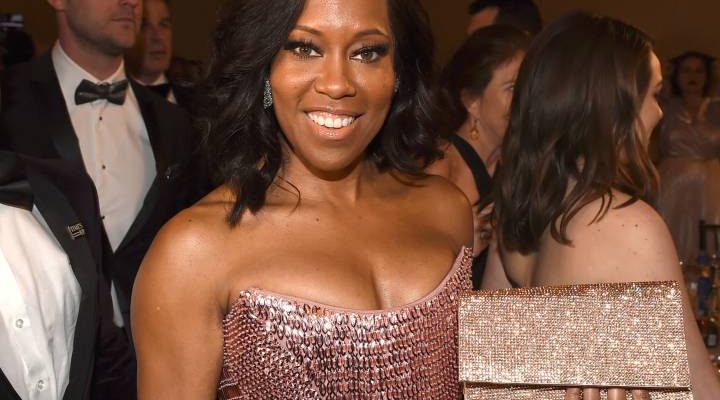 Regina King won the Golden Globe for best supporting film actress for her role in If Beale Street Could Talk and took the opportunity to use “her platform” to challenge Hollywood.

King gave a heartfelt speech on Sunday night while accepting the award, including calling out Amy Adams and thanking her for her prayers.

“Amy, thank you for the prayers, sweetheart,” King said to her fellow nominee.

She added that it’s the first movie her son “could see himself in…. Thank you, God, for letting me be a witness.”

King got political as they tried to play her off stage, but the music stopped.

“So often, everyone out there, they hear us on the red carpet, and they say us celebrities, we’re using the time to talk about ourselves when we’re on the soapbox and using a moment to talk about the systemic things that are going on in life,” King said.

She continued: “Time’s Up X2. The reason why we do this is that we understand that our microphones are big and we are speaking for everyone.”

She also vowed that in the next two years, any film she produces will have 50 per cent female casting. She also challenged the industry to join her and show solidarity.

“I want to use my platform to say that in the next two years, everything I produce, and it’s going to be tough, is going to be 50 per cent women,” she declared.

“And I challenge everyone out there who is in a position of power, in all industries, I challenge you to challenge yourself and stand with us in solidarity and do the same,” King said.

It’s the first Golden Globe for King in three nominations. She was also nominated for the TV series American Crime in 2016, and was nominated this year for the series Seven Seconds.

Many people on Twitter applauded King for using her speech to offer the challenge to Hollywood.

In Barry Jenkins’ adaptation of the James Baldwin 1970s novel, In If Beale Street Could Talk, King played Sharon Rivers, the mother of the main character.

It is set in Harlem and follows Tish, who gets pregnant and prepares to marry her boyfriend Fonny, who is later falsely accused of crime.