Fans of Reese Witherspoon have been waiting with bated breath for well over a decade for the Oscar Winning actress to make her return as Elle Woods in the next chapter of the Legally Blonde story. The character that truly made Witherspoon a household name debuted in 2001 and fans fell in love with the pink-suit-wearing young woman in law school. She proved that one never needs to sacrifice any part of their personality to be taken seriously, or to become a credible lawyer, and she did it all with flair.

Since the 2003 sequel, Legally Blonde 2: Red, White & Blonde, fans have been itching to see where Elle Woods would go next. It was reported in June 2018 that the third film would absolutely be happening with Witherspoon making the announcement in perfect Elle Woods fashion. Already, Witherspoon’s former costar Luke Wilson has demonstrated interest in the project. Just this past February, the actor explained that he would love to reprise his role of Emmett Richmond in Legally Blonde 3. Now, if only we knew just whereabouts in production the subsequent final film in the impending Legally Blonde trilogy was.

Well, hold on to your feathery, pink pens and jot down some notes. Witherspoon recently revealed to ET, how preproduction was going. “[We have] a script, but we haven’t shot anything,” the actress revealed. Witherspoon also stated that she has been having a “great time” throughout the process. 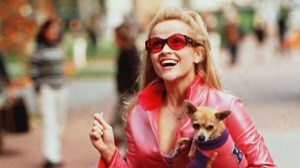 Given that Elle Woods is such an important character to so many fans, it’s no wonder the film is taking time to fully shape, as Witherspoon and the team just want to get it right. “She’s a very beloved character,” Witherspoon continued while attending the Big Little Lies premiere in New York City Wednesday night. “You just want her to go on a hero’s journey like she does in the first movie, and I’m having a great time working on it.”

Elle Woods, and Legally Blonde itself, have become iconic, modern pop culture pieces. Ariana Grande reminded all of us of the film’s continued relevance, importance, and influence when she paid tribute to the film in her “Thank U, Next” music video. It’s very clear the fans, Witherspoon, and the world just needs to have one more chapter of Elle Woods.