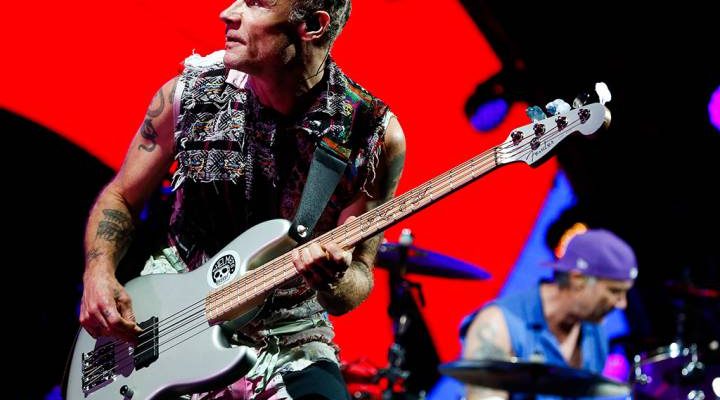 Red Hot Chili Peppers made a surprise visit to a private school in Calabasas, Calif., on Wednesday morning to play a couple of songs. The Viewpoint School students were celebrating their annual “Great Pumpkin Day” assembly when the rock icons showed up in full costumes.

The Rock and Roll Hall of Famers got into the spirit with a rocking rendition of Andrew Gold’s Spooky Scary Skeletons. A note to those who don’t know, it’s a 1996 Halloween song which rose to popularity in 2013 after a series of YouTube remixes. It has since become an annually celebrated internet meme.

As shown in multiple fan-recorded videos, bassist Flea performed in his classic skeleton bodysuit, the same he wore in the band’s best-known live recording at Slane Castle in 2003. Frontman Kiedis resembled an over-sized schoolboy. His outfit included a red jacket, shorts and a Stanley Kubrick-esque mask.

Klinghoffer rocked a neon green wig, sunglasses and a brown suit for an edgy look, while Smith went all out in some papal vestments which he partnered with a Guy Fawkes mask. He stood up tall and held a crosier up high once the song ended. Kids from kindergarten to Grade 12 erupted in applause.

Some of the children were savvy enough to have their cellphones available. A number of videos from the secret show surfaced across all social media platforms.

The Chili Peppers finished their world tour for The Getaway (2016) last October. Between then they have played a handful of festivals and scattered shows.

As of this writing, there has been no official news announcement regarding the band’s status, however social media posts made by the band members have suggested that a followup album is already in the works.