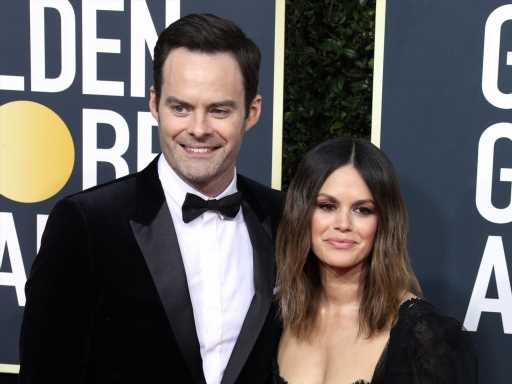 Breakups are tough, especially when they happen in the public eye, but Rachel Bilson is dishing about the one thing she still thinks about when it comes to her ex-boyfriend, Bill Hader. The revealing detail might make you — and him — blush because it’s an intimate secret to share with the world.

On her Broad Ideas podcast with guest Tommy Dorfman, Bilson was asked what she misses from her relationship with the Barry star. Now, get ready for her response: “His big d**k.” OK, girl! She then joked, “We can keep that. … And cut, let’s move on.” How is anyone possibly supposed to move on now that we have this NSFW information about Hader? Well, the former Hart of Dixie actress had a hard time with the breakup initially, so maybe this is her way of joking she’s past the emotionally difficult part of the split.

During her podcast episode with Mandy Moore, Bilson described the breakup as “harder than childbirth” because it occurred during the lockdown period of the pandemic. She revealed that she “could not leave my house” since COVID-19 was raging, so it left her with “nothing else to do but sit in it, and deal with it and feel it.” She added that her heart “hurt like a motherf**ker,” but she doesn’t regret that time of dwelling in her feelings. “If you actually face it, you can come out of it and be like, ‘OK, I did that and I’m ready for the next thing,’” she added.

Hader moved on to actress Anna Kendrick after Bilson, but they went their separate ways in late June. Perhaps there is a reconciliation in Hader and Bilson’s future? It sounds like the 40-year-old actress hasn’t ruled that out since he does get quite a few mentions in her podcast — and the world now knows a whole lot about the size of his penis.