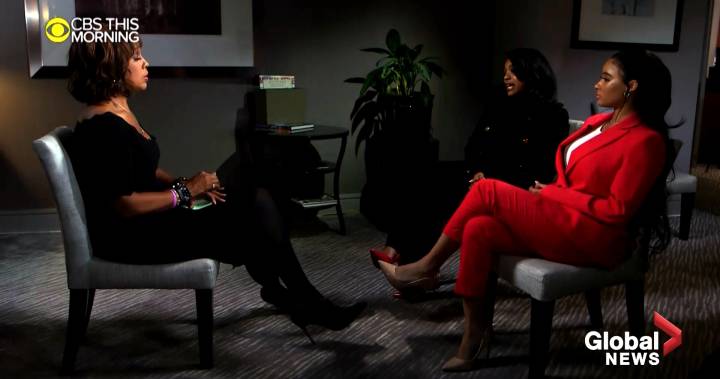 Two women that R. Kelly has identified as his girlfriends allege that their parents, who say their daughters have been brainwashed by the R&B singer, are “basically out here just to get money.”

One of the women suggested that her parents told her to lie about her age when she met Kelly — and say that she was 18 when she was a year younger.

Kelly has suggested that the parents of both women handed them over to him — a charge the families have denied.

The artist, 52, has described them as “my girlfriends. We have a relationship, it’s real.”

In the interview, Clary said she first met Kelly at one of his concerts in 2015. She was 17 years old at the time, and he pulled her up on stage, she said.

Clary’s parents, she said, told her to “lie about my age.”

Savage said she met Kelly when her father brought her to one of his concerts when she was 19.

“Both our parents are basically out here trying to get money and scam,” she said.

Both Clary and Savage were present in court last week when Kelly pleaded not guilty to 10 counts of aggravated sexual abuse.

The singer has been accused of abusing four women, three of whom were between 13 and 16 years old when the acts allegedly happened.

Savage’s family held a press conference on Tuesday, the same day that an interview with Kelly aired on CBS This Morning.

“What I saw on TV this morning, about the way he acted, when he got upset, I can only imagine what he does behind closed doors,” Savage’s mother Jonjelyn said.

Savage called her family after the press conference, telling them, “I have told you guys a million, million times that I am OK where I am and I’m happy.”

For their part, the Savages have disputed the account of how Kelly met their daughter: that Joycelyn’s father took her to a concert, and that she was handed over to the singer.

“We have the ticket request and the ticket records that show that at no point has Mr. Kelly ever met [Joycelyn’s father] Timothy Savage.”

Kelly was thrown back in jail on Wednesday, and he’s expected to remain behind bars until he pays over US$161,000 in child support.

Interviews with Clary and Savage will air on Thursday morning.

CBS will air King’s interview with R. Kelly on Friday at 8 p.m. ET.