A half-mile apart on the Lower East Side of Manhattan, two buildings claim to be putting on theater for the PUBLIC, using boldfaced font to advertise their mission.

There is the Public Theater, the decades-old nonprofit known for its wide red building — a city landmark — and for putting on free Shakespeare performances in Central Park. And there is the Public hotel, a chic new tower by the hotel magnate Ian Schrager that features a red-curtained performance space.

So how publicly available is the name “public” when it comes to serving New York theatergoers?

The Public Theater, officially known as the New York Shakespeare Festival, filed a lawsuit on Thursday against Mr. Schrager and his company, asserting that they violated its trademarks by using the name “Public” — as well a strikingly similar logo — to advertise theater and musical performances.

The lawsuit, filed in the United States District Court for the Southern District of New York, argues that the hotel’s use of “Public” in marketing entertainment events is likely to confuse customers and cause some to assume that the performances are associated with the famed nonprofit theater on Lafayette Street. The Public Theater, which opened its first show in the 1960s, claims that the Public hotel is essentially siphoning off its business by riding on its theatrical coattails. 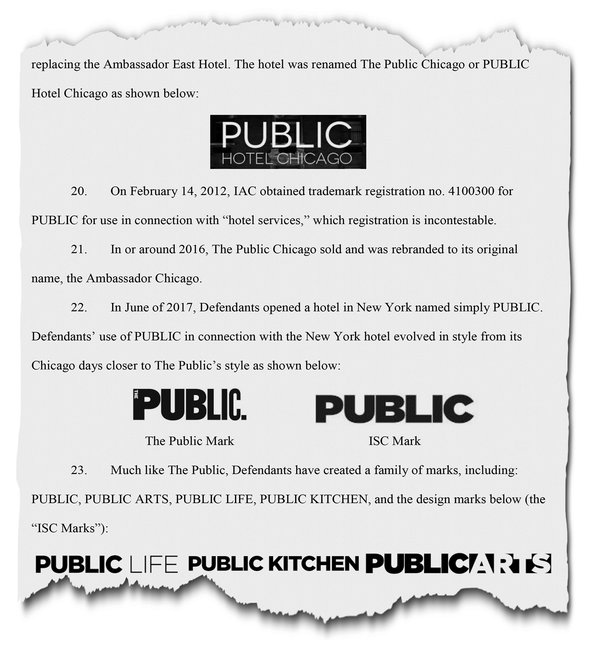 “I remember at least a few donors who have remarked how clever we were to expand just a few blocks south of us,” said Patrick Willingham, the executive director of the Public Theater, in a phone interview on Thursday. But the Public hotel, a 12-minute walk south, has nothing to do with the theater.

“My concern is that it’s confusing to anyone who might encounter their mark,” he said.

The 28-story Public hotel, which opened in the summer of 2017, promises a luxury experience for an affordable price. Mr. Schrager, who founded Studio 54 with Steve Rubell and created the boutique hotel concept with the Morgans Hotel in 1984, called it “the best thing” he and his partners had ever done. (The same year the hotel opened, Mr. Schrager was pardoned for his 1980 tax evasion conviction stemming from his Studio 54 days.)

“Late night hot sweaty dancing” is also on the menu.

Its opening party featured a performance by Patti Smith (a singer who also made an appearance at the Public Theater’s restaurant and music venue, Joe’s Pub, according to the lawsuit).

The most flagrant trademark infringement, the lawsuit said, occurred when the Public hotel hosted an extended run of “Carmen: To Havana and Back,” an adaptation of the Broadway musical “Carmen Jones.” The hotel called it an “exhilarating blend of theater and night life.”

Mr. Schrager said in a statement through his spokeswoman that when his company registered its trademarks for the hotel, the Public Theater did not have any of its own. “We would not have gotten our trademarks if they did,” he said.

He said his company had obtained its trademark on the advice of its lawyers. “I can’t speak to what they did after we got ours or in later years,” Mr. Schrager said. “After being in the business for 40 years with scores of projects having been completed, I think I know a little about registering trademarks to protect our brands and good will.”

Ian Schrager Company registered a trademark for “PUBLIC” in 2012, according to the United States Patent and Trademark Office database, the year after Mr. Schrager opened a hotel with that name in Chicago. The trademark is listed as being used in connection with hotel services.

Mr. Willingham of the Public Theater said he had no problem with Mr. Schrager using the name in association with a hotel. But he said a line was crossed when the name and logo was linked to entertainment, including music and theater.

The Public Theater did not register its “PUBLIC” trademark or its boldfaced logo until October 2017, after Mr. Schrager opened his hotel on the Lower East Side. According to the Patent and Trademark Office database, the theater filed applications for the trademarks in 2015.

Despite its relatively recent claim to the trademark, the Public Theater still has a strong claim to its logo because it began using the design commercially starting in the 1990s, said Barton Beebe, a professor of intellectual property law at New York University. The concept for the logo debuted in 1994 — although there were tweaks to the design in later years.

Because New York theatergoers are quite likely to recognize the logo and associate it with the Public Theater, Professor Barton said, he thinks there is a high likelihood of confusion.

“It’s like someone opening Carnegie Hotels next to Carnegie Hall,” he said in a phone interview. “Everyone would think that’s insane.”

In Mr. Schrager’s statement, he said that his company had not “seen any lawsuit” as of Thursday evening.

“But,” he added, “we fully intend to defend our rights with vigor and right the wrong being perpetrated against us.”