We viewed the first six episodes from the standpoint of writers who have long worked on the serious side of U.F.O.s. We broke the December 2017 New York Times exclusive on a secret Pentagon program investigating the phenomenon, with our colleague Helene Cooper. Leslie Kean wrote the Times 2010 best-seller “U.F.O.s: Generals, Pilots and Government Officials Go On the Record.” Ralph Blumenthal has written about U.F.O.s for Vanity Fair as well as The Times.

So, despite the embellishments, we were interested to discover parallels between the TV version and the historical and current reality.

The History series predictably sensationalizes and over dramatizes case investigations and the historical figures involved, adding many story elements that simply never happened. It’s already hard enough for those trying to understand the truth about government involvement with U.F.O.s without mixing fact and fiction.

Nonetheless, melodrama aside, the real story is there:

Project Blue Book was the code name for an Air Force program set up in 1952, after numerous U.F.O. sightings during the Cold War era, to explain away or debunk as many reports as possible in order to mitigate possible panic and shield the public from a genuine national security problem: an apparently technological phenomenon that was beyond human control and was not Russian, yet represented an unfathomable potential threat. 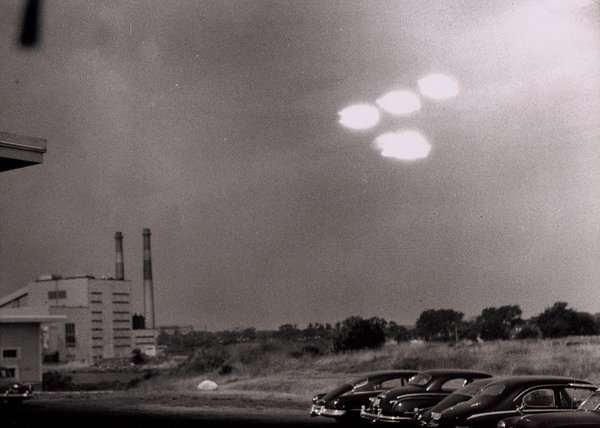 The central character of the TV series, the prominent astronomer J. Allen Hynek, played by Aidan Gillen, was recruited as Blue Book’s scientific consultant and was indeed initially committed to explaining away flying saucers as natural phenomena or mistaken identifications. But he gradually realized that the bizarre objects were real and needed further scientific attention. (Though he never saw a supposed alien creature floating in a tank or crashed in a plane while recreating a reported U.F.O. dogfight, as depicted in the series.)

While Hynek was involved, Blue Book compiled reports of 12,618 sightings of unidentified flying objects, of which 701 remain unexplained to this day.

However, what’s most important to study during that era is what occurred outside Project Blue Book, to the extent that it has been revealed. When we reported on the Pentagon’s Advanced Aerospace Threat Identification Program, which began in 2007, we offered a glimpse into a similar scenario today: military cases being investigated and filmed without the public knowing. This time, however, there was no public agency to accommodate reports of incidents, even when hundreds of witnesses were involved.

We learned through documents from the Pentagon program, and from interviews with participants, that the mystery of the elusive flying objects is still far from solved, and that not enough was being done to address that problem almost 50 years since the close of Blue Book.

It all began in 1947. Lt. General Nathan Twining, the commander of Air Materiel Command, sent a secret memo on “Flying Discs” to the commanding general of the Army Air Forces at the Pentagon. Twining stated that “the phenomenon reported is something real and not visionary or fictitious.” The silent, disc-like objects demonstrated “extreme rates of climb, maneuverability (particularly in roll), and motion which must be considered evasive when sighted or contacted by friendly aircraft and radar.”

A new project, code-named “Sign,” based at Wright Field (now Wright-Patterson Air Force Base) outside Dayton, Ohio, was given the mandate to collect U.F.O. reports and assess whether the phenomenon was a threat to national security. With Russia ruled out as the source, the staff wrote a top secret “Estimate of the Situation,” concluding that, based on the evidence, U.F.O.s most likely had an interplanetary origin.

According to government officials at the time, the estimate was rejected by General Hoyt Vandenberg, the Air Force chief of staff. From then on, the proponents of the off-planet hypothesis lost ground, with Vandenberg and others insisting that conventional explanations be found.

Project Sign eventually evolved into Project Blue Book, with the aim of convincing the public that flying saucers could be explained.

Yet behind the scenes, authorities grappled with something sobering: Well-documented U.F.O. encounters involved multiple trained observers, radar data, photographs, marks on the ground and physical effects on airplanes.

In 1952, the office of Major General John Samford, the Air Force director of intelligence, briefed the F.B.I., saying it was “not entirely impossible that the objects sighted may possibly be ships from another planet such as Mars,” according to government documents. Air Intelligence had largely ruled out an earthly source, the F.B.I. memo reported.

National defense concerns were mounting as well. After Air Force planes scrambled to intercept brilliant objects seen and picked up on radar over Washington D.C., in 1952, Samford called a news conference to calm the country.

He announced that between 1,000 and 2,000 reports had been analyzed and that most had been explained. “However,” he conceded, a certain percentage “have been made by credible observers of relatively incredible things. It is this group of observations that we now are attempting to resolve.”

He said no conclusions had been drawn, but downplayed any “conceivable threat” to the United States.

Later that year, however, H. Marshall Chadwell, the assistant director of scientific intelligence for the C.I.A., concluded in a memo to the C.I.A. director, Walter Bedell Smith, that “sightings of unexplained objects at great altitudes and traveling at high speeds in the vicinity of major U.S. defense installations are of such nature that they are not attributable to natural phenomena or known types of aerial vehicles.”

By 1953, authorities were concerned that communication channels were becoming dangerously clogged by hundreds of U.F.O. reports. Even false alarms could be perilous, defense agencies worried, since the Soviets might take advantage of the situation by simulating or staging a U.F.O. wave and then attack.

Documents show the C.I.A. then devised a plan for a “national policy,” as to “what should be told the public regarding the phenomenon, in order to minimize risk of panic.”

After a closed-door session with a scientific advisory panel chaired by H.P. Robertson from the California Institute of Technology, the C.I.A. issued a secret report recommending a broad educational program for all intelligence agencies, with the aim of “training and debunking.”

Training meant more public education on how to identify known objects in the sky. “The use of true cases showing first the ‘mystery’ and then the ‘explanation’ would be forceful,” the report said.

Debunking “would be accomplished by mass media such as television, motion pictures, and popular articles.”

That plan involved using psychologists, advertising experts, amateur astronomers and even Disney cartoons to create propaganda to reduce public interest. And civilian U.F.O. groups should be “watched,” the report stated, because of their “great influence on mass thinking if widespread sightings should occur.”

The Robertson Panel Report was classified until 1975, five years after Blue Book was shut down. But its legacy endures in the aura of ridicule surrounding U.F.O. reports, inhibiting scientific progress.

“The implication in the Panel Report was that U.F.O.s were a nonsense (nonscience) matter, to be debunked at all costs,” Hynek wrote. “It made the subject of U.F.O.s scientifically unrespectable.”

Hynek, the former U.F.O. skeptic, eventually concluded that they were a real phenomenon in dire need of scientific attention, with hundreds of cases in the Blue Book files still unexplained. Even many of the “closed” cases were resolved with ridiculous, often infuriating explanations, sometimes by Hynek himself.

“The entire Blue Book operation was a foul-up based on the categorical premise that the incredible things reported could not possibly have any basis in fact,” he wrote in the 1970s, when he was finally free to speak the truth.

When Blue Book closed in late 1969, the Air Force flatly lied to the American people, issuing a fact sheet claiming that no U.F.O. had ever been a threat to national security; that U.F.O.s did not represent “technological developments or principles beyond the range of present day scientific knowledge”; and that there was no evidence that they were “extraterrestrial vehicles.”

(Just a few years earlier, in 1967, a glowing red oval-shaped object hovered over Malmstrom Air Force Base in Montana, and all 10 of the facility’s underground nuclear missiles became disabled almost simultaneously while the U.F.O. was present, according to interviews with witnesses and official government reports. Technicians could find no conventional explanation.)

But whatever the Air Force told the public, it didn’t actually stop investigating U.F.O.s. A once classified memo, issued secretly in October 1969, a few months before the termination of Blue Book, revealed that regulations were already in place to investigate U.F.O. reports that were “not part of the Blue Book system.” The memo, written by Carroll H. Bolender, an Air Force brigadier general, went on to say that “reports of U.F.O.s which could affect national security would continue to be handled through the standard Air Force procedures designed for this purpose.”

Clearly, government agencies continued to have some level of involvement in U.F.O. investigations in the decades following — and to the present. Despite government statements to the contrary, once-secret official documents include detailed reports of dramatic U.F.O. events abroad. Many cases at home were not investigated, including a 2006 event in which a disc-shaped object hovered over O’Hare Airport for more than five minutes and shot straight up through the clouds at an incredible speed.

Our reporting for The Times in 2017, which led to briefings for members of Congressional committees, showed that not much has changed since the close of Project Blue Book.

Scientists may know more about the behavior and characteristics of U.F.O.s, and are closer to understanding the physics of how the technology operates, according to A.A.T.I.P. documents and interviews. But the government still makes every attempt to keep investigations and conclusions secret, while denying any involvement to American citizens.