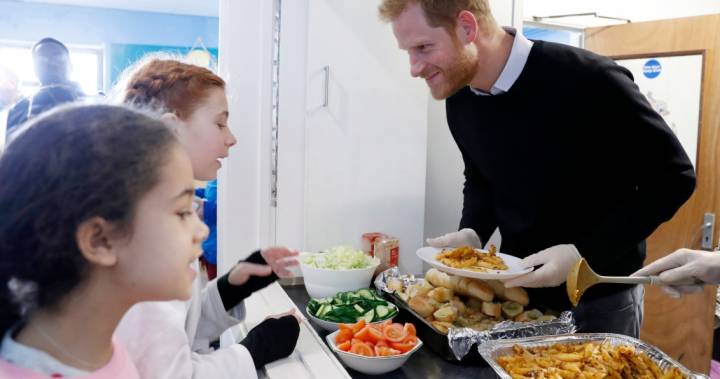 Prince Harry surprised a group of children at the Streatham Youth and Community Trust with a nutritious meal Tuesday.

Part of a larger initiative by Harry’s charity StreetGames, the Fit and Fed program aims to feed kids during the holidays who usually rely on a hot meal at school.

According to a recent survey by the Food Standards Agency, one in four low-income U.K. households struggle to eat healthily or regularly.

Food insecurity is estimated to affect three million of the nation’s young people on a regular basis.

It’s exacerbated on holidays, because the students are at home for prolonged periods of time. Children in the U.K. are currently in the middle of their spring half-term holiday, which runs from February 15 to 25.

Harry also met with volunteers from the Streatham Youth and Community Trust, who organized trampoline and jiu-jitsu sessions for children from the neighbourhood.

The Duke of Sussex’s solo appearance comes on the heels of reports that wife Meghan Markle is in New York City to celebrate the birth of their first baby, due in April.

According to Harper’s Bazaar, Markle’s longtime friend and Canadian Jessica Mulroney is planning the baby shower, reportedly scheduled for Tuesday night. On Saturday, the pair was spotted at Ladurée in SoHo enjoying macarons and tea.

Harry and Markle will travel to Morocco on Saturday for three days at the request of the Queen’s government, the Palace said in a release.