Post Malone suffered a bizarre moment on his Twelve Carat Tour after he was heckled during a meet and greet session.

A brutal video emerged on social media of the Sunflower musician approaching a crowd, interacting with fans and signing merch.

However, someone took it upon themselves to taunt the 27-year-old, jeering from behind the camera.

The young man in question could be heard yelling: ‘Post Malone, you a b***h. You suck.’

Taking the moment in his stride, the rapper simply looked at the unnamed youngster and replied: ‘That’s rude,’ before moving on with his greetings.

This didn’t deter the heckler, as he continued to repeat: ‘You a b***h’. 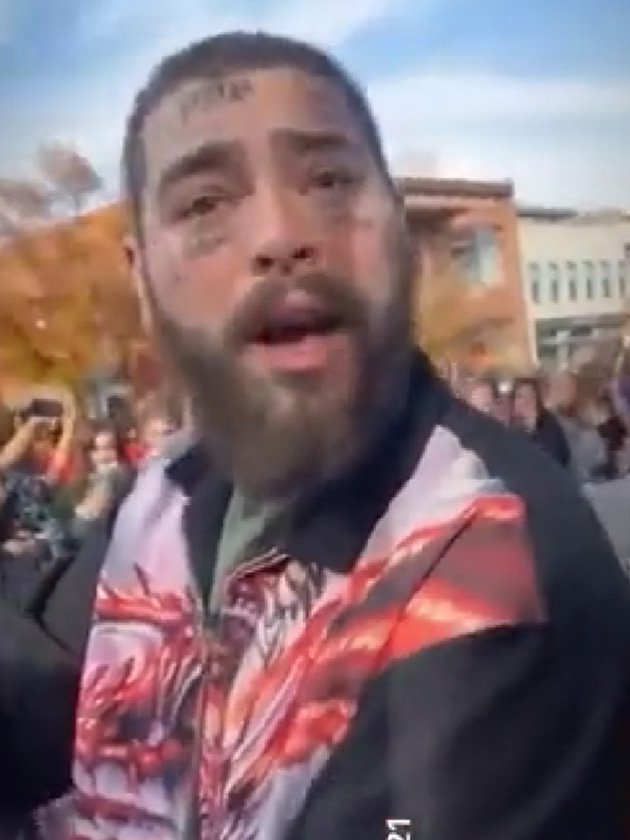 He then flipped the camera over to himself, adding: ‘Post Malone sucks.’

Unsurprisingly, fans have been left raging by the footage, and rushed to shower Post Malone – real name Austin Richard Post – with love.

‘100% Posty must be protected at all costs,’ another said.

‘We ride at dawn. I refuse to let this boy get away with that. Post is so sweet and unproblematic he didn’t deserve this,’ one agreed.

‘This man is the chillest dude ever. I love his music,’ a Twitter user replied, as a fan urged: ‘Don’t u dare insult Posty! He’s the sweetest [sic].’

‘I feel so sad for him poor posty,’ one added.

The I Like You star has yet to publicly speak out over the incident, which comes shortly after he suffered a painful fall at his St Louis show, just a few weeks ago.

According to reports, he was walking down a ramp on stage and appeared to fall down a hole, with medics attending to him,

He was later hospitalized following an unrelated incident, when he experienced serious breathing difficulties – forcing him to cancel a show in Boston.

Post was filled with apologies at the time, explaining that he felt a ‘stabbing pain whenever I breathe or move’.

Thankfully, he made a full recovery and was back on stage days later, promising to put on an incredible show for the audience.