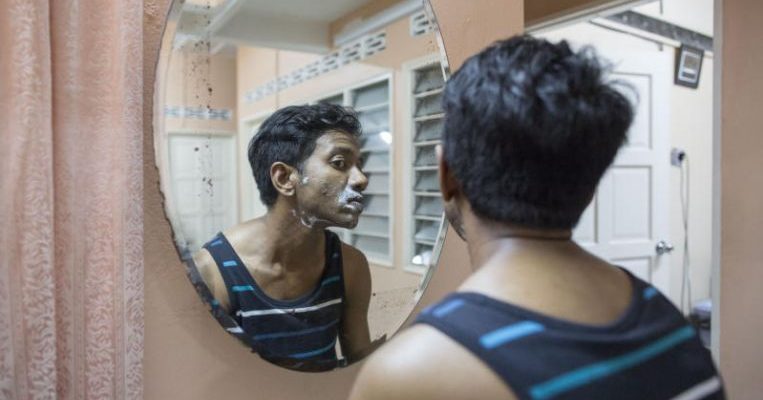 SINGAPORE – Stacks of hormone pills, a man binding his chest, and a university student hugging a soft toy in bed will feature in an upcoming photo exhibition which gives visitors intimate glimpses into the lives of four transgender people in Singapore.

(Un)bound, a solo show by Singaporean photographer Grace Baey, 33, will launch at the Objectifs arts centre in Middle Road next Wednesday (March 13). It is the upshot of the Objectifs Documentary Award (Emerging Category) which she won last year (2018).

Baey’s interest in the trans community began in 2015, when a friend invited her to take photos at the transgender beauty pageant she was organising. The upcoming exhibition, which will feature some 20 photos taken over three years, is an extension of a photo project she has been involved with since then.

“I struggled thinking for a long time how to craft a project that would be meaningful and valuable. I didn’t want to add to the noise and perpetuate certain stereotypes about the community,” says Baey, referring to photos of transgender women on the streets at night or putting on makeup.

She took time to get to know the people in her photographs – Sonia Pravinaa, Jose Jude, Deveshwar Sham and Cassandra Thng – before photographing them proper.

(Un)bound will also feature scrapbooks that were compiled and designed by the four individuals, as well as their letters, journal entries, social media posts and other bits of text. One of these is Thng’s article The Price Of Being Trans (In Singapore), a laundry list of the costs of surgery, vocal therapy and other aspects of transitioning.

Baey says: “I think people tend to assume that transgender identity or gay identity is a lifestyle choice or preference. But I’ve come to learn that it’s a deep-seated identity, and people pay tremendous costs to just be who they are. These costs are not just physical, but emotional, social and financial as well.”

She adds: “Transitioning is not just about undergoing gender reassignment surgery. There are folks who choose not to go through the full transitioning… Who is to argue that a person is male or female enough to be called truly a man or woman?”

One of her subjects, Jose Jude, 30, is featured in a series of eight photos showing him binding his chest.

Jose, who came out to his Catholic Indian family in 2012, felt it was important to exhibit these pictures.

“This story of a pre-op trans man is usually not told- we usually see the post-op pictures,” he tells The Straits Times. “No one really sees what it is like to put on a binder and take it off, the struggle you need to face if you are working for eight, 12 hours. Sometimes it gives you a terrible backache after a long day.

“I want a person who doesn’t wear a binder to understand the struggle of being caged, and why a trans man needs a top surgery so badly. It’s not easy to put on that binder every day.

“There’s a certain (gender) dysphoria that comes with it,” he adds, referring to the distress a person feels when the sex and gender they were assigned at birth do not match their gender identity.

Baey hopes visitors to the exhibition will “take time to step in and experience the journeys these individuals have gone through”.

“It’s taken a lot of courage for them to bare their souls.”