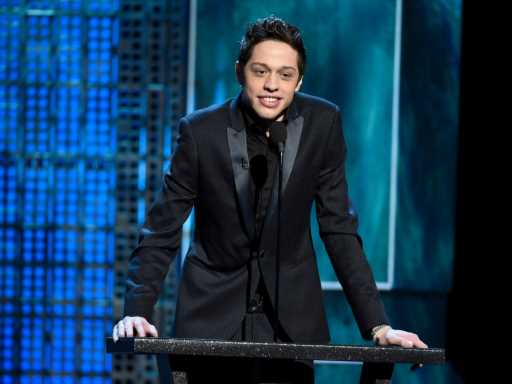 Pete Davidson has already stood up to Kanye West’s bullying ways to protect girlfriend Kim Kardashian, and now, he’s going one step further to show his love for her. It’s not a stereotypical tattoo — that’s too mainstream for the Saturday Night Live star — he went all out with a “KIM” branding.

The branding was revealed during West and Davidson’s weekend texts when the comedian sent the Yeezy founder a photo of himself in bed (and allegedly with Kardashian). It was the SKIMS creator who confirmed that Davidson wasn’t interested in honoring his girl with any ordinary tattoo. “[It] isn’t a tattoo, it’s actually a branding,” Kardashian told a shocked Ellen DeGeneres on her Wednesday show. “Let me explain it… he wanted to do something that was really different.” She revealed he has at least three tattoos already honoring her, including one that reads, “My girl is a lawyer.”

Kardashian called it “really cute” and DeGeneres echoed, “That’s amazing,” so it looks like they are both impressed with Davidson’s romantic artwork. She also divulged the reason as to why he decided to brand her name on his chest. “He’s in the process of getting rid of his arm tats and his neck tats,” she said. “I don’t want to be able to get rid of it or to cover it up, and I just wanted it there as a scar on me.”

This isn’t the first time Davidson has dedicated body art to the one he loves. He famously had at least five tattoos inked on his body in celebration of his engagement to Ariana Grande — they’ve subsequently been removed, but we know this isn’t his first time at the love-tattoo rodeo. The tricky thing about branding is that it is permanent, so that’s quite a commitment to someone he’s only been dating for five or six months. Let’s see how he feels about his “Kim” marking a few years from now.