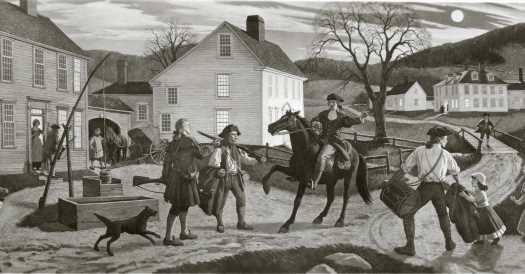 Listen, my children, and you shall hear of more than the midnight ride of Paul Revere. A lot more.

You will hear that Revere was a maker as well as a messenger — a silversmith, a coppersmith and a brass and iron founder. But you will hear about more than teapots, tankards and thimbles.

You will find that he was a peerless networker, a headstrong propagandist, a trusted courier (to the patriots) and a stubborn insurgent (to the British). You will see that he was a sharp-eyed witness whose engravings documented early clashes with the British, including the Boston Massacre.

You will also hear that Revere (1735-1818) was a determined entrepreneur with customers on both sides of the American Revolution. (He made a 45-piece silver service for Boston loyalists a couple of months before the Boston Tea Party, which Revere helped plan.)

“The ride is one day of his life, one very long day in one very long life,” said Lauren B. Hewes, a curator of “Beyond Midnight: Paul Revere,” a new exhibition at the New-York Historical Society. “If you can only be known for one day, that’s not a bad day to be known for, but he did all these other things.”

The exhibition was organized by the American Antiquarian Society, of which Ms. Hewes is the curator of graphic arts. Nan Wolverton, the show’s other curator, is the director of its Center for Historic American Visual Culture. The display includes more than 140 objects from the antiquarian society’s extensive Revere holdings; the New-York Historical Society’s own collection; the Museum of Fine Arts, Boston; and the Massachusetts Historical Society, among others.

Revere’s place in history was cemented by the Longfellow poem, published in 1861, more than 40 years after Revere’s death. Longfellow “was flexible about the historical details,” said Debra Schmidt Bach, who coordinated the exhibition for the New-York Historical Society. “I mean, it was a fictionalized poem,” she said. “It was not intended as a detailed examination of the ride.”

So one goal of the exhibition is to separate the fiction that everybody remembers from elementary school from the facts about Revere. But a recent conversation with Dr. Bach was less about debunking Longfellow and demythologizing Revere than about explaining how Revere fit into colonial Boston society and the infrastructure that the patriots had created long before the first shot was fired.

The poem, Dr. Bach said, was “part and parcel of the whole colonial revival that was gearing up” as the United States faced another crisis, the Civil War. Its publication came shortly after South Carolina seceded from the union.

“People were looking for American heroes to grasp onto,” Dr. Bach said, and Longfellow gave them one in Revere, even if the poem suffers from what the 2007 book “The American Idea” called Longfellow’s “stagy depiction of events and his hagiographic treatment of Revere.” As it happens, “The American Idea” was the work of The Atlantic Monthly, the magazine that printed the original poem. 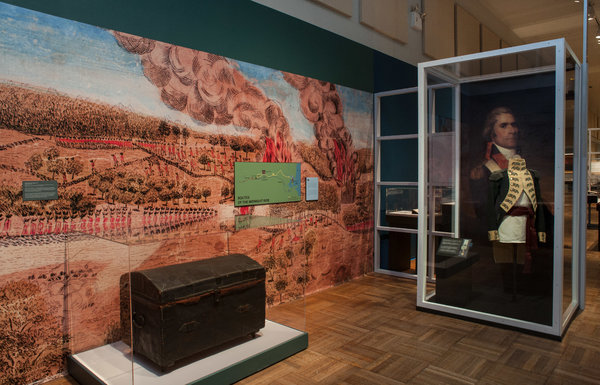 As for the facts, there is no question that Revere became a messenger for the Sons of Liberty, a secret group organized around opposition to British taxation (and not mentioned in the poem). Revere is known to have traveled back and forth between Boston and Philadelphia several times, carrying rebel communications.

“Part of his Revolutionary involvement was he kept an eye on where British troops were moving,” Dr. Bach said. “He was part of a messaging system, and that’s where the lanterns come in”(although some historians say that Longfellow mixed up what the signals meant). Nor was Revere the only rider along the way, as Smithsonian.com explained in a headline in 2017: “The Midnight Ride of Paul Revere and Some Other Guys — The Midnight Ride Wasn’t So Much a Solo Operation as It Was a Relay.”

The exhibition has other artifacts that indicate that the famous ride was not Revere’s only mission. There is a trunk that Revere (with help from John Hancock’s clerk) carried to Hancock when Samuel Adams was in Worcester, Mass. Revere and the Hancock aide, John Lowell, apparently lugged it into the woods as musket balls from the Battle of Lexington were flying above them. There is no record of what was in the trunk, but it was “sensitive enough that the Sons of Liberty wanted it out” of British reach, Dr. Bach said.

The poem turned Revere into a national icon. It also made him a proxy for colonial-era tradesmen, who ranked below lawyers, merchants and religious leaders in society.

Those connections put him in the right places at the right times to document the patriotism he both witnessed and helped to shape. An example is the exhibition’s opening piece, a reproduction of a nine-foot-tall obelisk that was placed in Boston Common during a celebration of the repeal of the Stamp Act in 1766. The curators based the reproduction on an engraving Revere made of the obelisk, which was illuminated from the inside by 280 “lamps” — nothing more than large candles.

The obelisk “ultimately burned down, for the obvious reasons,” Dr. Bach said, leaving only Revere’s visual record of it.

The exhibition also displays several different versions of Revere’s engraving of the Boston Massacre of 1770. One shows the first person killed, Crispus Attucks, who Dr. Bach said was at least half African-American and probably a stevedore.

That engraving also shows Revere to be less than original. Dr. Bach said he copied an engraving by Henry Pelham — the half brother of the painter John Singleton Copley — “and changed it somewhat and embellished it, but printed it faster than Pelham did.” It was Revere’s version, she added, that was “reprinted all over the Boston area and eventually was used in London and in Europe to explain what was going on here.”

Ms. Hewes said that what Revere did “was not unlike a partisan blogger.”

“He understands propaganda, positioning yourself, telling the story in the way you think it should be told,” she said, adding that she suspected that he would have used Twitter.

After the Revolution, Revere started an iron foundry and opened a copper rolling mill, which Dr. Bach said was the first in the United States. Ms. Wolverton said the mill proved that Revere was also a “proto-industrialist.” That is because he maintained that the new nation had to become economically self-sufficient and stop importing basic materials like copper.

Dr. Bach said that copper from the mill was “used primarily to cover the hulls of ships to prevent rot.”

“It was a British technique, and when the young United States Navy started to build ships for their small fleet, they adopted that technique,” she said. Revere had Navy contracts and made copper sheet for the U.S.S. Constitution. He also made copper for Robert Fulton’s steamboat Clermont. And eventually he made copper for kettles.

Still, even after spending five years doing research on Revere, Ms. Wolverton said that she probably would not want to know him.

“I don’t think I would have liked Paul Revere as a person,” she said. “I think he was an aggressive person who kept at something until he achieved his goals. I don’t think his personality is one I’d admire.”

James Barron is a Metro reporter and columnist. He is the author of the books “Piano: The Making of a Steinway Concert Grand” and “The One-Cent Magenta” and the editor of “The New York Times Book of New York.”