ATLANTA — Grace Kisa’s whimsical sculpture, “Love is an Open Door,” features two blue porcelain faces, one with a bluebird on its head, atop brass candlestick bodies. This is her signature — using coils, bottle caps and other unconventional materials inspired by the Kenyan tradition of creating art with found objects. But gallery owners and collectors unfamiliar with the East African aesthetic have closed their doors, she said, calling her sculptures spooky voodoo dolls.

Angela Davis Johnson got a similar response when she showed curators her paintings, which almost always feature black women and fabrics to pay homage to her seamstress mother. One, “An open mouth creek,” depicts a black girl with sad eyes and blue hair whose mouth is shut — though she looks like she wants to talk. It’s a piece that speaks to the silencing of black women throughout history. Ms. Johnson has been told that her work is too political and that she should stay away from race-related issues if she wants to be commercially viable.

“I was told once to focus on black women in a church setting because that is what buyers love,” Ms. Davis Johnson recalled. 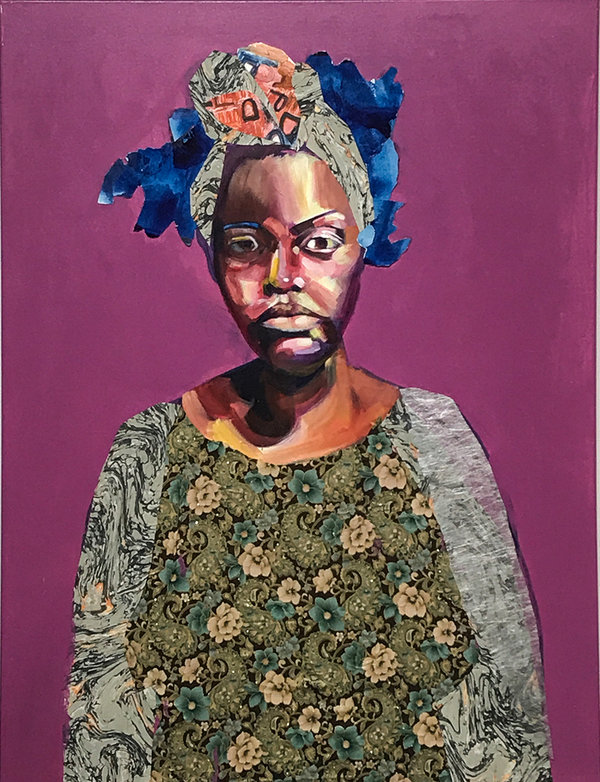 Rejections and aesthetic misunderstandings are walls many black female artists must regularly scale when they seek to make art their full-time vocation and secure gallery representation. According to a study conducted in 2018 by artnet News and In Other Words, since 2008 only 2.4 percent of acquisitions and gifts at 30 major American museums were works by African-American artists. And even in Atlanta, with a population that is 52.3 percent black, there are just a few galleries eager to show work by black women.

Recently, to connect with curators and prospective buyers, 10 female artists tried something dramatic and different: underrepresented in Atlanta, they headed to Art Basel Miami Beach, hoping to get their break at one of the most dynamic, diverse art events in the country.

“We’ve seen a lot of black women exhibit their work here, but not on the level of their white peers,” said Tiffany LaTrice, the owner of TILA Studios, an art studio and exhibition space for African-American women in the working-class East Point suburb, who organized the women’s Miami trip.

In Atlanta, she pointed out, emerging female artists are often funneled into “entry-level shows that aren’t really curated.”

“They have to wait a longer time than their peers,” she said, “so they’re usually older when they hit their stride and I don’t think it has to be that way.”

Ms. LaTrice has made it her mission to change that. Several months ago she contacted Franklin Sirmans, director of the Pérez Art Museum Miami (known as PAMM), a contemporary art museum, about presenting the women’s work and hosting a brunch during fair week. While Mr. Sirmans was unfamiliar with Ms. LaTrice’s group, he has had his eye on Atlanta as an epicenter of black culture since he studied at Morehouse College there.

With sponsorships and crowd funding support, the group headed to Miami. In addition to Ms. Johnson and Ms. Kisa, it included the painters Ariel Dannielle, Ebony Black and Sachi Rome; the multimedia artists Christa David and Shon Pittman; the graphic artists Ayanna Smith and Jasmine Nicole Williams; and the photographer Evelyn Quiñones. Their work would be on display on video screens at PAMM during Art Basel.

Kate Atwood, executive director of ChooseATL, a program of the Metro Atlanta Chamber of Commerce, acknowledged that the city had a long way to go before it could compete with New York and Los Angeles in creating a supportive ecosystem for artists. (ChooseATL followed the artists’ journeys to Art Basel Miami Beach on its streaming channel, THEA.) “We need to make sure that we’re not losing that talent anymore,” Ms. Atwood said.

Signs of progress made by nonwhite artists have filled the news, from rising museum acquisitions to new curatorial positions to the top prices gained recently in auctions. Yet African-American artists and curators interviewed for this article said progress comes slowly, with many barriers to success. According to the Atlanta Convention & Visitors Bureau there are 50 art galleries for a city of nearly 500,000 people — in a state that bounces between 48th and 50th in arts funding.

The artists spoke of limited access to the city’s cultural gatekeepers, who are mostly white. In addition, many black women who are the primary breadwinners for their families cannot afford the studio fees, ranging up to $1,000 per month, that would grant them access to a peer network.

An artist herself, Ms. LaTrice, 29, understands their struggles. Born in Chattanooga, Tenn., she moved to New York and then to Atlanta after earning her master’s degree in women’s history from Sarah Lawrence College. She had no network or connections before she formed TILA. Today her studio trains women how to write a strong artist statement, develop a CV and shoot their work professionally, not just on an iPhone. Her studio is a resource “so they don’t feel alone,” she said.

Ms. Kisa, 50, a full-time artist with a home studio, wistfully recalled the 1990s as a golden age, with the arrival of the National Black Arts Festival drawing talent from all over the world to sell their work. “To be able to walk down the aisle and see work that I saw on ‘The Fresh Prince of Bel-Air’ or ‘The Steve Harvey Show’ — that show was more than a market, it was a cultural experience,” Ms. Kisa said. She added that day care centers brought children to the fair to see the work of the artists — and “they’d go, ‘Girls can draw?’”

When the predominantly white-owned galleries in the upscale Buckhead district did show the work of black artists, “they might have one male and one female,” Ms. Kisa said — something, artists point out, that hasn’t changed much. A handful of black-owned galleries opened to meet the demand of clients looking for African-American artists, but many went out of business after the financial crisis in 2008. And so artists like Ms. Kisa have sought alternative venues, traveling to Jazz Fest in New Orleans to find buyers, but watching the cost of a booth, lodging and transportation slash profits.

Even if Ms. Kisa finds representation by a top-tier gallery in Atlanta, the standard commission is 50 percent, and her prices are not currently high enough to justify splitting profits with the gallery.

Alan Avery, a gallery owner here for nearly 40 years, said he’s looking to represent work with “archival potential,” made with materials “that can go into a museum and hold up over time” — but not all emerging artists can afford expensive materials.

Of 42 artists on his roster, two are black women (he exhibits and sells work by Kara Walker and represents Fabiola Jean-Louis, a photographer whose work addresses the historical treatment of black women from past centuries).

Mr. Avery said that he didn’t mind work that deals with difficult subjects like race, but said that for the first 25 years of his career, African-American artists brought work to him that reinforced stereotypes. “Every painter was doing black men with big lips blowing trumpets,” he said. “They were doing it to appeal to what they thought was the art buyer.” He added, “You have someone come along like Fabiola or Michi Meko, and they’re having some of the same conversation about race, but from a different perspective.”

Arnika Dawkins, one of the city’s few black female gallery owners, said that she did not show any of the kind of work that Mr. Avery described. She opened her gallery in the predominantly African-American, middle-class College Park area in 2012 and exhibits fine art photography on subjects related to African-American history and current events.

But the stereotype conundrum is familiar to Brenda Fannin, who opened her Buckhead gallery four years ago after leaving a successful executive career at Verizon and Microsoft. The work she shows by artists of color is mostly abstract. “Am I being embraced by black collectors? No,” Ms. Fannin said, adding that her taste is not what they expect. On the other hand, she says, white art collectors are not willing to buy from a black gallery owner either. “We fear what we don’t know,” she added.

Ms. Quiñones, 47, who is Afro-Latina, said she had grappled with isolation since she moved here from New York. “There have been times when people will say to me ‘you’re black’ and another person will say ‘she’s not black, she speaks Spanish,’ and they only consider black to be African-American, but black is worldwide.”

Her work focuses on people who are ignored. One photo, of a homeless woman on Peachtree Street, is now a part of Fulton County’s permanent collection, but translating those wins into a living hasn’t happened yet (she has a day job as a graphic designer). Finding a peer network seemed impossible until she joined Sistagraphy, a collective of black women photographers.

In Miami, at the brunch at PAMM, 250 black women artists gathered, and Ms. Quiñones watched her work streaming on a video screen. She described the experience as “empowering and inspiring,” and connected with artists she had long admired, including the multimedia artist Firelei Báez, from the Dominican Republic.

“The most valuable thing has been bonding with other women artists,” Ms. Quiñones said. “This experience has given me the confidence to experiment more and work on the ideas that I have been holding onto into my head.”

So, did an appearance at Art Basel Miami Beach propel any of their careers? It’s too soon to tell.

For Ms. Davis Johnson, 37, the trip to Miami offered exposure to a global audience.

“I’ve been wanting to go to Art Basel for years but there’s always been a barrier, whether it’s with my children or finances,” said Ms. Johnson, who is a single mother to a 6-year-old and 4-year-old. She calls her children “museum babies” and brought them to the fair with her.

She found the streets of Miami draped with art by people from all around the world, and explained that just being in that creative space could make all the difference for her career trajectory.

“To see a room full of black women who are not only saying that they’re artists, but they’re living it — people I admired for so long — it was perfection,” Ms. Davis Johnson said. “People were talking about motherhood, being an art professional and the dedication it takes. I feel my craft, how I approach work, has shifted because of the works that I’ve seen.”

Beyond the brunch, going with the group to Miami empowered her to claim a seat at the international art table, despite the barriers.

“I am not interested in waiting for someone to say yes before I can share work,” she said. “I feel like I’m going to walk away from this experience broader, and with a deeper drive to make work that is illuminating us.”