Doug Mills, a staff photographer for The Times, has been covering the White House since 1983. He spoke with James Estrin this week about photographing President Trump after he returned from covering the Hanoi summit with Kim Jong-un. The conversation has been edited for clarity and brevity.

Q. How much time do you usually have when you photograph the president?

A. With previous administrations, going back to Reagan, you were in a cabinet room for maybe two or three or four minutes. With Trump you can be in there up to 90 minutes.

What does that mean photographically?

Sometimes you feel like you’re a fly on the wall because you can pretty much move around the room, change angles and change lenses. You can study him and look for other people in the room. 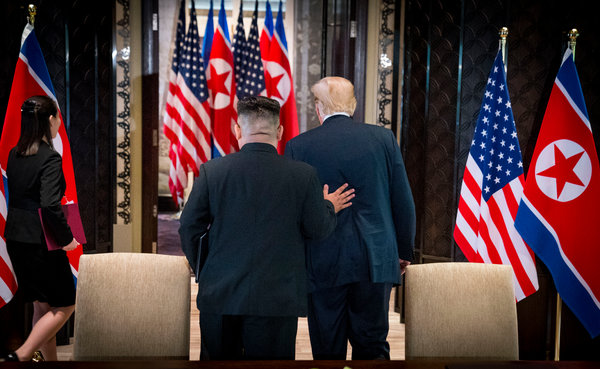 How was this most recent trip to the Hanoi summit?

On a foreign trip, there are a lot more variables, but nobody thought the president would answer questions when he was sitting next to Kim Jong-un, and certainly nobody expected that Kim Jong-un would actually respond to a U.S. reporter’s question. So we were in there a little more than we expected.

It was negotiated that we could preset and wait for them to come into the room. That brought the temperature down so there wasn’t a complete scrum. I don’t think President Trump likes seeing the scrums either but they happen, no matter what, with everybody.

But this one had more decorum and more formality — plus the North Korean photographers and the Americans were in different positions.

The North Korean photographers like to be elevated because President Trump is taller than Kim Jong-un — so most of the U.S. still photographers, there were four of us, knelt down and the North Koreans stood above us, or up on ladders, so Trump wouldn’t look like he was so much taller.

Are you concerned how the president might react to your pictures?

President Trump obviously is a very visual person and he looks at The New York Times daily and online, and on Twitter. So he knows the pictures that I’m producing. People ask, does that make me think twice about taking pictures that are not flattering, and my answer is no.

He’s told me about pictures that he hasn’t liked of mine on a couple of different occasions. He’s very camera-conscious. But he still makes compliments about me or my work.

I appreciate his recognizing good and fair photography and I think that’s what I do. I have no agenda, and I photograph what’s in front of me, and it doesn’t matter whether I think he looks flattering or not flattering, or he looks upset or he looks happy — that’s irrelevant to me.

My job while I’m in with the president at any event is to try to capture the most storytelling photograph. If it’s a meeting that is jovial or happy, then it’s going to show in the pictures. But if he’s upset or frustrated or angry then those pictures will reflect that.

Is photographing this president different in any ways from the previous four you’ve photographed.

Obama was the most photogenic president I’ve covered, and Trump is the most iconic. No matter where you see Trump, what light you see him in, what situation we photograph him in, you know right away it’s him. Whether it’s the hair, his tall stature, his black jackets, the 45 embroidered on his shirts. You just know it’s him.

We have more access to him than we ever had to any other president that I’ve covered. Much more. We’re in photo ops much longer. He knows the power of driving the news cycle. And he does that day in and day out, and in order for him to do that we have to have access to him. He can drive it with Twitter, but if there’s a huge story going out that may not be positive to him, all of a sudden we’re in and there’s something else going on.

When I photographed him in New York before he was president I found that he was very conscious about camera angles.

He knows exactly what our job is.

There was a controversy with Obama when there were fewer and fewer events that the press were allowed into and more situations where his photographer was taking pictures. That’s not what’s happening with Trump, is it?

The Obama folks had a knack for controlling President Obama’s image, and circumvented the media by going around us through Twitter, Facebook and Instagram. There were a lot of situations that we normally would photograph but they chose to use their government photographer to photograph the event and then put it out on social media.

Trump calls the media fake news, and particularly criticizes The New York Times and The Washington Post, yet photographically you are having more access than with previous presidents you’ve covered.

It does bother me when I hear him say that, because I know there’s nothing about my photographs that are fake. We are just there doing our jobs. Clearly I don’t think The New York Times is putting out any fake news.

When you have access to him it’s also less controlled in some ways.

He is not very controlled. His aides can try to control an event, but President Trump will undoubtedly do something unexpected. He’s not a politician and he is not somebody who has been groomed by handlers. So he is more likely to go off-script, more likely to be himself, more likely to do things that are not done by traditional politicians, like letting us in for a cabinet room for 90 minutes.

You’re on the White House Correspondents Association board. What do you do?

I am the representative for the still photographers. And that includes all of the camera and sound people. I am constantly in contact with people who are making decisions about the media at the White House so all of us can do our jobs better and have as much access as we can as a group.

You’ve covered George W. Bush, President Obama, and President Trump for The Times. Before that you also, for The Associated Press, covered Clinton, George H.W. Bush, and Reagan. How has it been different covering each of them?

Reagan was an actor, so when he went on stage he had this charisma and he would light up. His personality just grew as he spoke and as he gestured.

Bush 41 had one of the closest relationships with photographers because he was vice president for eight years before becoming president. He knew a lot of us by first names and had a nickname for us, “photo dogs.” He would invite us to play horseshoes with him and to go jogging with him. He wasn’t trying to play us, that was just his personality. He respected what we did.

When Clinton came in it was a totally different feel. We had plenty of access. He was very energetic and never stopped working. He loved rope lines, knew they made for great pictures and he seemed to get energy from going into a crowd and staying there for 30-40 minutes shaking hands after an event.

His relationship with photographers was not as close as it was with Bush 41 and after the Lewinsky scandal there was less access.

Because of his dad, Bush 43 really liked photographers. He’d also call us photo dogs. He was very athletic and would invite photographers to bike ride with him. He liked to hang out and talk to reporters and photographers at times, just to feel them out, mostly off the record while on the plane or at social events. He was a lot of fun to photograph. He didn’t have the stage presence of other presidents, but he was a character and would do things that made for good pictures.

Obviously 9/11 was important in his presidency. That really drove the image of him being a strong president, although he was the first president I ever saw cry in the Oval Office.

Shortly after 9/11, he teared up while talking about the people who had been killed at ground zero.

Well you had a unique experience with the younger Bush while you were with A.P., didn’t you?

I was with him on 9/11, and I asked to go up on the plane with him. We were flying all over the country on the only aircraft in the air. I think he trusted me.

Part of your job of course is journalistic but it’s also historical.

We are in historic times. Trump’s presidency drives every photographer in town that I work with, and compete against, because there has been so much drama. You never know what’s coming next.

Yes, that’s disturbing to me.

Yet he speaks well of you during the summit with Kim last week, where he said your are “one of the best photographers in the world.”

I think he obviously looks at my pictures and likes them — but not all of them. And that’s not my job, for him to like them all. I think he understands that I’ve been around there a long time and that I am a fair news photographer who does not have an agenda.

Doug Mills has worked as a photographer in the Washington bureau since 2002. He previously worked at The Associated Press, where he won two Pulitzer Prizes for his photography.

James Estrin, the co-editor of Lens, joined The Times as a photographer in 1992 after years of freelancing for the newspaper and hundreds of other publications. @JamesEstrin