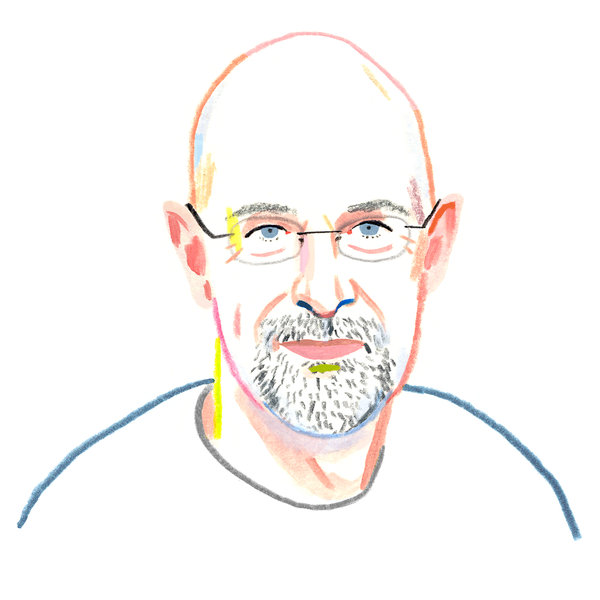 BEHIND THE BYLINE • DANIEL JONES

The Reader Center has started a new series of short interviews, Behind the Byline, to introduce you to Times journalists. Is there a reporter, photographer or editor whom you would like to get to know? Tell us in the form below.

Daniel Jones knows more about love (and heartache and loss) than probably any other journalist at The Times.

As the editor of Modern Love, he has read tens of thousands of personal essays touching on the joy and despair that relationships, in all their forms, can engender. Overseeing the weekly column since it started more than a decade ago, he has helped bring its stories to life as a popular podcast and a television show debuting later this year.

Here, Daniel talks about how he chooses essays, the most memorable ones — and that time he almost died.

What do you enjoy most about being the editor of Modern Love? What is most challenging about it?

I love discovering new voices and stories. You’d think after 14 years at this, I would have seen every love story imaginable. But then I pull up some strange tale full of surprising wisdom and am floored all over again.

The other joy has been seeing how the stories can be retold and reimagined in other mediums by talented actors and directors — both in the podcast, which has been going for three years, and more recently in the coming “Modern Love” television series from Amazon that has been filming in New York.

The challenging part is finding these stories.

We get some 8,000 submissions a year, and the only way to find fresh material is to look at everything. If I’ve slept well the night before, I can get through 150 in a day, which is good for keeping up with the job but not so great for my health. Not only does that kind of volume give you a bad back and eyestrain, it drains you emotionally, because these are often the most important stories in the writers’ lives. Even essays that don’t work can be about devastating experiences. But as an editor, you have to fight the impulse to feel jaded or dismissive, because as soon as you give in to that, you’re done.

The process is probably a lot like online dating. It’s a volume problem, of finding a diamond in the rough. People get numbed by the process and seal off their hearts, but you can only find love (or a diamond, or an essay) if you’re open — every time — to finding it.

How would you describe your editing philosophy?

It’s not really a philosophy, but I believe in the unknown writer and the idea that we all have a story to tell. In doing the work of editing, I obviously want to make the story better, which usually means making it clearer and almost always making it shorter. I think writers often get in the way of their own stories without realizing it, prioritizing language or style over substance. An editor needs to be curious (more than a know-it-all) and trustworthy. These stories can be intensely personal. Handle them, and their creators, with care.

Which essays have left the biggest impression on you?

Ann Leary’s “Rallying to Keep the Game Alive” captures a common marital dynamic in a way that’s completely fresh and revelatory — it’s one I think of often. Heather Burtman’s “My Body Doesn’t Belong to You” grabbed me by the collar and said, way before #MeToo: This is what it feels like to be objectified as a young woman. Mandy Len Catron’s “To Fall In Love With Anyone, Do This” taught tens of millions of people around the world how to be vulnerable with a stranger. And Gary Presley’s “Would My Heart Outrun Its Pursuer?” opened my eyes to how some must overcome the bitterness of disability to allow love in.

I would add 100 more essays if we had the space.

How do you spend your time when you’re off duty?

It’s hard to ever feel off duty. The last time I truly disconnected — cut off from work, email and social media — was three summers ago when I took a weeklong rafting trip with my son down the upper half of the Grand Canyon. Our guides had brought along an original wooden skiff from the early days of Colorado River rafting that was rowed by the boat-maker’s grandson. You sat about 6 inches out of the water in this tiny rowboat that bounced through those huge rapids like a cork.

I saw a story in that and started to take notes to pitch it to the Travel section the second we had cell service. So even there, I found a way to be on duty. But it made the experience more memorable because I was doing everything to make it so.

What’s something that readers would be surprised to learn about you?

When I was in my 20s, I never dreamed I would be in this business, much less have this job. I was hoping, at best, to get a gig teaching writing at a small college somewhere, anywhere. But no one would interview me.

Oddly, though, back then is when I came the closest I have ever come to getting my name on the front page of The New York Times — not as a writer but as a ski instructor, which I was for several years at Deer Valley Resort in Park City, Utah.

One week I was teaching the C.E.O.s of American Express and Squibb Corporation when, after a day of skiing in a blizzard, I drove us down an icy mountain road and lost control of the van, nearly plunging us into a canyon 200 feet deep.

By frantically spinning the steering wheel, I got us sliding in the other direction, where we slammed into a snow bank and were fine.

Afterward I joked that had I gone over the cliff, taking out two of the most important men in business at that time, our story surely would have made The Times. That might have been kind of darkly glamorous? But I think I’d rather make my mark in The Times as a living editor than as a dead driver in someone else’s obituary.