And the Oscar for best Academy Awards host goes to … nobody!

The original plan, of course, was for the comedian Kevin Hart to preside over Sunday night’s awards, until he was dropped for his history of homophobic tweets. So instead of a comedian delivering a monologue, there was a mini-medley from Queen — whose original singer, Freddie Mercury, was celebrated in “Bohemian Rhapsody” fronted by the former “American Idol” contestant Adam Lambert.

So began this hostless, in-a-hurry Oscars, itself a longtime institution moving forward and putting on a show without the public face it started with.

And as it turns out, Hart — or whoever might have replaced him — was hardly missed.

That the Oscars managed a watchable show, much less the brisk, entertaining one we got, was a surprise. The Academy spent months stumbling down a red carpet lined with rakes, deftly stepping on each one. Besides the Hart fiasco, it announced a new category for best popular picture, then retracted it. It shunted four awards to the commercial breaks, then un-shunted them.

The awards show was so in flux until the last minute that, when Tina Fey, Amy Poehler and Maya Rudolph took the stage — which was shaped, for some reason, like the cross-section of a baked alaska — it seemed that the Oscars might have pulled off a cloak-and-dagger feat, hiring a troika of surprise hosts.

“We are not your hosts,” Fey joked, “but we’re going to stand here a little too long so the people who get USA Today tomorrow will think that we hosted.”

No one got to stand anywhere too long at this Oscars, whose production Marie Kondo-ed the show to keep it to its allotted three hours for a change. (It still went a smidgen long.)

This Oscars marched at double-time, hustling from one segment to the next. It was like eating off a conveyor belt: Some delicious moments went past quick, but if the next bite wasn’t to your taste, another bite would be coming soon. 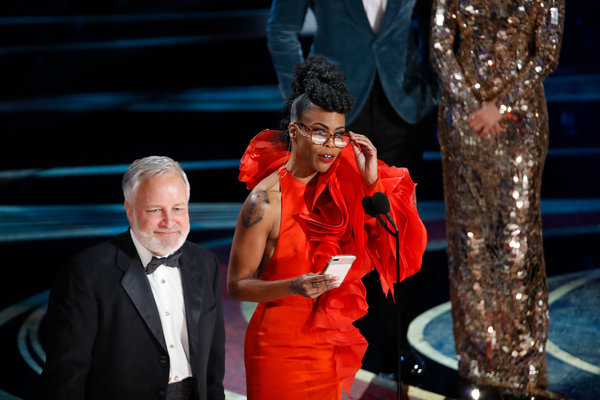 A good Oscars host — Chris Rock, say — can puncture the bubble of rich-people self-congratulation. But the need for a host to “run” the show may be overrated. Most years, the hosts vanish for long stretches after the monologue, and the performance feels like stand-up interruptus.

Instead, the broadcast kept momentum with a string of mini-hosts: Keegan-Michael Key, floating from the heavens with an umbrella to introduce Bette Midler performing a song from “Mary Poppins Returns;” the South African-born “Daily Show host,” Trevor Noah, referencing “Black Panther” by reminiscing about “growing up as a young boy in Wakanda.”

A duet between Lady Gaga and Bradley Cooper on “Shallow” from “A Star Is Born” — recalling one of 2018’s most memorable scenes — had no introduction at all, just the duo walking to the stage from their seats and the camera circling in for a close look.

Maybe the secret to an awards show isn’t joke writing or pizza-and-selfies stunts but faith: trusting in the moments that come from serendipity and emotion — which is to say, usually, from awards. The only way to get those moments is to get out of the way and hope.

Sunday night, they came from winners of less-publicized awards, as when Hannah Beachler, the production-design winner for “Black Panther,” read her speech, trembling, from her phone, and when Rayka Zehtabchi, the director of the documentary short “Period. End of Sentence,” exclaimed, “I’m not crying because I’m on my period … I can’t believe a film about menstruation just won an Oscar!”

They came from non-artists, like the congressman John Lewis, emotionally recalling the beatings of civil rights activists like himself while introducing “Green Book.”

They came from bigger names, like Olivia Colman, who gave the raspberry to the “Please wrap up” direction, and Spike Lee, who upon winning his first competitive Oscar for the “BlacKkKlansman” adapted screenplay, leapt into the arms of Samuel L. Jackson and cited the history of slavery in his acceptance: “Before the world tonight, I give praise to our ancestors who helped build this country.”

Beyond the host drama and the shell game with the awards categories, this year’s Oscars were wrestling with a root problem: What and who are the Academy Awards for? Are they for film buffs or casual watchers? Should they try to offer something for everyone? Is that even possible in this nichified era?

This ceremony may not have solved every awards-show problem (and the ratings may or may not improve). But it managed, by sticking to basics, to reasonably serve all its constituencies. Except, maybe, the shrinking group of comedians who are both famous enough to host the Oscars and still willing to do it.