As a young actor coming up in the Irish theater, Aaron Monaghan was wary of the weight of tradition — the way that classic plays can have the life strangled out of them by preconceptions about how they ought to be performed, and what they mean.

That’s why, for years, he deliberately didn’t read Samuel Beckett’s most famous play, “Waiting for Godot.” He never saw it either, an avoidance unimpeded by his training at the Samuel Beckett Center at Trinity College, Dublin.

“The great irony of studying at the Beckett Center,” Mr. Monaghan, who is 38, said one rainy afternoon this week, navigating the crowds at the Metropolitan Museum of Art, “was that for the three long, intense, wonderful years that I trained there, an incredibly formative time, we never once looked at a Beckett play. Never once.”

Sure that he would end up in “Godot” at 50 or 60 if he had a career, he wanted to come to it fresh. There are Shakespeare plays he still hasn’t read for a similar reason. Beckett’s “Krapp’s Last Tape,” too.

But “Godot” is in his bones now. In the acclaimed Druid company production, running at Lincoln Center’s White Light Festival through Nov. 13, he plays Estragon — though he thinks of the character by his nickname, Gogo. Perched on a rock onstage before the performance begins, amid the hubbub of the audience settling in, he sometimes sings that nickname to himself.

“It just feels like a bit of a lullaby,” Mr. Monaghan said, heading toward the modern paintings. Gallery-going is a favorite pastime when he is on tour, and a Picasso of an acrobat quickly caught his eye.

“I’m liking this guy,” he said, then saw that it was called “The Actor” and laughingly took his statement back. 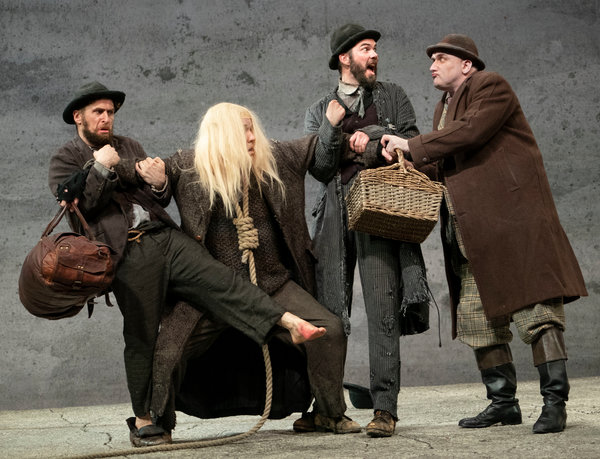 A bit too on the nose? Perhaps, though part of the kinetic charge of the Galway-based troupe’s lively, comical “Godot” comes from the restlessly acrobatic nature of Mr. Monaghan’s Gogo. As Ben Brantley wrote in an admiring review in The New York Times, he does indeed “spring into the air from a sitting position,” a catlike move that is startling to witness in a human.

[Read our review of “Waiting for Godot.”]

“His physicality is obviously at the essence of his talent,” the show’s Tony Award-winning director, Garry Hynes, said of Mr. Monaghan by phone. “It’s part of who he is — almost a kind of dancer’s mobility.”

Paired with Marty Rea’s long, tall Vladimir (a.k.a. Didi), Mr. Monaghan is costumed to look short and stocky. Offstage he’s trim and bespectacled, a gentle, good-humored presence with a rigorous approach to acting. “If you’re not working, you’re preparing for the next job,” he said. “Get into the gym, keep fit, go to galleries, read plays, write: It’s all work.”

By writing, he explained as he reached into his satchel for a bound notebook, he meant the journals he keeps for each play: pages filled with neat rows of his minuscule script and occasional sketches, recording the progress of the show, discoveries he’s made, how he feels.

One thing he’s feeling lately is ready for a break. When the Lincoln Center run wraps up, he will have worked 52 weeks back to back — an “absolutely joyous” time, he said, but also relentless.

He’s eager, once he’s home in Dublin, where he lives with his wife of nearly two years, to get a proper haircut and neaten up — maybe even shave off — the scruffy beard he’s had to leave untouched to portray a Beckett tramp.

Not that he doesn’t love Didi and Gogo. “I think they’re just adorable creatures,” he said.

An Obie Award winner for playing Cripple Billy in Ms. Hynes’s production of Martin McDonagh’s “The Cripple of Inishmaan” at Atlantic Theater Company in 2008, Mr. Monaghan has worked with her since 2005, when she spotted him onstage and envisioned him playing the title role in “The Playboy of the Western World.” After a casual audition that he spent feeling embarrassed, certain he was doing badly, she cast him.

More recently, she tapped him for the title role in her “Richard III,” which The Irish Times in September praised as “both intoxicating and disturbing.” Mr. Monaghan makes a mischievous, cunning Richard, his bent frame all angles as he alternately leans on and gestures with a dark pair of canes. Like Gogo, he vibrates with energy.

“Godot” is a play that Ms. Hynes, Druid’s artistic director, felt no need to revive when Mr. Monaghan, Mr. Rea and two other company members — Rory Nolan, who plays Pozzo, and Garrett Lombard, who plays Lucky — asked her if they could do it. For over a year, she said, she resisted the idea.

The actors themselves, Mr. Monaghan said, thought they were decades too young for the roles. The characters are usually played by older men, though that’s dictated by tradition, not Beckett’s text. But they were looking for a four-hander to do together, and after Ms. Hynes scheduled it for a short run in Galway in 2016, it became an unexpected hit.

In retrospect, Mr. Monaghan attributes some of the production’s energy to the fact that he, anyway, didn’t yet understand “Godot.”

“I didn’t know how the play operated,” he said. “I didn’t know what it was about. And within that, as an actor, you panic. I’m not making excuses, but you maybe overcompensate with physicality or comedy or timing or rhythm or volume or color.” All of which, he added, is now played with a lighter hand.

At the museum, with Gogo on his mind, he stood before van Gogh’s “Shoes.”

In Beckett’s blasted landscape, Gogo has boots that don’t fit and fetid feet that hurt. When he manages to extract them from their boots, they’re painfully red. In this existentialist tragicomedy, footwear is one of Gogo’s major concerns.

“It’s funny,” Mr. Monaghan said, sizing up the painting. “I saw it out of the corner of my head, and I went, ‘Shoes, boots, cool.’ But my thought was, ‘They’re not the right boots.’”

Meaning, that is, that they’re not Gogo’s boots. Which is the track-skipping thought of an actor who’s carrying a play around in his mind.

It was getting toward late afternoon. In a few hours Mr. Monaghan would be slipping Gogo’s boots back on and resuming his seat on the rock. It’s something he can see doing for the next 30 years. But only because, ignoring convention, he started in “Godot” so young.