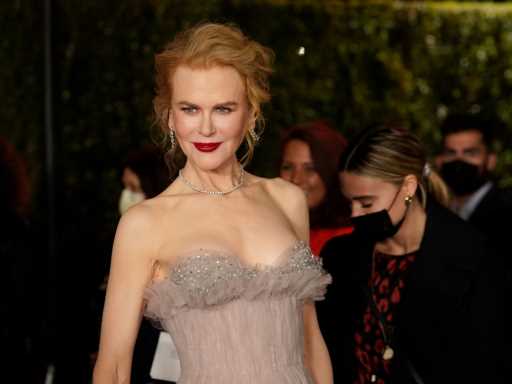 Nicole Kidman is in the prime of her career — just take a look at the work she’s put out over the last few years with Big Little Lies, The Undoing, and now, Being the Ricardos. She’s also the latest actress in Hollywood to hit back at ageism and the idea that their career is over at the age of 40.

Kidman is happy to be vocal about slamming aging stereotypes because she took control of her career by producing many of her projects that are rich and dynamic for a woman in her 50s. “There’s a consensus in the industry that as a female actor, at about 40, you’re done,” she revealed to DuJour. “I never sat in a chair and heard someone say, ‘You’re past your due date,’ but I’ve had times where you’re turned down and the door is shut on you.” She realized the power was in her hands and she had to keep “changing and moving,” just like like Lucille Ball did to become a pioneer in the television industry. (See her stunning photos HERE.)

This isn’t the first time the Oscar winner has expressed her disappointment in the entertainment industry for not seeing women for who they are as they age. They bring wisdom and depth of character — and yes, they are still sexy. “I was frustrated – as so many women are in different careers – at the idea of being told, ‘Well, that’s it. You’ve passed through that period where it’s all going to be fine and now you’re in your 40s we’re not interested as much in your storytelling or your ideas or in who you are as a woman or a person,’” she said to The Mail on Sunday’s You magazine.

Kidman also has the support of other female power players in Hollywood with Reese Witherspoon, Paulina Porizkova and Halle Berry making big statements about changing how society views women. That call for change extends beyond TV and film, so these women are using their platform to help make a meaningful shift in the perception of being a woman — and being allowed to have a voice at the table.

Before you go, click here to see all the celebrity women who have spoken out about ageism.