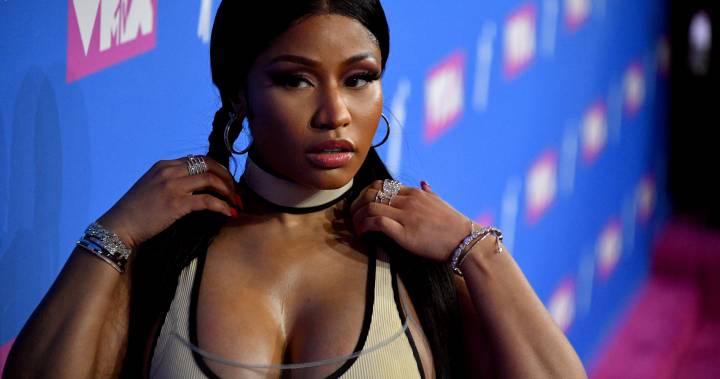 Nicki Minaj has cancelled two scheduled BET events after the network appeared to insult her on social media on Sunday night following Cardi B’s victory for Best Rap Album at the 2019 Grammy Awards.

BET referenced Minaj while congratulating Cardi B on her award for best rap album, which was the first time in history it’s ever been done by a solo female.

The tweet was attached to an article titled, “Cardi B Is The First Solo Female Rapper To Win Best Rap Album, And Fans Are Weeping” and the tweet read, “Meanwhile, Nicki Minaj is being dragged by her lacefront.”

The original tweet has since been deleted, and the article was reshared with another caption.

Minaj took offence to the post and tweeted in response, “Young Money will no longer be apart of the BET Experience or award show,” she wrote with hearts and a praying hand emoji. “Summer Tour dates dropping soon.”

Minaj also posted a screenshot from her conversation with Lil Wayne.

It shows herself and Lil Wayne having a conversation about BET’s post. She tells the rapper she is no longer performing for BET and he says, “I’m with u!!”

“#Loyalty love him. Forever. The GOAT. My brother. My boss. My inspiration. #YoungMoney,” Minaj captioned the photo.

#Loyalty love him. Forever. The GOAT. My brother. My boss. My inspiration. #YoungMoney

Minaj posted screenshots of the since-deleted post from BET and thanked her fans for their support.

“I can’t thank you guys enough for all the love & support you continue to show me,” she wrote with heart and unicorn emojis. “To everyone who said something sweet, thank you. Whether I read it or not, I felt it. From the bottom of my heart. I love you so much. So so so soooo much. Stay tuned.”

BET has since apologized to Minaj and her fans for the tweet.

“BET loves Nicki Minaj. We have supported her from the very beginning of her career and will continue to do so moving forward. Nicki has paved the way for so many performers and has solidified her place as one of the most powerful figures in the music industry,” the apology from a BET spokesperson read.

It continued: “Unfortunately the respect we have for Nicki was violated by a post that should never have been written. The post does not reflect how we feel about Nicki. And further does not reflect our company values. We deeply apologize for the hurt, disappointment and confusion that this post has caused. We are committed to doing everything we can to address the situation.”

“We are also conducting an internal audit to assure these types of posts are not published again. We have apologized to Nicki and her team. The post has been removed and we have taken additional appropriate action,” the apology read. “We understand Nicki’s position and look forward to continuing our dialogue with her. Finally, we apologize to all of her fans. This should have never happened.”

The Good Form rapper continued to tweet out fan comments that “dragged” BET.

“Meanwhile, BET is being dragged by their lace front,” Minaj captioned screenshots of the comments.

Minaj and Cardi B have long been rivals.

Some would say the beef began when Cardi B stepped on stage at the Hot 97 Summer Jam with Minaj‘s friend-turned-enemy Remy Ma in June 2017, but others would say it came down to the Migos song Motorsport featuring Cardi B and Minaj.

Things escalated in September after footage of a physical altercation between the rappers at the Harper’s Bazaar Icon party was released.

Minaj and Cardi B got physical at a New York Fashion Week party, leaving Cardi B with a mark on her head. In one of several videos posted to social media, Cardi B, wearing a red dress, can be seen lunging towards Minaj before throwing a shoe at the rapper as their security teams break it up.

In October, the pair called a truce on social media after Minaj tweeted that she wanted to focus on “positive things.” Cardi B took a screenshot of the tweet and posted it to Instagram, captioning it: “@Nickiminaj alright then! Let’s keep it positive and keeping it pushing!”

Cardi B deactivated her Instagram page following the BET backlash and apparent abuse she’s received after winning her Grammy award.

Cardi B said in her video, “It’s not my style for people to put other people down to uplift somebody else.”

She posted the expletive-filled video before deleting her account.

“I remember last year when I didn’t win for Bodak Yellow, everybody was like, ‘Cardi got snubbed, Cardi got snubbed.’ Now this year’s a f**king problem?” she said. “My album went two-time platinum, my n***a. And every chart that there was, my album was always top 10. Number one album as well. I f**king worked my ass off, locked myself in the studio for three months, my n***a, then went to sleep in my own bed, sometimes for four days straight, pregnant. Some songs couldn’t even get on the f**king album because my nose was so f**king stuffy from my pregnancy. N***as couldn’t sleep, n***as couldn’t do sh*t.”