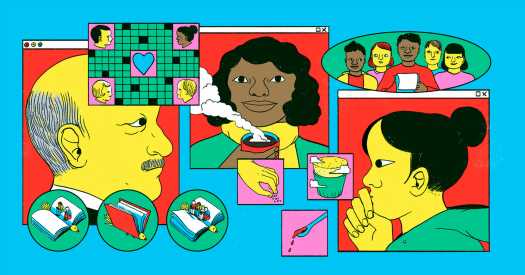 After visiting The Times’s website to catch up on the news or read your favorite columnist, do you A) dash off to the rest of your day, or B) stop to have a virtual cup of coffee and conversation with other readers?

Every month, tens of thousands of readers pause on our site to do the latter, joining one of our many online communities. In one, octogenarians mingle with millennials over a shared love of crossword puzzles. In another, readers help each other experiment with new and old recipes, while sometimes sharing stories, life lessons and even relationship drama.

Here are a handful of the most active Times communities. We welcome you to jump in — no secret handshake required.

Wordplay, the daily crossword column, has attracted a small, tightknit community. The group of about 150 “puzzleheads” swaps solutions, checks in on one another and, occasionally, frets over each other’s health. Some have even met in real life. The group includes readers of different ages and backgrounds, but they’re all bound by their shared love of crosswords.

“It’s an increasingly polarized world we live in, but the New York Times crossword community has been consistently kind and supportive in a big way,” Bruce Haight, a crossword puzzle constructor, commented on a Wordplay column.

Deb Amlen, who writes the column and is a regular fixture in the comments, said she thinks of the commenters as family. She responds to readers, at times scolding them when conversations get overly heated. And like a proud parent, she applauds them when they achieve a personal best, regularly bestowing solvers with medal emojis on Twitter.

“It’s sort of like being invited into my home for dinner,” she says. “If I didn’t take care of them, I wouldn’t be a very good host.”

In the Cooking section, readers have left more than 250,000 comments, called “notes,” to help others make a recipe more authentic, avoid mistakes or substitute a particular ingredient.

Some notes have taken on a life of their own.

In the notes for her favorite brownie recipe, a reader named Sydne Newberry left a helpful tip back in 2015: “Using the best cocoa possible makes a difference. These days, I use Callebaut.”

Then she shared a memory that broke the internet.

“In the ’80s, an acquaintance in Germany to whom I brought some of the brownies, and who considered herself a great cook, asked for the recipe but was never able to get it to work,” Ms. Newberry wrote. “She kept asking me what she was doing wrong and I was never able to solve her problem. Eventually, she moved to the U.S. and stole my husband!”

After the note took off on Twitter, Ms. Newberry was interviewed by NPR and New York Magazine, which hailed it as “the greatest internet recipe comment of all time.”

Every weekday, nearly a third of The Times’s digital articles are open for comments, drawing readers from around the world into conversations with one another and our journalists.

After the shooting in Thousand Oaks, Calif., in 2018, a reader in London named Kostas Giannakakis commented on one of our articles about the attack to ask other readers how it had affected their view of the United States.

“If you were someone living outside the U.S. who is following the news about a new gun massacre every other day, would you feel safe and assured to visit the U.S.?” he wrote.

More than a hundred readers weighed in.

“Many of us are in shock so consistently by these events that it numbs us,” one reader replied.

Sometimes, reporters jump into the comments sections on their articles. Elizabeth Dias, our National religion correspondent, joined a conversation on her article about gay Catholic priests after readers wondered why the priests in the story joined the church in the first place. She wrote a comment that provided additional insight into their lives: “Many were barely at the age of puberty, and were not able to understand their sexuality for years, or how the church would structurally restrict it.”

Larry Eisenberg, a titan of our comments sections, was The Times’s unofficial poet in residence, submitting over 13,000 comments in limerick form on an array of topics including geopolitics and home décor before his death in December at age 99.

He was remembered fondly by fellow commenters, who eulogized him in limericks. One read: “Larry Eisenberg, who, for the Times / Wrote all of his comments in rhymes / Took news that was frightful / And made it delightful / And now up to heaven, he climbs.”

Metropolitan Diary’s comments sections bring together lovers of New York to talk about their favorite city.

Allen J. Share is one of the most prolific members of the friendly group, commenting nearly every Monday when new entries are posted. On a recent vacation in Italy, he remembered that another frequent Metropolitan Diary contributor, Anne McAdoo, lived in Rome. So they met up for dinner, initiating their plans in the comments.

It wasn’t easy, though, Ms. McAdoo said. She wasn’t sure Mr. Share would be able to contact her through the comments, so she cryptically dropped her last name in the comment thread by writing: “A former NYC basketball player, McAdoo, said something similar. It would be nice to see you soon.”

Mr. Share didn’t get the hint, but he posted the name of his hotel and when he would arrive, and Ms. McAdoo was able to reach him on the phone. After dinner together, Mr. Share continued his tour of Italy, and they promised to stay in touch.

The New York Times Learning Network gives middle and high school students the space to respond to news articles, participate in contests and engage in a dialogue that extends beyond the classroom.

Susan Carney, a teacher in New Jersey, says she uses The Learning Network in her classroom by having her students respond to its writing prompts in The Times’s comment sections.

“My students not only consider how their words might be received by a writer at The New York Times, but also by the wider audience of readers,” Ms. Carney wrote to Learning Network editors. “It makes them aware that their voice was heard and their words might resonate with someone.”

Four Facebook groups — The New York Times Podcast Club, Now Read This, Voting While Female and Examining China’s Reach With The New York Times — offer readers a place to discuss topics including podcasts and politics in forums moderated by our journalists.

The Podcast Club, which picks one episode from a podcast every week to discuss, was started by Samantha Henig, The Times’s editorial director for audio. The group began in 2016 as a weekly meeting during which Times staff members chatted about podcasts in a conference room and evolved into a public Facebook group after its first year. In addition to billing itself as a “book club for podcasts,” the group is a forum for readers to discuss podcasts covering a range of themes, like Star Wars and true crime.

Voting While Female seeks “open-minded females and like-minded allies” from all political backgrounds to join in thoughtful round-table discussions on politics. Members discuss how their political views have evolved and how they navigate politics at work. The group maintains a strict policy against bullying or trolling other commenters.

For readers in China, Examining China’s Reach provides a forum to share and discuss the most thoughtful and provocative journalism on China.

The group also gives insights into what it’s like to be a reporter in the country. Our technology reporter Paul Mozur recently shared in a post: “During a reporting trip last year I was followed everywhere, even into the bathrooms by a group of seven plainclothes police. At the ubiquitous checkpoints police stopped me and deleted photos and videos.”

What communities would you like to see in the future? Let us know in the comments.