Some credit for the almost unbearable intensity of “Perilous Bodies,” the group show that inaugurates the Ford Foundation’s new gallery for art concerned with social justice, goes to its 19 artists from around the world. Confronting ills from sexual violence in India to resource extraction in Africa, most of them succeed in getting to the heart of very difficult material. (The gallery was part of an overall renovation, and most of the work in the show is unrelated to the foundation’s contemporary art collection.) But most of the credit is due to the show’s curators, Jaishri Abichandani and Natasha Becker, who wove their work together.

Because balancing artistry against anguish is so challenging, and because such a balance is even more sensitive to its context than art usually is, no single piece can be sure of landing cleanly on its own. Mohamad Hafez’s delicate dioramas of half-destroyed Syrian buildings might register merely as beautiful, and Tiffany Chung’s backlit photos of similar rubble, taken alone, are tonally ambiguous. Tenzin Tsetan Choklay’s movie “Bringing Tibet Home,” which follows his friend and fellow exile, the artist Tenzing Rigdol, as he smuggles a truckload of Tibetan soil through Nepal to Dharamsala, India, is undeniably melancholy, but it’s also as absorbing as “Indiana Jones.”

Viewed all together, though, under a spray of 418 cast-foam miniature Hellfire missiles — the Pakistani-American artist Mahwish Chishty’s memorial to the civilian casualties of American drone strikes — they’re as shocking as getting hit by a truck. Stagger into the next room to see Teresa Serrano’s extremely disturbing short video “La Piñata,” in which a man alternately gropes a small female mannequin and beats it to pieces; the Australian artist Hannah Brontë’s equally unsettling all-female rap video about climate catastrophe; and Dread Scott’s 1999 installation of six shooting targets, one for each of six black men killed by the police in the 1990s, over a wooden coffin (“The Blue Wall of Violence”). Then go into the Ford Foundation’s tranquil, tree-filled atrium and sit quietly for a while. WILL HEINRICH 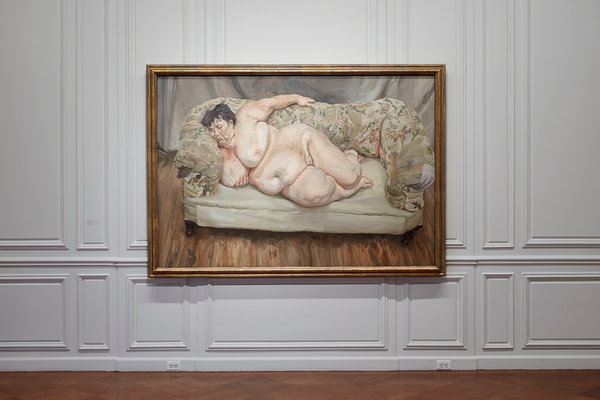 Dumb flesh, male and female alike, was the climactic challenge of painting for Lucian Freud, whose late work grappled ceaselessly with whether a body can ever become a picture. The British portraitist, who died in 2011 at age 88, bore down on his models and refashioned them, not quite realistically, into meaty slabs of oil paint. “Monumental,” the first proper show of Freud’s paintings in New York since his death, is up now at Acquavella, which has assembled a baker’s dozen of Freud’s larger nudes from the 1990s and 2000s, depicting the outré performer Leigh Bowery, the Rubenesque model Sue Tilley, known as Big Sue, and other subjects of his obsessive gaze — though not, I’m sorry to say, pregnant Kate Moss! (An exhibition of his self-portraits opens this fall at the Royal Academy in London.)

Self-consumed and rashly promiscuous — he had 14 acknowledged children, and fathered who knows how many more — Freud leaned into stereotypes of the old-style artistic genius in both his life and his paintings. In “Naked Portrait With Green Chair” (1999), he renders a model’s drooping breasts and cellulite-pocked thighs so pitilessly that the picture verges on the self-parodic. Freud’s dementedly long sittings, too — every day for 16 months, for the model lounging in “Ria, Naked Portrait” (2006-7) — can seem like a performance-art version of a tortured visionary seeking unobtainable “inner truth.” (Mr. Warhol and Mr. Richter look on with sweet incomprehension.)

Yet look at the large, landmark “Benefits Supervisor Sleeping” (1995). Freud painted the nude Ms. Tilley asleep on a sofa, her face smushed into the floral-pattern cushion, her belly flopping over her right thigh, her pasty skin cast as streaks of the artist’s favored Cremnitz white. She is observed slightly from above, at an angle that feels by turns forensic or familiar. Here Freud’s exactitude comes across as a much more generous act of transubstantiation, as if the body, turned into paint, might live a second life in its reconstituted form. I had seen this painting in reproduction countless times since its record-breaking sale in 2008, but there is no substitute for seeing it, as Freud would say, in the flesh. JASON FARAGO

Gretchen Bender (1951-2004) was part of the first generation of artists to grow up with television, and she and her fellow travelers in the art world often used television as a subject and a medium for their work. An exhibition devoted to her career was mounted at the black-box theater space the Kitchen in Chelsea in 2013 and now a retrospective, “So Much Deathless,” is at the glossier white-box Red Bull Arts.

The “black box” mention is not superfluous. In the early ’90s Ms. Bender was in contact with the media critic and philosopher Vilém Flusser, who called technological apparatuses like cameras or televisions impenetrable “black boxes;” the artist’s job is to penetrate these black boxes and reprogram their functioning. Ms. Bender did that beautifully, sometimes by simply printing deadpan black text onto a TV monitor and letting broadcast images babble underneath: “Race Class Gender” over cartoons, or “Narcotics of Surrealism” over images of Donald Trump on Fox News.

Lesser-known works are here, like “Volatile Memory” (1988), a 13-minute film she directed with Sandra Tait and starring the artist Cindy Sherman as a cyborg under government surveillance, or laminated color photographs and smaller video sculptures. Also on view is “Total Recall” (1987), an 18-minute symphony of pulsing sound, corporate logos, movie titles and computer graphics spread over 24 monitors and 3 projection screens. One would imagine that “Total Recall” would feel dated, but it remains a brilliant critical look at how media images work, capturing and directing our attention. Moreover, looking around the room and seeing viewers recording the experience on their cellphones felt like a new layer to the work Ms. Bender would appreciate, and perhaps approve. MARTHA SCHWENDENER 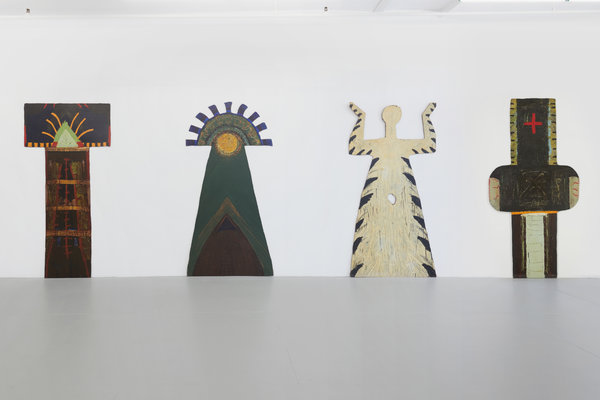 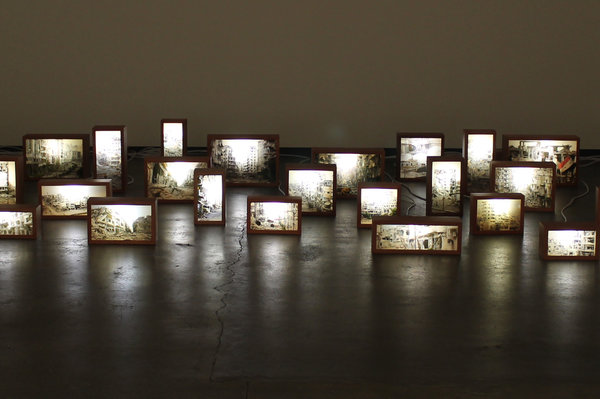 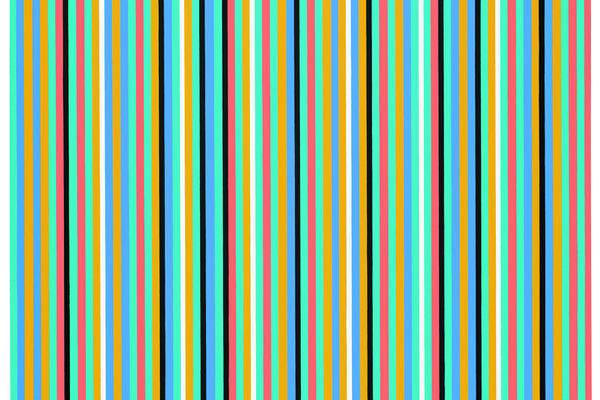