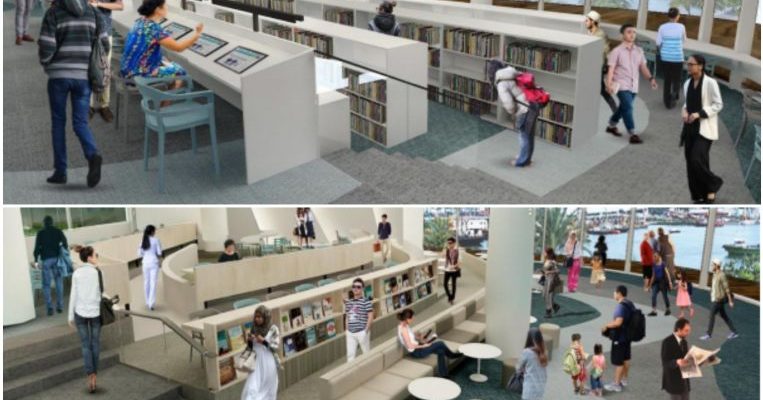 Bukit Merah Public Library will reopen as library@harbourfront in VivoCity on Jan 12.

The library on the third storey of the sprawling shopping mall will draw three times as many visitors as before, the National Library Board (NLB) said this week, reiterating its view that the move will make the library easier to reach by public transport.

News of the relocation, first announced in July last year, sparked an online petition as well as complaints from netizens.

They said the new location on the island’s southern tip – more than 3km away, and not as close to residential estates – would leave behind the current library’s user base of students and the elderly.

The petition has since garnered nearly 1,000 signatures.

The current Bukit Merah library is a three-storey building in Bukit Merah Central that has been a fixture in the neighbourhood since 1982. It will lower its shutters for the last time on Nov 30.

Bukit Merah Public Library saw about 500,000 visitors last year, half that of similar-sized libraries such as Bishan Public Library. At VivoCity, which is next to the HarbourFront MRT interchange, the number should reach 1.5 million a year, said Ms Catherine Lau, NLB’s assistant chief executive for public library services.

TOO FAR FOR SENIORS

There are many elderly people who come to the library for leisure, and they honestly wouldn’t go that far away (to VivoCity).

STUDENT AND REGULAR LIBRARY USER GABRIEL KOH, who says the current library is near his home and a good place to study.

The move is part of NLB’s efforts to move public libraries to locations such as malls and town hubs, which have more human traffic. Tampines Regional Library, for example, has moved to Our Tampines Hub, while Yishun Public Library has reopened at Northpoint City.

At 3,000 sq m, library@harbourfront will be Singapore’s largest shopping mall library. It will have 16 eNewspaper stations, a children’s area, a multipurpose zone and a reading lounge with 120 seats. Visitors can also expect a refreshed collection of 200,000 books, similar to the size of the collection at Bukit Merah Public Library.

The new library will not have to pay any rent, thanks to the Urban Redevelopment Authority’s Community and Sports Facilities Scheme, which gives developers extra spaces for community and sports uses.

After the old site is vacated, grassroots leaders and social service organisations will offer services and programmes at the library’s former site, including a mini-library and reading corner supported by NLB.

People living in the area have lamented the library’s impending closure, saying that they appreciate the convenience of the location and the fact that the library is peaceful and not too crowded.

Retired cleaner Yeo Boon Hock, 68, who visits the library daily to read newspapers, said he understood the rationale behind the move. But he doubts he will visit the new library as often. He said: “The things here are cheaper, there are hawkers (nearby). VivoCity will be more expensive.”

Tax accountant Irene Ong, 40, visits the library with her family about twice a month. “It doesn’t make much sense to have a library in a mega-shopping mall,” she said, adding that students planning on studying in the library will face a lot more distractions.

To address residents’ needs, the NLB has over the past year set up 12 reading corners in the Bukit Merah area, which will still be in use after the new library opens.

The reading corners, which are stocked with books, can be found in various community centres, senior activity centres, the Enabling Village, Beyond Social Services, St Andrew’s Senior Care, Teens Network Club@Bukit Merah and the We Love Learning (WeLL) centre at Henderson.

Student Gabriel Koh, 23, who visits the library twice a week after classes, said he likes the library because it is within walking distance from his home and the atmosphere helps him focus.

However, he is not against the idea of studying at a reading corner. “As long as there is a table for me to use, I would go there.” But he added: “There are many elderly people who come to the library for leisure, and they honestly wouldn’t go that far away (to VivoCity).”

The library board will also consider sending one of its Molly mobile libraries to the neighbourhood every fortnight, so residents can enjoy more books and programmes.

Bukit Merah residents will be invited to a tour of library@harbourfront a week before it officially opens. More details will be released this month.