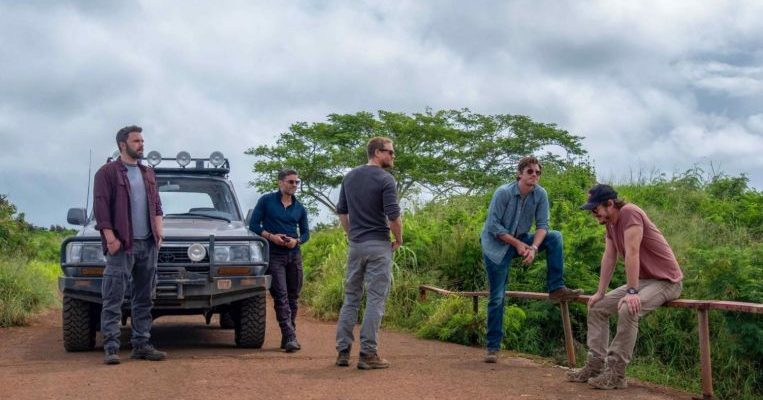 SINGAPORE – Triple Frontier is a military action thriller that takes a different path.

The team of ex-soldiers are weapons experts with reluctant trigger fingers. They head into life-or-death situations without catchphrases or quips. And while the story is about the team taking on a drug lord, there are no villains in the story – the dangers they face happen as a result of their own vices.

Chuck Roven, 69, the producer of the movie, said that the film takes the military genre “and turns it on its head”.

He was speaking at a press conference at Marina Bay Sands last Saturday (March 9) together with the film’s stars – Charlie Hunnam, Ben Affleck and Garrett Hedlund.

Affleck, 46, who plays the leader of the team, poured cold water on the notion that because the cast is mostly male actors sweating it out in action sequences, the set was awash in testosterone.

Former special forces members on the film’s advisory team taught the actors that men in these units value teamwork and camaraderie over all else.

“This is not about telling a male story or masculinity but a story rooted in the truth of the special forces,” he said.

The story, which also includes Oscar Isaac and Pedro Pascal playing members of the team, kicks off when the former warriors find themselves struggling emotionally and financially in civilian life.

When they learn of a massive money cache in a secluded location in an unnamed South American country, they decide to steal it. The problem is that the money is in a drug lord’s compound, protected by armed guards.

The screenplay began life under the pen of former journalist Mark Boal, the Oscar-winning writer behind the script for war drama The Hurt Locker (2008). For the telling the story behind the hunt for terrorist leader Osama bin Laden in Zero Dark Thirty (2012), Boal’s screenplay received an Oscar nomination.

Boal’s stories are known for touching on deeper issues beneath a layer of action and suspense. In The Hurt Locker, it was the effect of war on the psyche of a bomb-disposal expert. Zero Dark Thirty earned controversy because of its portrayal of the use of torture to obtain intelligence.

In the Netflix film, the screenplay, co-written with director J.C. Chandor (Margin Call, 2011; All Is Lost, 2013) is also topical.

British actor Hunnam,38, who has spent most of his life in the United States, said the story addresses the consequences of older warriors ageing out of the military.

“We explore the difficulty of reintegrating into civilian life when your specific, central purpose and training is no longer deemed valuable or useful when you’re still in the prime of your life,” he said.

Affleck called the film “a parable about greed and temptation”.

“It’s not a very long leap to take what happens in the plot of this story and to allow it to help you look at the ways in which we’ve tried to solve problems in the military dimension and with money, and the futility of it. The real solutions are much more painstaking.”

Triple Frontier will be released on Netflix on Wednesday (March 13).