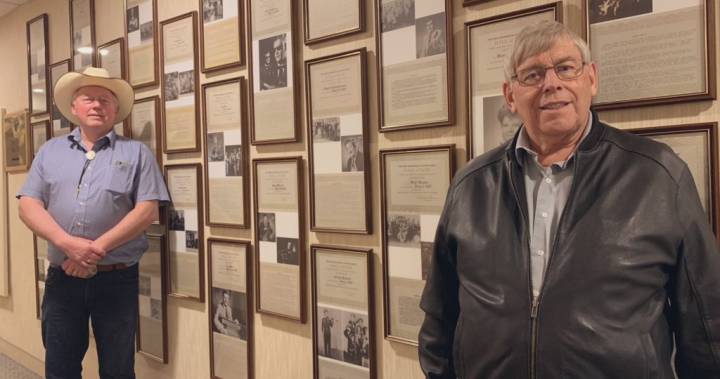 The New Brunswick Country Music Hall of Fame has been resurrected from the vault in the Victoria Health Centre to the halls of the Fredericton Inn.

“There’s a lot of great talent in this province and this is one way to show what they have done,” said Ivan Hicks, president of the New Brunswick Country Music Hall of Fame.

There are 181 inductees right now, which includes musician Aubrey Hanson of Fredericton and singer Dwane Drost, and according to the hall of fame, they induct five people every year.

“We have room for expansion here,” said Dwane Drost, who works at the NB Country Music Hall of Fame.

But due to COVID-19 the 2020 induction will be postponed to 2021, and with tour dates being cancelled up and coming artists that want a spot in the hall of fame, are finding new ways to connect with fans.

“I’ve been touring for 15 years. We’re not really sure how long it’s going to last so people are trying to figure out how to monetize what they are doing live on the internet,” said David Myles, a musician.

Somewhere between country and jazz is artist David Myles who is gearing up for an interactive online listening party for his new album.

“I’ll play some of the tracks from the record, I’ll talk about how they were made and I’ll interview some band members and talk to the fans,” said Myles.

“We always had comedy routines within the group and of course Vivian and I would sit down and play a few tunes for the audience as well, so it was a different kind of show,” said Hicks.

To get into the hall of fame, you don’t have to be a singer or performer, it’s all about the contribution to country music in the province.

“I’ve been in radio for 28 years, promoting country music through on air interviews and promoting shows,” said Brent Buchanan, who is one of the inductees.

The new hall of fame hopes to draw a larger crowd with its new home uptown. It will be open 24/7 and free of charge.

“It’s been my dream to get it a little more exposure and carry on Aubrey’s dream, I’m super excited to have this new location and just to be on the same wall with these artists…it’s amazing,” said Drost.