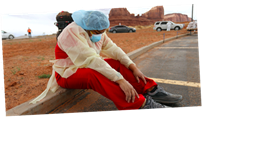 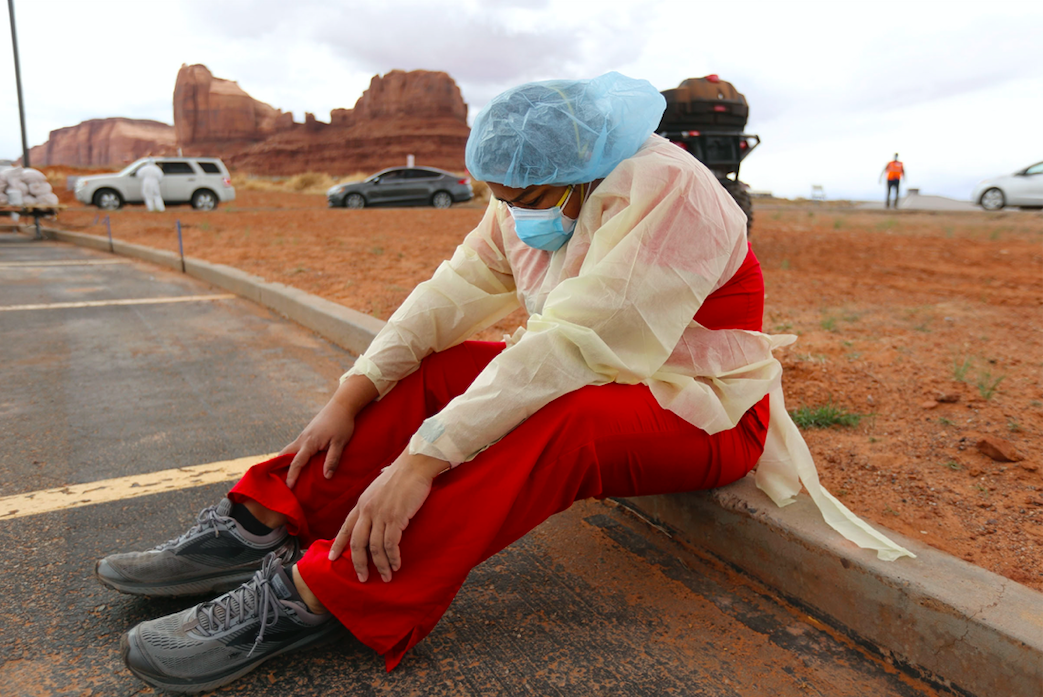 Vehicles line up for COVID-19 testing outside of the Monument Valley Health Center in Oljato-Monument Valley, San Juan County, on April 17, 2020.

BuzzFeed News has reporters across five continents bringing you trustworthy stories about the impact of the coronavirus. To help keep this news free, become a member and sign up for our newsletter, Outbreak Today.

WASHINGTON — Dozens of Native American tribal governments have raced to court in the past week to try to stop the Treasury Department from allowing for-profit Native corporations to access a special pool of $8 billion in federal coronavirus relief money.

The tribes argue that if Alaska Native Corporations, or ANCs, are eligible for the funds, it could cost federally recognized tribal governments potentially millions of dollars in aid. In court papers, the tribal governments said they needed the money to provide immediate relief to communities hit by the pandemic, including buying protective equipment, expanding testing for COVID-19 (the disease caused by the novel coronavirus), and delivering meals to the elderly and children.

“COVID-19 is causing devastating harm in Indian country,” lawyers for one group of tribal governments wrote in one of three lawsuits filed in the past week. “By way of just a few examples, as of April 15, 2020, the Navajo Nation alone has reported 921 cases and 38 deaths related to COVID-19. The Pueblo of Zuni has reported 33 cases. And the Cherokee Nation has reported 28 cases with one fatality as of April 9. Native Americans suffer from disproportionately high rates of diabetes, cancer, heart disease, asthma, which subject them to greater risk of fatal complications from COVID-19.”

As part of the Coronavirus Aid, Relief, and Economic Security Act (CARES Act) that became law in late March, Congress designated $8 billion in funding for “Tribal governments.” What exactly qualifies as a “tribal government” is at the heart of the legal fight that’s quickly bubbled up in federal district court in Washington, DC.

ANCs were established by a 1971 law governing how Alaska Natives manage and benefit from their land. In court papers, one ANC argued that these corporations are in a position to help tribe members during the pandemic, too, and that their for-profit status shouldn’t get in the way of accessing stimulus funds. The ANCs and the Treasury Department argue Congress used language in the stimulus package that allowed these corporations, which serve as holding companies for a variety of business interests, to apply for the money.

US District Judge Amit Mehta heard arguments on Friday via video and telephone. The tribal governments that sued want the judge to issue an immediate order to stop money from going to the corporations. Justice Department lawyer Jason Lynch told Mehta that the Treasury Department would hold off distributing the money until at least April 28. Mehta said he’d rule by April 27.

There are 574 federally recognized tribal governments that have a government-to-government relationship with the United States, and 237 ANCs throughout Alaska, according to court filings. The ANCs have shareholders — primarily members of Native American tribes — and boards of directors, and serve as holding companies for businesses that range from construction and pipeline maintenance to janitorial and food services.

The tribal governments argue that allowing the ANCs to apply for coronavirus relief money could reduce the amount potentially available to all of the tribes. They offered two hypothetical scenarios in court papers: If the money were divided equally among 811 entities instead of 574, it would mean the tribal governments would get approximately $10 million instead of $14 million. And if the money were divided up proportionally based on a combination of factors that included land, they said, the ANCs would disproportionately benefit given the millions of acres that they cover across Alaska.

The tribal government said in court papers that the money they’d normally get from businesses that operate on tribal lands and fund healthcare, law enforcement, and other services for tribal members had “evaporated overnight” due to the pandemic.

The Treasury Department contends that the language of the CARES Act didn’t exclude ANCs from being eligible for the money, and that the court should not second guess the executive branch’s “time-pressed determination” about how to distribute the funds. Congress used a definition of “Indian tribe” in the CARES Act from another law, the Indian Self-Determination and Education Assistance Act, which covers ANCs, and the Treasury Department is arguing that a board of directors is a type of governing body.

Mehta also questioned why Congress used a definition of “Indian tribe” that included ANCs if it meant to exclude the corporations from the stimulus money. Kanji said it was Congress’ “habit” and “pattern” to use that definition when legislating issues related to Native American affairs.

According to Lynch, the Treasury Department is still deciding how to divide up the money. Mehta asked if he knew the agency’s algorithm or methodology. Lynch said he didn’t, and even if he did, he wouldn’t be able to share it because it was part of the non-public “predecisional” process.

A lawyer for one of the ANCs that filed a friend-of-court, or amicus, brief asked Mehta for time to argue at the end of the hearing, saying there had been “misinformation” about ANCs that she wanted to address. Mehta denied the request, saying he wasn’t giving argument time to any of the groups that filed briefs but weren’t part of the lawsuit.

If you’re someone who is seeing the impact of the coronavirus firsthand, we’d like to hear from you. Reach out to us via one of our tip line channels.