The persistent and liberating message in Nari Ward’s sculpture and room-size installations is that art can be made from virtually anything. In his midcareer retrospective at the New Museum, “We the People,” this means old carpets, plastic bags, bottles, zippers, bed springs, keys and furniture. Hundreds of fold-up baby strollers take up a gallery in “Amazing Grace” (1993), while a canopy of yarn, rope and other found materials are used to create “Hunger Cradle” (1996). “We the People” (2011), nodding to the preamble of the United States Constitution, has that title spelled out in colored shoelaces embedded in a wall.

Using found materials to make art is a radical, if decades-old, tactic. In the late 1950s, the artist Allan Kaprow predicted that artists would use everyday objects, including chairs, food, electric and neon lights, old socks and billboards. Many of these items appear in Mr. Ward’s show. And although Mr. Ward came up through the art system — he was a fellow at the American Academy in Rome and shows regularly in New York galleries and global biennials — his work also resembles folk art and relates to specific locations, documents and histories.

“We the People” reminds you of street memorials with shoes thrown over tree branches or telephone wires. But who is the “we” in this work? It might apply to everyone covered under the Constitution, since these words come from its preamble — except that we know, historically, that the Constitution hasn’t been applied similarly or equally to people of the African diaspora, like Mr. Ward, who was born in Jamaica and moved to the United States when he was 12. 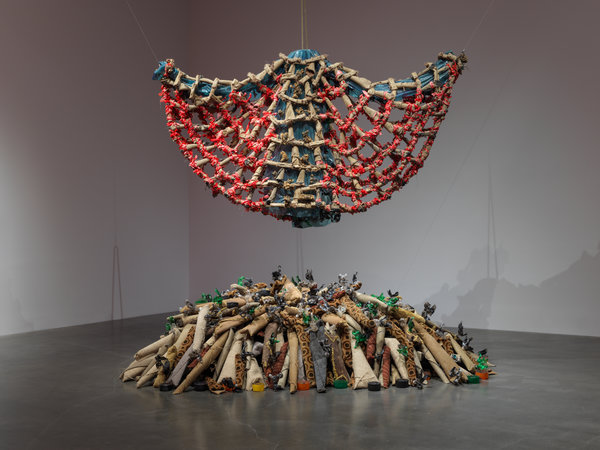 “Amazing Grace” also echoes street art with its room-size installation of baby strollers arranged so that you walk around them on a carpet of fire hoses, in a space lit like a church or mausoleum. Mr. Ward found all the abandoned strollers for this work on the streets of Harlem in the early 1990s, at the height of the AIDS crisis and a drug epidemic that disproportionately affected residents there.

Mr. Ward’s art practice also harks back to the found-object aesthetic of Robert Rauschenberg, or Californians like John Outterbridge or Noah Purifoy, who tied his junk (or “funk”) practice to the Watts rebellion of 1965.

Mr. Ward also adds a newer element in the mass of objects he assembles, which amount to a contemporary version of the sublime, in which you are awed and overwhelmed by the magnitude of stuff gathered in one place. Our ancestors might have experienced something similar, standing on the savanna or the tundra, watching tens of thousands of migrating animals pass before them. Now we are awed by the amount of consumer objects in existence, plastic in the ocean, or the vastness of landfills.

The downside is that this aesthetic has become very familiar — a global trademark employed by artists from Beijing to Berlin and used to relate to a history, a culture, an event or an atrocity. (Ai Weiwei has used this motif so much until it barely registers anymore.) Moreover, we’re experiencing the baby strollers in “Amazing Grace” at both a historical remove and in a very different site from their original location: an abandoned firehouse in Harlem in the early ’90s. Installation work gains — as Kara Walker’s sugar sphinx a few years ago showed — from its site; some of that is lost in the museum setting. It’s not just site or contemporary historical amnesia but also the exhaustion of a process — too much of a good thing and particularly when it’s triggered by the existential crisis of too-much-ness.

I would love to enter another site-specific work like “Amazing Grace” by Mr. Ward. At the New Museum, however, I spent more time with his smaller sculptures, which is where his materials sing. “Trophy” (1993) is a singular baby stroller caked with objects, including sugar and Tropical Fantasy soda pop that function as a gross-out nod to excess — but perhaps a millennial ode to the sugar trade that required bodies and labor and drove the slave trade for centuries. “Savior” (1996) is a shopping cart turned into a tower, like an ad hoc watchtower or minaret or a homage to the homeless who carry their life’s possessions with them.

“Glory” (2004) is an oil barrel turned into a tanning bed with fluorescent lights — a dazzling and deadpan comment on oil’s links to everything from luxury to melanin and the fossil fuel industry in Africa — and “Spellbound” (2015) is a piano covered with used keys, separated from their locations and purposes, and a video that includes footage of a church in Savannah, Ga., that had breathing holes in its floorboards for escaped slaves hiding there.

One of the works I lingered over longest is also among the simplest. “Den” (1999) is a log that came from a tree growing through a chain-link fence sitting on a faded carpet runner. Attached to the log are the carved wooden feet — or paws, technically, since they mimic those of a lion or panther — from a piece of furniture. Mixing nature and culture, wood from the urban wild and “civilized” furniture, the object is arresting and disturbing, a brilliantly simple and subversive gesture.

There is much more in “We the People”: altered photographs, videos, more installations and immersive environments that relate pointedly and poignantly to the history of black Americans and Harlem in particular. Mr. Ward is best as a sculptor, though, one who reminds us that our world is filled with potentially magical objects. We enter museums expecting to be transformed, but if we shift our perspective, look around us, we’ll see that everyday life is really just art waiting to happen.

Nari Ward: We the People 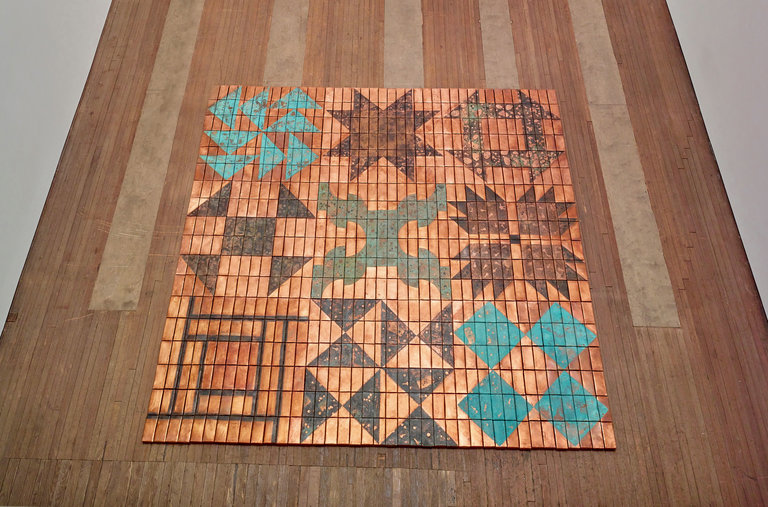 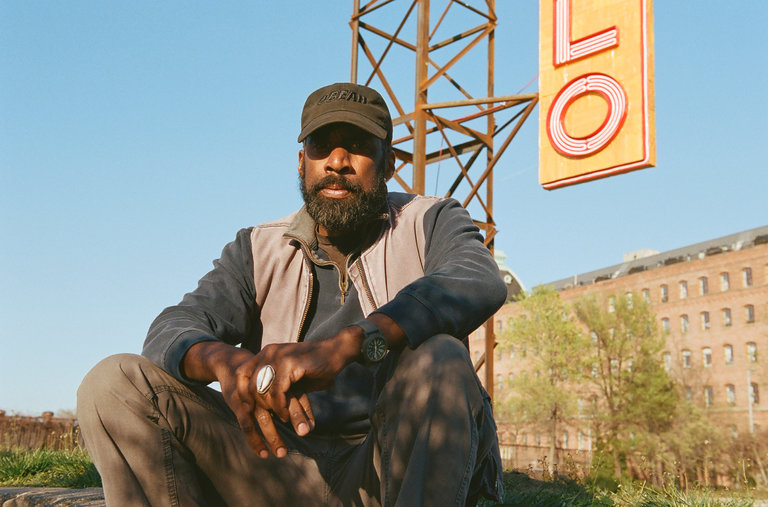