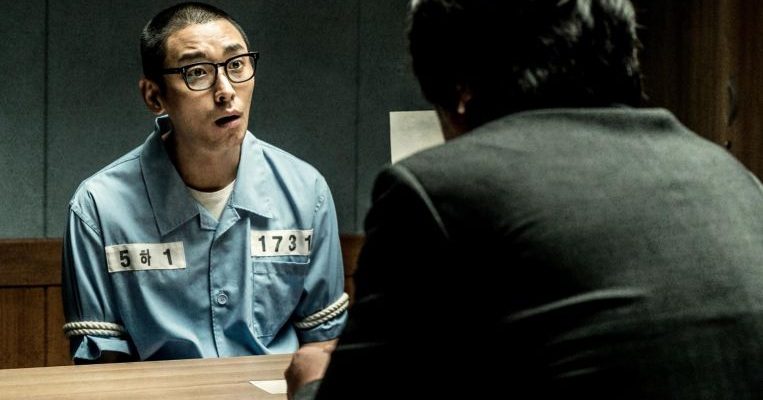 The story: Kang Tae-oh (Ju Ji-hoon) is a drifter serving time for one murder. While in prison, he confesses to be a serial killer, with corpses scattered around the city and beyond. Police detective Kim Hyung-min (Kim Yoon-seok) interviews Kang, but cannot tell if he is a fantasist, or a real multiple murderer playing a game with a goal Kim has yet to discern. Inspired by a true story.

The film’s English title is a play on words: The “dark figure of crime” is the name given by scholars to the number of crimes that go unreported, or are never discovered. It also refers to Kang, a man who, if he is telling the truth, would lower that dark figure, and increase the number of solved cases.

This is a crime mystery with a cleverly unconventional set-up: The bad guy has been caught, but the good guy has to play a mental chess game with him to find out where more bodies are buried. The cop needs to discover why the convict is offering the information, as his already long jail term could be lengthened to life imprisonment.

Some hallmarks of those films are here in Dark Figure: The brooding, haunted figure of detective Kim, a man whose personal demons drive him to seek closure for the families of victims when other cops tell him he is wasting what is left of his career; and Kang, an archetypal villain in that he is an unreliable narrator, an insecure egomaniac with a need to boast, but who possesses enough of a sense of self-preservation to obscure identifying details. Korean society is shown to care little for those at the bottom rung; they are just statistics to the police.

The story sets up Kim and Kang as a duality, but takes only the point of view of the detective as he scours cold cases alluded to by Kang, while laying verbal traps for him in their prison interviews.

Both actors handle their roles wonderfully. Kim Yoon-seok’s eyes flicker with intelligence underneath a world-weary face while Ju’s killer Kang is a compelling mix of bravado, menace and psychotic rage.

But that is where the similarity to the best in Korean crime drama ends. The procedural part of the story resolves itself suddenly and conveniently at the 11th hour, rather than delivering what the narrative seemed to promise: the payoff from a cleverly laid mental trap.

This was probably driven by a need to tie up every loose end, which is a pity.

Watch the trailer at www.youtube.com/watch?v=vz3wTvzC1vY