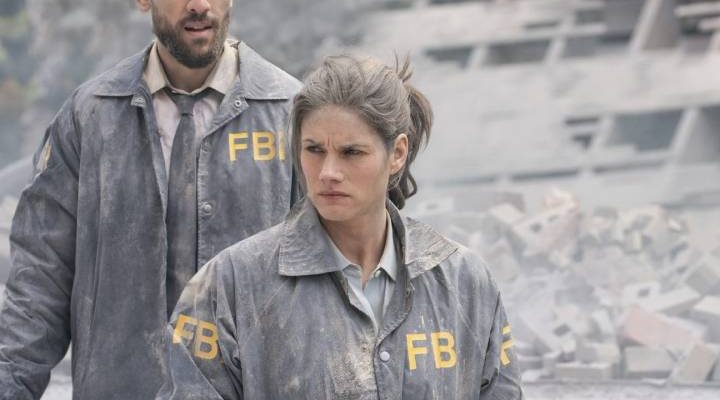 The name Dick Wolf is synonymous with addictive, gritty programs, and his long-running franchise Law & Order is exemplary proof that the man understands how to craft a TV show.

By casting Canadian Missy Peregrym and Egyptian-born Zeeko Zaki as the co-leads of new series FBI, Wolf seems to have struck gold again. Peregrym and Zaki, over the course of 10 episodes in Season 1’s first half, have managed to develop undeniable chemistry.

As FBI special agents Maggie Bell and O.A. Zidan, the pair take on intense problems and situations for work, all while having each other’s backs in their personal lives. Global News caught up with the pair in New York City, and that on-screen chemistry translates into real life — both actors have nothing but great things to say about one another.

So what has it been like shooting the first half of FBI‘s inaugural season? Here are five things to know before heading into the second part of FBI.

Zaki’s role is the first-ever Arab-American lead on network TV.

Zaki’s existing character, O.A., is Arab-American and Muslim, but he was initially supposed to be an undercover agent from South America. When Zaki arrived at the FBI audition, the room was filled with recognizable Latino actors, but he still felt confident.

“I felt lucky because I had a Tarot card reading the night before,” he said. “Literally the first card was ‘something big is going to happen!’” [Laughs]

Wolf himself made the decision to switch to a Muslim character, perhaps sensing the chance to do something different on network TV.

“It was overwhelming and a massive dream come true,” Zaki said. “Dick and the rest of the whole team took a risk to put an Arab-American as a lead on a network show. What we’re trying to show is it shouldn’t be a risk at all. It was exciting, though, because I knew we had such an opportunity.”

Peregrym is ecstatic to be where she is in her career.

Of course, Peregrym played rookie cop Andy McDowell on successful police drama Rookie Blue for six seasons, so she has a familiarity with procedurals and FBI‘s subject matter. It’s inevitable that her experience on Rookie Blue would bleed (no pun intended) into her current role.

Sometimes Peregrym thinks in her mind: “It’s like Andy McDowell got a promotion. A big one!”

At first, she says, she was annoyed that she thought that way, but now she embraces it. Why not allow Andy to inform her performance now?

“Weirdly enough, it’s been pretty seamless,” Peregrym said. “Maggie was a cop for six years, and I played a cop for six years on a show, so some of the dynamics were already there. I said I was never going to do another procedural, but then sometimes I’ll find myself on set and think to myself, ‘This is exactly what I want to be doing.’ I’m not really the fluffy person. I like to get down into it. I don’t like BS.”

It’s very difficult to turn off the intensity when the shooting day is done.

Both leads have immense respect for real FBI agents, and both struggle with completely signing off when shooting is done.

“I’m still working on that,” Zaki said. “We’ve been going 60 to 80 hours a week, five or six days [a week]. On that time off, you have to find something that pulls you out. It’s a little tricky, because you live for eight days in a sex-trafficking world where you’re in dark basements and you see all these things. Or you’re staring at a guy who’s had his heart ripped out. You’re just like, ‘Show me how that is not real!’”

“You just want to go out with your friends, and you’re like ‘Why do I feel weird?’”

“It’s a lot. It’s scary,” Peregrym said. “It’s another reason why I didn’t want to do this type of show. It’s threatening to me, these storylines are things that could happen to any one of us. We read about it on the news already, it’s not like we’re making it up. We’re doing stuff that is real.”

Of course, Maggie’s character has a lot of darkness in her background, so she doesn’t just deal solely with FBI-related work stress. It’s a challenge, said Peregrym, tears welling up. She feels like that dissonance and stress really informs her character.

“I don’t believe in superheroes,” Peregrym said. “I believe in people who are scared to death and brave enough to step forward and do the hard thing. Those are the people who I really respect.”

“I want to show myself not being able to keep it together,” she continued, managing to hold back her tears — a feat she says she does frequently on-set. “The point is: that’s people. You can’t just watch a kid die … a kid that got blown up because you told the mom not to go in the building. You can’t separate all the time.”

Peregrym and Zaki are a perfect match.

Peregrym’s years of experience on Rookie Blue allow her to impart knowledge and help guide Zaki, and he couldn’t do it without her.

“Missy has a lot of experience in film and television, and I’m new to it; she has experience with the FBI, and I’m new to it; this concept of 80 hours a week, too. She is amazing. She’s helped me tremendously. I couldn’t even do half of this without her. I’ve never met anybody more passionate and focused … even when it’s a three-second scene.”

Still, she doesn’t want to hold his hand all the time.

“It’s a tricky thing, because that’s his journey,” said Peregrym about giving Zaki advice. “We definitely have a friendship and we have conversations, but you only get the first thing one time. I don’t want to be like, ‘This is what it has to be, and this and this and this.’ That’s a really special moment to have, and he gets really excited about stuff, but I’m like, ‘Meh.’ He’s like, ‘Oh my god! The billboards! The ratings!’ I’m like, ‘Eh.’ [Laughs] I learned through experience, and he should have the opportunity to do the same thing.”

Romance between their characters doesn’t appear to be on the horizon.

Maggie and O.A. shippers, you might need to take a seat for a while.

“We’re like brother and sister, 100 per cent,” laughed Peregrym.

“It’s funny, everyone that’s not there for the entire ride wants [the romance],” said Zaki with a grin. “A new director will come in and be like, ‘Maybe you guys are flirting in this scene?’ We’re always like, ‘No.’ I don’t know how Dick works in that realm. Right now, we’re definitely not, and you’ll see that in the upcoming episodes we’re establishing different things. But there are some moments coming up that Twitter is going to love.”