In the words of its playwright, Ming Peiffer, “Usual Girls” is a show about “the joys and horrors of growing up being a woman — the extreme joys and the extreme horrors.” And the play, which had its final performance on Sunday, is almost perfectly tailored for this moment.

It follows a half-Korean, half-white girl in 1980s Ohio into adulthood, frankly tackling issues of race, sexuality and rape along the way. Ms. Peiffer said that the show went into rehearsals just as Christine Blasey Ford publicly accused the Supreme Court nominee Brett M. Kavanaugh of sexual assault, the culmination of a year of #MeToo allegations.

That is a charmed reception for a young writer getting her first professional production. In an interview on the cusp of the final performance, Ms. Peiffer, 30, reflected on the ride. These are edited excerpts from the conversation.

How often did you end up seeing the show?

I watched it all through previews — I was making many changes — so I saw it for about a month straight. Which is a lot. It’s a very, very personal story, and a very triggering story, so it was a lot to see that. I’ve pretty much come back every week since — if I can get a seat to my own show! It’s a good problem to have.

This is not a play that tries to make the audience comfortable. Could you feel that in the theater?

What surprised you about responses to the production?

The predominant reaction to this play is complete strangers coming up to me and telling me extremely, extremely personal things about themselves. We had a student matinee the other day with high school arts students, and three of the students there, two women and a young man, during the talkback shared that they really related specifically to this final scene — a scene where there’s the aftermath of a rape happening. 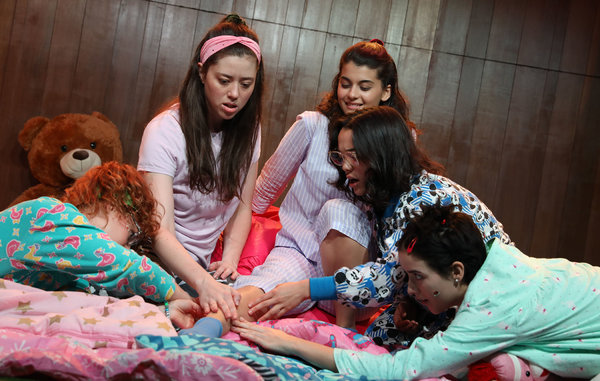 Another thing that surprised me — but I guess upon further reflection, doesn’t completely surprise me — is the amount of older women who have come to me and said: “You know, we grew up in different times, the specifics are different, there are some references I didn’t necessarily get. But the thing that struck me the most about your play is how little has changed.”

Last night was our benefit performance. So among an audience that was mostly white — and you know, obviously, donors — an older audience. I saw out of the corner of my eye there was this half-Asian, very young woman who didn’t seem to be a donor to me. She came up to me after the show with tears in her eyes and told me she found out about the show late, the only seats that were left were for the benefit, so she spent $250 as a Christmas present to herself to see this show. She was just getting super emotional and apologizing for it. I kept saying: “Don’t apologize. Do not apologize.” Because so much of the Asian experience is internalizing and not feeling like your emotions are valid, not feeling like the experiences you go through are valid, not feeling like the racism you experience is real.

[Sign up for Theater Update, a weekly email of news and features.]

I understand your father used to wake you up in the middle of the night to read his writing.

My father wanted to be poet and was a very creative person, and because of various things — his mental disease, his alcoholism, his drug addiction — never became what he set out to be. And so, yeah, he used to come home from the bar coked out of his mind and would wake me up at the age of 5 and have me read drafts of his poetry. Even though my relationship with my father was very dysfunctional, I’ve now grown to a point in my life where I have empathy for him, even though he wasn’t a great person. And I think that makes me a much better dramatist.

Did your parents see the show?

I’m no longer in contact with my father, but my mother did. It was a very emotional experience for her, and actually the actor who plays my father, when he came up afterward — he really wanted to meet my mom because he’s the nicest guy ever — but when he came up to meet my mom, my mom literally flinched and kind of couldn’t even look him in the eye. It was pretty intense. But then when I was back for Thanksgiving, we were able to have some conversations about things, and I could tell she was proud.

What has “Usual Girls” led to professionally?

The development deal I have at FX that’s sort of inspired by my life, and has influences of the play, but isn’t directly the play. Following a young half-Asian woman as she’s navigating sex and relationships in her life, dealing with this father who is a drug addict and believes he was experimented on by the government, and also dealing with her mother who has now converted to Judaism, living in a Jewish household. This very wacky intersectional family in Columbus, Ohio.

What are your plans for the week after the show?

Cry! Cry and then emotionally eat!

Anything else you want to say about the experience?

Give these supposedly risky plays a chance.