Miguel Algarín, a poet who was the driving force behind the Nuyorican Poets Cafe, a performance space on the Lower East Side of Manhattan that since 1973 has played host to poetry readings, plays and more by Puerto Rican and other artists who have had trouble being heard in the mainstream, died on Monday in Manhattan. He was 79.

His nephew John Howard-Algarín, a municipal judge in New York City, said the apparent cause of death, in a hospital, was sepsis.

Mr. Algarín, who was born in Puerto Rico but lived most of his life in New York, had a keen sense of the dual identity felt by many people with a similar story. He had an equally keen ear for the language of the street and the power of poetry performed live. He was a foundational figure in the Nuyorican literary movement, which encompassed writers and other artists born in Puerto Rico or of Puerto Rican descent but living in New York, whose works often explored their identity and their marginalization.

In the early 1970s his flat on East Sixth Street became a gathering spot for similarly minded writers, and in 1973 things came to a head.

“The gang of poets that he gathered around him were hanging out at his apartment when he said, ‘There are too many of us in here; let’s go over to that Irish bar across the street,’” his friend Bob Holman, who helped Mr. Algarín revive the cafe in the late 1980s after a period of dormancy, said in a phone interview. “That was the beginning of the Nuyorican Poets Cafe.”

The cafe caught on, and the performances there grew to encompass theater, poetry slams and more, with an emphasis on writers of color and other marginalized groups. Books were published. A theater festival was created. All of it sought to break the bonds that Mr. Algarín felt the arts world, society and language itself placed on such performers and writers.

“When a people are oppressed,” he wrote in the introduction to “Action: The Nuyorican Poets Café Theater Festival,” a 1997 collection compiled by Mr. Algarín and one of the cafe’s other founding poets, Lois Elaine Griffith, “the only way to hold their cultural space is to start talking.”

His own prose and poetry — he published a number of collections — was part of that conversation. There was, for instance, “Survival,” from 1978:

Miguel Algarín was born on Sept. 11, 1941, in the Santurce neighborhood of San Juan. When he was 9 the family moved to New York, where his father, also named Miguel, was a doorman and his mother, María Socorro Algarín, was a dietitian at Goldwater Memorial Hospital.

Mr. Algarín received a bachelor’s degree at the University of Wisconsin in 1963 and a master’s degree in English literature at Pennsylvania State University in 1965. He then settled in New York. He taught Shakespeare, creative writing and United States ethnic literature at Rutgers University in New Jersey for more than 30 years and at his death was an emeritus professor there.

But he was just as comfortable on the streets of the pre-gentrification Lower East Side as he was in the university classroom, as Ishmael Reed noted in his introduction to Mr. Algarín’s 1997 collection, “Love Is Hard Work: Memorias de Loisaida.”

“The poetry is as sophisticated as the author,” Mr. Reed wrote, “who is capable of leading a theater audience in a discussion of the links between William Shakespeare and Adrienne Kennedy and of ordering in French at a New Orleans restaurant. He is a professor who nevertheless hasn’t lost the common touch.”

In 1975 Mr. Algarín and Miguel Piñero, another founding poet of the cafe, published “Nuyorican Poetry: An Anthology of Puerto Rican Words and Feelings.” It included an introductory essay by Mr. Algarín that became something of a foundational document for the Nuyorican literary movement.

“The poems in this anthology document the conditions of survival: many roaches, many busts, many drug poems, many hate poems — many, many poems of complaints,” he wrote. “But the complaints are delivered in a new rhythm. It is a bomba rhythm" — a music and dance form from Puerto Rico — “with many changing pitches delivered with a bold stress. The pitches vary, but the stress is always bomba and the vocabulary is English and Spanish mixed into a new language.” 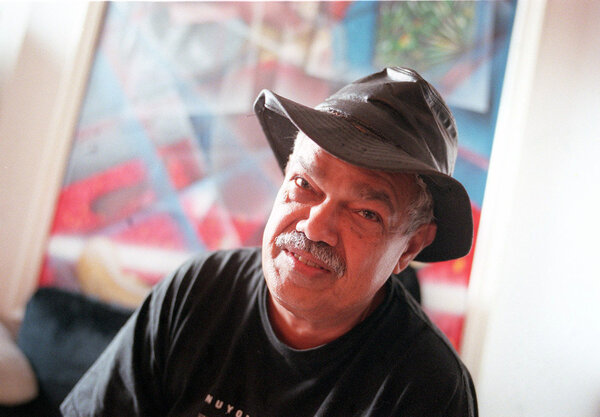 In the 1980s the cafe moved to East Third Street, where it remains today. Over the years the variety of voices coming from its stage expanded, as did the forms — its poetry slams were lively affairs — and by 1995 Mr. Algarín was able to reflect on the role the cafe had played in broadening New York’s arts offerings.

“The poets of the Cafe have gone a long way toward changing the so-called black/white dialogue that has been the breeding ground for social, cultural and political conflict in the United States,” he wrote in the introduction to “Aloud: Voices From the Nuyorican Poets Cafe,” a 1994 compilation he edited with Mr. Holman. “It is clear that we now are entering a new era, where the dialogue is multiethnic and necessitates a larger field of verbal action to explain the cultural and political reality of North America.”

Mr. Algarín is survived by a brother, Arturo; a sister, Irma Antonia Algarín; and several nieces and nephews.

In a 1976 interview with The New York Times, Mr. Algarín talked about what attracted audiences and performers to the Nuyorican Poets Cafe. They were drawn, he said, “by the sense of not having to let go in order to survive; we are not forced to drop our language in some sort of search for American citizenship.”