HOUSTON — Talk with any bunch of art professionals about recently built museums and you’re likely to hear kvetch, kvetch, kvetch followed by an admiring reference to the Menil Collection. The Menil is widely regarded as the gold standard in institutional concept and design. And admiration for it tends to shade into devotion. Its 30-acre campus of low-slung buildings in a leafy park in this city has become as much pilgrimage site as cultural destination. Now, with the addition of a building for the Menil Drawing Institute, there’s more perfection than ever to love.

I’m a devotee too, though one with reservations, none of which prevented me from taking delight in the Drawing Institute’s new quarters, and in its extraordinary inaugural show, “The Condition of Being Here: Drawings by Jasper Johns.” The 30,000-square-foot building, advertised as the country’s first free-standing facility dedicated to the conservation and study of modern and contemporary drawing, is surrounded by four other Menil buildings, with the famed Rothko Chapel a short walk away.

And there’s something distinctly, if ecumenically, chapel-like about the new $40 million structure that opened in early November. As designed by the Los Angeles architects Sharon Johnston and Mark Lee in collaboration with landscape architects Michael Van Valkenburgh Associates, its roof is flat but here and there rises in aspirational peaks. With white walls and contoured ceilings that look like creased paper and three spare enclosed gardens, it brings to mind a Shinto shrine, one of the simpler rural kinds of no-nonsense elegance, buildings that seem to both stand apart from and be open to nature. 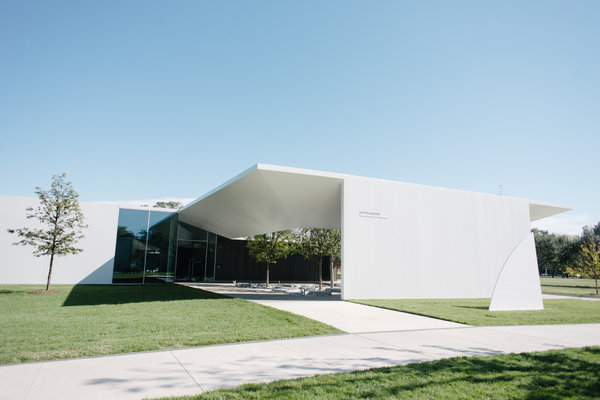 Practicality was a determining feature in the design of such places, and it was for the Drawing Institute, founded by Menil’s curator emerita, Bernice Rose, in 2008. Drawings on paper are degradable things, sensitive to light, humidity, dust. They require controlled surroundings and that’s what they have here. In the building’s public spaces, where visitors gather, and in nook-like offices reserved for visiting scholars, there are windows onto the world, or at least onto manicured lawns. But in other, nonpublic areas, like the conference rooms where drawings are put out for study — windows are few and filtered, or absent altogether.

The most sealed-off space of all — no windows, no skylights — and where the public will spend most of its time is the exhibition gallery. Architecturally, it’s a letdown. A large rectangle with movable walls. It could be anywhere, designed by anyone. The rest of the building, despite its restraint, has all kinds of visual felicities. But in the gallery there are none. Foursquare walls, ceiling, floor, ceiling. It’s as if we’re being told: Concentrate. Look at the art. Nothing else matters.

Enforced discipline is a Menil trademark. (Most museums now seem to encourage precisely the opposite ethic.) Picture-taking is not permitted in Menil galleries — too distracting — but neither, apparently, is reading. In the museum’s main building, the permanent collection display is culturally wide-ranging: Greek classical heads, Byzantine icons, Luba ancestor figures, Japanese bodhisattvas, Tlingit masks. Identifying labels carry only the most bare-bones data. Of explanatory, contextualizing information, there is little or none. You’re left to make what you can of a thing and drift on.

An exception is a gallery of African art. All of the Menil’s permanent collection galleries were recently reinstalled, and this one was given a theme: the African-European colonial encounter. Everything in the room relates to it, notably multiple images of Africans depicted by Europeans, and Europeans depicted by Africans. It’s a fascinatingly eclectic ensemble and needs — certainly benefits from — some explaining, which visitors get in a handout written by the museum’s curator of collections, Paul R. Davis.

The Jasper Johns exhibition at the Drawing Institute also comes with a handout, written by Kelly Montana, an assistant curator there. And general and brief though it is, it’s a boon, because people need guidance with this enigmatic art. The Menil has a long history with Mr. Johns, having done two earlier exhibitions. And the current one coincides with the release of the museum’s six-volume catalogue raisonné of his drawings.

The show itself — organized by Ms. Montana when the original curator, David Breslin, moved to the Whitney Museum of American Art — begins where the catalogue raisonné does, in 1954, with a small untitled graphite drawing on oil-stained paper. And the enigmas begin here.

At a glance you see a solid black field of tightly drawn vertical graphite lines, with a fringe of stray line-ends at the bottom. Closer scrutiny reveals that the blackness is layered and textured, and the hand-action is not just up and down. It curves and twists across the field. And some of those curves form shapes: namely, two side-by-side spheres or balls that seem to lie at some depth behind the field. Suddenly you have a spatial dimension you didn’t know was there, and an image, and what a strange one. Abstract? Planetary? Sexual? Now you’re in the realm of meaning, and guesswork, and interpretation.

While you’re guessing, you might note that the spheres anticipate the target motifs that would become a Johns signature. The earliest example here is a graphite and gouache drawing called “Target With Four Faces,” double-dated 1958/1967; the latest is from 1977. From them you can intuit a temporal pattern in the artist’s career, a themes-and-variations rhythm, extending over years, in which particular motifs — targets, American flags, maps, stenciled numbers, skulls, body parts — recur with new themes periodically introduced.

The sheer range of media in the show’s 41 objects — graphite, watercolor, pastel, oil stick, ink on paper, ink on plastic, collage — is astonishing. So is his technical mastery of each, which has an allure of its own. The effect is to crack drawing, as an art category, wide open and fuse it with painting, sculpture, printmaking and poetry.

But it’s the mystery of Mr. Johns’s images that lock you in: those uncanny dark spheres from the 1954 piece; the skull imprinted on a paper towel in 1971; the body that looks to be drowning in “Study for Skin I” of 1962; the tilting still life of antique jars in “Study for Fall,” from 1986; the moldering stew of gangrenous hands and heads in “Farley Breaks Down,” from 2014.

These images feel deeply, privately coded and, depending on your mood, mesmerizing or maddening. In fact, they are almost all elements in an expressive pictorial language of symbols and metaphors that Mr. Johns has developed over a six-decade-and-counting career. Few artists want their work to be pinned down by “meaning.” He doesn’t. But it’s important for viewers, especially new ones, approaching a summing-up show like this one, to have at least the rudiments of that language translated, or some sense of the life and the world that produced it. But neither this show nor its slender catalog make an attempt to render this service.

I know it’s the Menil Collection’s house style not to accompany art with extended informational labels, but I miss them. They are the layer of learning that follows, and deepens, looking.

They are, or can be, a way to link art to the politics of everyday life, which is what produces art in the first place. John and Dominique de Menil understood politics. They are well known for having been liberal in their thinking and in their charitable giving. (Though mention is seldom made of the fact that their fortune derived primarily from the sale of drilling equipment to the oil industry, which contributes to environmental distress.) Whatever their history, the museum itself, to judge by its galleries, leaves the world, and its realities, outside the door.

I love the place anyway. I love churches — houses of contemplation, spiritual inquiry and ethical information — of almost every kind. Chapels, temples, shrines. I happen to like them buzzy and noisy, like subway cars, warmed by music and prayers and arguments, and visually charged, with images that stimulate and disturb. (Mr. Johns’s show fills that bill.) I love that some of them are about community, caretaking, protection, protest, and news of the day. And I also love, sometimes with misgivings, that others are set-aside places where improved, corrected versions of reality can be proposed, which, for me, describes the Menil.

The Condition of Being Here: Drawings by Jasper Johns
Through Jan. 27 at the Menil Drawing Institute, Houston; 713-525-9400, menil.org.