Meghan Markle added a special shoutout in the author bio for her forthcoming children’s book, called “The Bench.”

In a Penguin Random House release for the book, shared with HuffPost on Tuesday, the Duchess of Sussex mentions her two dogs (Guy and Pula), in addition to some new animal friends when describing her work and current life in California.

“Meghan, The Duchess of Sussex, is a mother, wife, feminist, and activist,” Meghan’s author bio says. “Through the nonprofit work of the Archewell Foundation, she and her husband are committed to activating compassion in communities across the world.”

The release adds, “She currently resides in her home state of California with her family, two dogs, and a growing flock of rescue chickens.”

Meghan, Harry and Archie’s coop for their rescue chickens recently made an appearance during the couple’s interview with Oprah Winfrey in March.

In the CBS primetime special footage, Meghan spoke about the family’s rescue chickens, while viewers got a look at the coop, aptly called “Archie’s Chick Inn, Established 2021.”

The duchess greeted the former factory-farm chickens with a “Hi girls!” in the footage and told Winfrey that she “loves rescuing.” 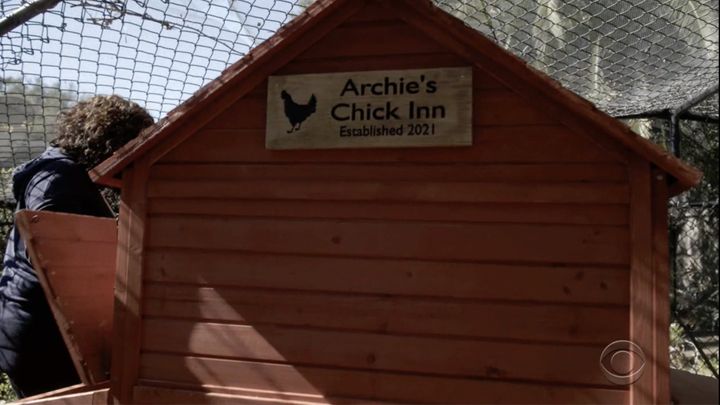 It’s unclear if the chickens will appear in Meghan’s children book, which features watercolors from award-winning author and illustrator Christian Robinson.

The duchess spoke about the “The Bench,” which was inspired by Prince Harry and Archie’s relationship, in a statement.

“The Bench started as a poem I wrote for my husband on Father’s Day, the month after Archie was born,” the royal said. “That poem became this story.”

She said that Robinson captured “the warmth, joy, and comfort of the relationship between fathers and sons from all walks of life,” in his illustrations, representation that she said “was particularly important to me.”

“Christian and I worked closely to depict this special bond through an inclusive lens,” Meghan added. “My hope is that The Bench resonates with every family, no matter the makeup, as much as it does with mine.”