Meghan Markle and Prince Harry’s Christmas card made its highly anticipated debut on Wednesday, much to the delight of royal fans everywhere.

“The original photo of the family was taken at their home earlier this month by The Duchess’s mother,” a spokesperson for the couple told HuffPost.

“The small Christmas tree, including the homemade ornaments and other decorations, were selected by Archie, and the tree will be replanted after the holidays.”

Last year, the couple ― who spent their holiday sabbatical in Canada instead of joining the royal family at Sandringham in England ― released their holiday card through the Queen’s Commonwealth Trust.

The 2019 digital card showed Meghan and Harry posing in front of a Christmas tree and smiling at baby Archie, clad in a cozy sweater. In his first-ever Christmas card, the little one was busy staring down the camera.

“Merry Christmas and a Happy New Year,” the sparkly electronic card read. “From our family to yours.”

Prince William and Kate Middleton shared their holiday card, which was leaked prior to its official release, last week.

The photo shows the Duke and Duchess of Cambridge posing on a hay bale alongside a monstrous stack of firewood and their three children: Prince George, 7, Princess Charlotte, 5, and little Prince Louis, 2.

Louis appears to be laughing at something very funny in the snapshot, which was taken this fall by photographer Matt Porteous at the family’s Anmer Hall house in Norfolk. The photo shows the two sitting on a bench in the sun, surrounded by flowers, in Birkhall, Scotland.

Though the royal family will not spend Christmas together as they normally do, or greet parishioners and locals on their way to the Christmas Day service at St Mary Magdalene church, one thing remains the same: the queen’s Christmas address.

The speech will air on BBC One at its usual time slot of 3 p.m. on Christmas Day, though there will be a technological twist. 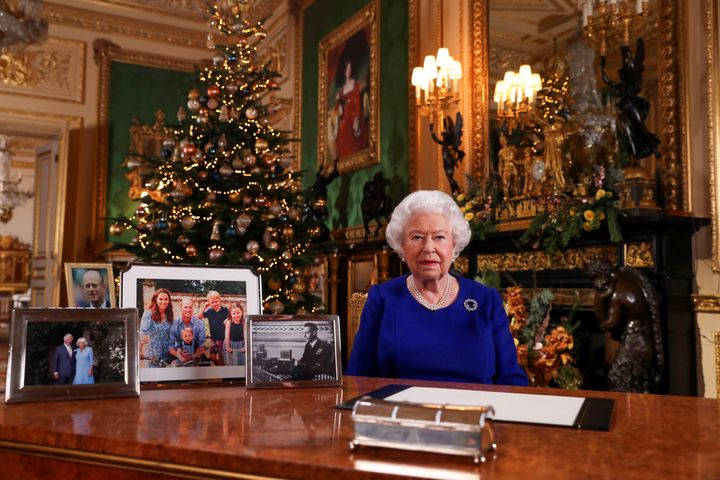 Amazon announced over the weekend that for the first time ever, users will be able to listen to the queen’s speech on Amazon Echo.

According to The Guardian, all one will have to say is: “Alexa, play the queen’s Christmas Day message.”