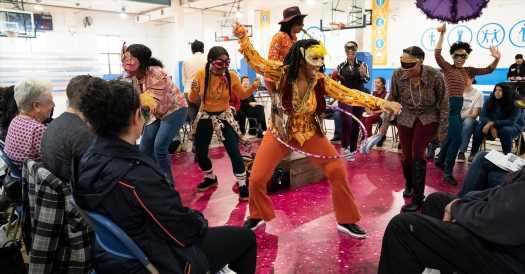 With their two productions this season, the folks at the Public Theater’s Mobile Unit, a touring company that offers free shows in communities all around New York City, have proved what they know how to do better than anyone else. It’s not creating a dynamic dialogue between the works onstage and the audience, although they’re wizards at it. It’s not making Shakespeare feel urgent and fresh by turning the plays on their head, although I can’t think of any other company that has made me want to sit through “The Tempest” twice.

Where they excel, in miraculous ways, is in finding solutions to the Bard’s “problem plays.” In “Measure for Measure,” running at the Shiva Theater through Dec. 8, they have taken the icky plot about a greedy Duke trying to coerce a novice into sleeping with him, and transposed it to recent history, creating a more believable frame for the play’s themes of amorality arising from hedonism.

The director LA Williams has set the action in New Orleans in 1979, on the Fat Tuesday when a police strike led authorities to threaten citizens with the cancellation of Mardi Gras. The mayor, the appropriately named Ernest Morial, asked people to stay home and sit this one out.

But of course he couldn’t stop the holiday, and although some parades were axed, the people flooded the streets to celebrate anyway.

It’s during this period of blissful anarchy that the Duke (Grace Porter), a symbol of law and order more than a character, decides to run an odd social experiment by putting New Orleans under the command of his deputy, Angelo (Adrian Kiser), a fairweather moralist. Disgusted by the debauchery, Angelo sentences the young Claudio (Lily Santiago) to death for impregnating his fiancée, Juliet (Nora Carroll), even though Angelo himself has no qualms when it comes to breaking off his own engagements. Where’s the fun in having power if you can’t exert it arbitrarily?

Indeed, Angelo is as libidinous as he is ruthless; when he meets Claudio’s sister, Isabella (Jasmine Batchelor), a young novice who begs him to have mercy on her brother, Angelo makes an indecent proposal: her virginity in exchange for Claudio’s life. Appalled by the idea of giving up her chastity, Isabella’s plea exposes not just the perverse value placed on a woman’s virginity but also the inhumane nature of the death sentence.

The ensemble, comprised entirely of actresses of color, creates an exciting dialogue with another work currently running at the Public, Ntozake Shange’s groundbreaking “For Colored Girls.” Both showcase the plight of women who must adhere to rules created by men who bend them according to their whims and desires.

And as if there were a Public Theater dramatic “universe,” this adaptation picks up where their summer production of “Much Ado About Nothing” left off, as a group of black women find themselves abandoned by men to whom they had just pledged their love. In “Measure for Measure,” it’s the women who are unfairly asked to fix the mess created by impulsive men.

Williams’s tight direction illuminates the ways in which joy and tragedy can both be disguised behind an edifice of humor. The director seamlessly moves between tones, aware that too harrowing a shift might topple the play back into “problem” territory.

These transitions evoke the feeling of being at Mardi Gras, where — inebriated by the dancing and the music as much as the booze — we might find ourselves completely ecstatic in one moment, and contemplating mortality the very next.

Most of the levity comes courtesy of Alfie Fuller, who, as Pompey, delivers clown-level antics and surprises by becoming a different character — to avert spoilers, the dual casting isn’t even mentioned in the program — with the swift move of a cape (the efficient, unfussy costumes are by Asa Benally). Fuller’s Pompey serves the role of jester, highlighting the social and gender inequalities underlying the plot.

Batchelor, whose expressive face recalls the oft-doomed heroines played by Lillian Gish, turns in an Isabella for the ages: a woman who, in trying to rescue her brother, wonders if she is being abandoned by her God.

Magaluf warning: We won't tolerate any bars trying to encourage boozy tourists this summer with or without Brits
Lifestyle News