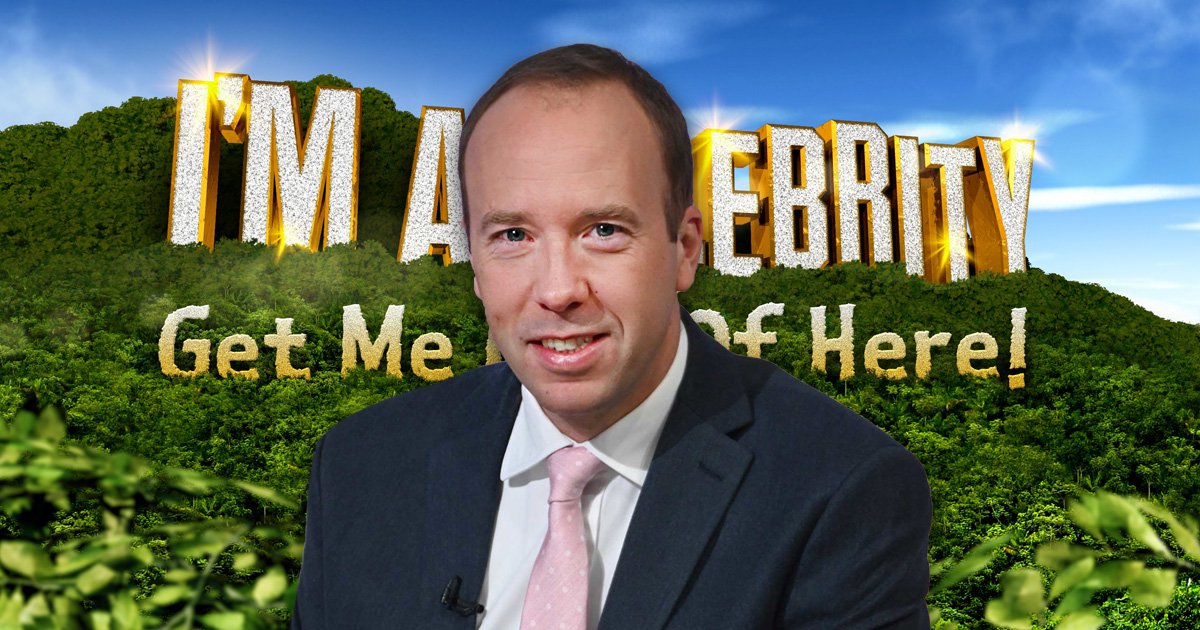 In what can only be bad news for the British public, Matt Hancock might be ruled out of doing some Bushtucker trials in I’m A Celebrity…Get Me Out Of Here, due to reportedly getting trench foot.

The former health minister sparked major outrage when it was announced that he would be heading to the jungle to take on the reality show, with bookies predicting that he would be, by far, the celeb voted for the most trials.

However, a source told The Sun: ‘When he was filming SAS Who Dares Wins in October, Matt got trench foot – in fact, a lot of the cast did. It can take up to six months to recover from that, so any water-based tasks or swimming trials would be bad news for his feet.’

Trench foot is a condition you can develop if you stand in a cold, wet environment for an extended period of time. Symptoms of trench foot include numbness, pain, redness and swelling.

It can be painful but often clears up in one to three days’ time. However, if symptoms are ignored, it can take months to go.

Mr Hancock has defended his choice to appear on I’m A Celebrity, saying he turned down the show twice over the summer, but now feels it’s the right time.

He confirmed reports that he has been given special permission to receive information on urgent constituency matters, and reiterated that he’ll be making a donation to St Nicholas Hospice in Suffolk and causes supporting dyslexia, and declaring the amount he receives from the show to Parliament.

He added to The Sun: ‘So, the truth is, I haven’t lost my marbles or had one too many pina coladas. It’s something I’ve given a lot of thought to. I was elected by the people, and it’s important to engage with voters, especially ­younger voters, no matter where they are, and show the human side of politicians.’

Mr Hancock is far from the first controversial figure to appear on the show, with the likes of Stanley Johnson and Nadine Dorries both previously heading to the jungle – however, Tory chiefs are furious at the decision and have moved to punish him.

Chief whip Simon Hart MP said: ‘Following a conversation with Matt Hancock, I have considered the situation and believe this is a matter serious enough to warrant suspension of the whip with immediate effect.’

In Mr Hancock’s constituency, Andy Drummond, deputy chairman (political) of West Suffolk Conservative Association, added: ‘I’m looking forward to him eating a kangaroo’s penis. Quote me. You can quote me that.’

‘Everybody knows what he did during the Covid pandemic and he seems to want to rehabilitate himself all the time in the public eye,’ Mr Houlder remarked.

Mr Hancock has already filmed SAS: Who Dares Wins, but the series won’t air until 2023.

I’m A Celebrity…Get Me Out Of Here begins on November 6 on ITV.