Lynn Kellogg Simpers, a singer and actress who, as Lynn Kellogg, played Sheila, the uptight debutante who turns into a free-spirited hippie in the original 1968 Broadway production of “Hair,” died on Thursday in St. Louis. She was 77.

The cause was Covid-19, according to Timothy Philen, her publicist.

Her husband, John Simpers, said she had been infected at a recent gathering in a large theater in Branson, Mo. Most of the people there were not wearing masks, he said. Ms. Kellogg Simpers had had a non-life-threatening form of leukemia that compromised her vascular system, he added. She died in a hospital.

“Hair,” the original counterculture musical created by James Rado and Gerome Ragni, ran for more than four years at the Biltmore Theater. It has always been an ensemble show, but Sheila is the closest thing it has to a female lead. Her big Act I ballad, “Easy to Be Hard” — “How can people be so heartless? … Especially people who care about strangers/Who care about evil and social injustice?” — comes in response to the casual rudeness of the character Berger (played by Mr. Ragni). Sheila is also one of the lead singers on the show’s finale, “Let the Sun Shine In.”

John Chapman, reviewing the show in The Daily News, did not care for the “tribal love-rock” music, but he liked the cast’s youthful energy. And he appreciated Sheila. “I did see at least one pretty girl, Lynn Kellogg,” he wrote, “and she sang a pretty song called ‘I Believe in Love.’”

The 1969 Tony Awards seemed to be biased in favor of mainstream Broadway productions, and therefore against “Hair,” but the cast’s performance of a medley of “Hair” numbers on the awards telecast impressed a lot of people, including the next celebrity to appear onstage, Zero Mostel. 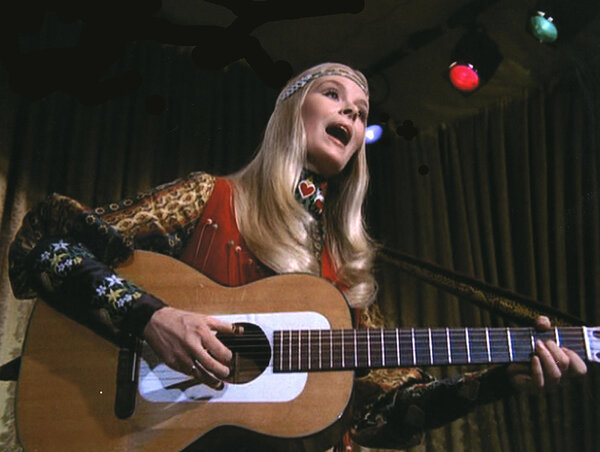 Lynn Jean Kellogg was born on April 2, 1943, in Appleton, Wisc., a Fox River Valley city north of Milwaukee. She was one of four children of Harry Burton Kellogg, a chemist, and Maxine (Goekes) Kellogg. Lynn attended the University of Wisconsin but dropped out after one year.

She made her television debut on the daytime drama “The Edge of Night” in 1964. She also appeared on episodes of “The Beverly Hillbillies” (as a bird watcher), “It Takes a Thief” and “Mission: Impossible” (as a folk-music performer singing Bob Dylan’s “The Times They Are a-Changin’” in an Eastern bloc country). She had a supporting role in Elvis Presley’s 1969 western “Charro!”

As a singer and guitarist, Ms. Kellogg entertained Vietnam War troops and toured with the folk musician Gordon Lightfoot. But she may be best remembered for her musical appearances on series like “The Johnny Cash Show.” On July 20, 1969, the same night American astronauts had landed on the moon, she wore bell bottoms and center-parted hippie hair in singing the nostalgic country song “When Papa Rolled His Own.”

Later, using her husband’s surname in addition to her own, she began developing children’s content for television and performing on those shows. “Animals, Animals, Animals” (1976-81), a Sunday morning series starring Hal Linden, won a Peabody Award and a Daytime Emmy for outstanding children’s informational series. Ms. Kellogg also worked in Christian programming.

In addition to her husband, whom she married in 1995, her survivors include a sister, Ede Kellogg Morris; two brothers, John and Harry Kellogg; a stepson, Justin Simpers; and a grandchild.