Shooting a Terrence Malick movie is never easy. Days are long. The director’s scripts can be mere suggestions. So by the time the Swedish musician and actress Lykke Li wrapped her scenes opposite Ryan Gosling in Malick’s wistful 2017 record-industry romance “Song to Song,” she needed a vacation. “Everyone was like, ‘Oh, you should go to Mexico City — it’s the best,’” she says. “I went on a whim and ended up at a house party. And then I met Yola.”

Yola is Yola Jimenez, a sprightly Mexico City local who’d inherited her grandfather’s Oaxacan mezcal farm — and who had brought along “batches and batches of her own mezcal,” Li says. She typically drank whiskey while on tour (her latest wraps on Nov. 10 in Stockholm). But the clear, smoky, agave-based spirit cast a spell on the singer, whose downbeat pop has a similarly witchy feel. “I had the craziest night in Mexico City and then just fell in love with mezcal, the city, Yola, everything,” she says.

Li slept for a few hours, woke up without a hangover — “I felt amazing” — then met her new friend for brunch at Contramar, chef Gabriela Cámara’s chic, all-day seafood restaurant. There she tried another first: aguachile, a heat-spiked fresh-fish ceviche. Her own shrimp aguachile recipe (below), which she and friends enjoy during her downtime at her home in Los Angeles, was inspired by that meal. And the accompanying cocktail is made with Yola mezcal, a commercially available bottling of the spirit Jimenez brought to that fateful party. Li and the stylist Gina Correll Aglietti are now partners in the distillery, which currently distributes throughout New York and California, and the drink itself lies somewhere between a fizzy margarita and health-spa cucumber water — “fresh and hydrating,” Li says, “so you can keep going for hours.” 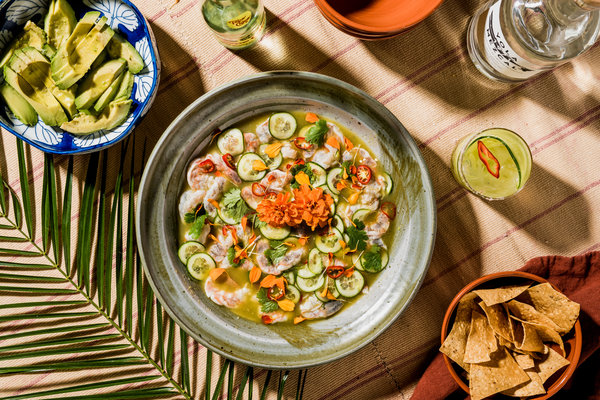 1. Roast tomatillos in oven at 400 degrees for 15 to 20 minutes or until blistering. Meanwhile, juice lemons and limes, saving one lime for garnish.

3. On a large platter lay out the shrimp (not overlapping) and pour the mixture over them. Refrigerate for about an hour.

4. Remove and add thinly sliced jalapeño and serrano, a drizzle of olive oil and flowers. Serve with lime.

¾ ounce Yola mezcal (or any variety you prefer)

2. Slice cucumber and muddle in the bottom of the glass with lime juice.