Sorry, the video was not found

Lottie Moss is living the real life version of raucous comedy The Hangover after adding to her collection of body inks with a face tattoo after a night on the town.

The younger sister of supermodel Kate Moss revealed her latest ink, which reads ‘lover’, to her social media following in a series of documentary-style clips and pictures.

Posing in different positions to make sure the mark was visible from all angles, the OnlyFans creator made it clear she wasn’t interested in hearing anyone’s opinions of her newest permanent decision.

In one clip, the 24-year-old added a warning to not ‘drink alcohol kids!’ and continued on admitting she ventured into the tattoo parlour after a wild night of partying. 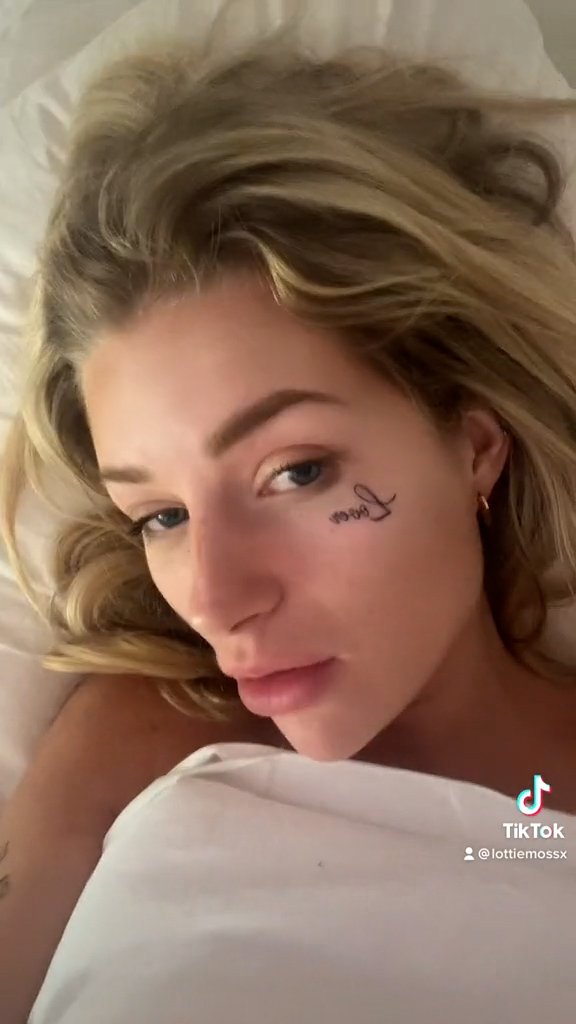 Moving on to address hate she preempted she would receive on the video sharing app TikTok, the model was seen mouthing to an audio that slammed naysayers.

The video footage was uploaded alongside the caption: ‘When people say they don’t like my new face tattoo,’ that nodded to the new etching that sat below her right eye, on her cheek.

More clips of the eventful evening showed the blonde beauty taking a seat in the tattoo artist’s chair as they put pen to skin.

The word was written in a cursive style and despite the painful process, Lottie appeared relaxed as she offered a little smirk to the camera as she was getting inked.

Her latest addition came after she informed fans of her ‘tramp stamp’ on her lower back in September.

Permanently inking a heart with flame-like lines surrounding it across her body, she uploaded a photo with the words: ‘I got the cutest tramp stamp ever,’ accompanying it.

The famous sibling was no stranger to tattoos however as she already sported a series of designs from birds to cheeky slogans such as ‘not yours’ that sits across her bottom.

Lottie‘s recent escapades follow a stint in rehab for a drug addiction earlier this year.